The first round of the 2021 PIHL Playoffs is in the books. Several upsets and other close contests made for an exciting night at the rink.

No. 4 North Allegheny 5, No. 5 Seneca Valley 0
Two goals each by Trey Gallo and Austin Peterson backed by a Josh Bailey shutout gave the Tigers a convincing win over Seneca Valley.

No. 7 Mt. Lebanon 2, No. 2 Canon-McMillan 1 (UPSET)
The upset of the evening in Class-3A featured a close one at the RMU Island Sports Center. Sam Falbo and Conner Ribstein gave Mt. Lebanon a 2-0 lead that they didn’t relinquish. The lone Canon-McMillan goal from Zak Wilcox was not enough to get past Blue Devil goaltender Austin Martin.

No. 3 Pine-Richland 4, No. 6 Upper St. Clair 2
The last time these two teams met in the playoffs, the Pine-Richland Rams took down the Upper St. Clair Panthers, 7-5, in the 2019 Class-2A Penguins Cup Finals. Although the score was lower Monday, the stakes were higher in this Class-3A matchup. After a 2-2 first period, Lucas Enos and Charles Mill scored 20 seconds apart in the second and James Saber made 18 saves to advance the Rams to the semifinals. They lost the chance to play their semifinal game last season due to the COVID-19 pandemic. 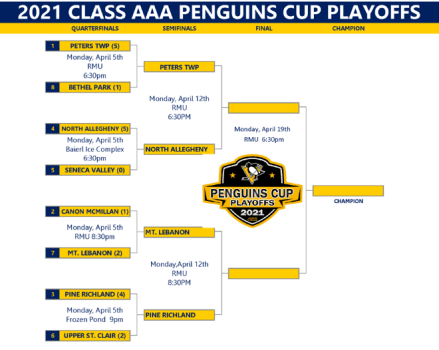 No. 1 Baldwin 4, No. 8 Penn-Trafford 1
Penn-Trafford may have backed their way into the postseason, but Eddie Nowicki backstopped the Highlanders over the Warriors. A 28 save performance with plenty of offensive support from Keith Reed, Dyland Belak, and Carson Kress clinched another date with Thomas Jefferson for Baldwin. Neither team got to play their championship game last season, and with Thomas Jefferson elevated to Class-2A this season, expect this semifinal to be a wild one as each looks for a redo.

No. 5 Thomas Jefferson 7, No. 4 Armstrong 2 (UPSET)
All cylinders were firing for the Jaguars as they pounced all over the River Hawks thanks in part to a four goal performance from Hunter Fairman. The stage is set for the third matchup of the season between powerhouses Baldwin and Thomas Jefferson.

No. 7 Franklin Regional 4, No. 2 Hempfield 3 (OT) (UPSET)
Franklin Regional needed overtime, but a win is a win and the Panthers will be moving on thanks to the heroics of Dan Rafferty. From a crowded Southeast division that featured all four teams in the playoffs, it was only fitting this one went the distance and then some.

No. 3 Montour 4, No. 6 Greater Latrobe 3
A back and forth contest led to a Montour win in dramatic fashion. After falling behind 1-0, the Spartans roared back to take a 3-1 lead before Latrobe tied the game 3-3 midway through the third period. Michael Felsing played hero with the game-winning, power play goal at 9:35 of the third and secured a Montour spot in the semifinals. 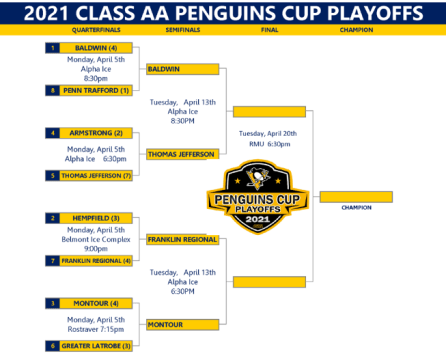 No. 1 Indiana 5, No. 8 North Catholic 1
The top team in Class-1A and the only undefeated team in the league made short work of North Catholic. Despite going 2-for-9 on the power play, three first period goals was two much for the Trojans to overcome.

No. 5 Freeport 4, No. 4 McDowell 0 (UPSET)
Freeport lost the coin toss to claim the Northeast division and the No. 2 seed, and now the Yellowjackets will have to face off against Indiana in the semifinals after cruising to a 4-0 win over a 6-11-1 McDowell team. After a scoreless first period and just a one goal advantage after two, Freeport scored three more in under three minutes to secure the 4-0 victory.

No. 2 Kiski 5, No. 7 Greensburg Salem 0
Kiski cruised to a 5-0 win thanks to a hat trick by Stephen Rayburg and a shutout by Evin Brice. 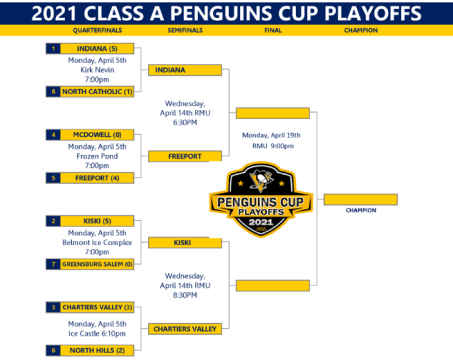 No. 1 Ringgold 5, No. 8 Avonworth 2
After what started as a goaltending dual and what looked like a potential for a huge upset, Ringgold reigned victorious over Avonworth, 5-2.

No. 4 Bishop Canevin 3, No. 5 Connellsville 2
Bishop Canevin snuck by Connellsville after fighting through a 2-2 tie after two periods. Ty Serakowski scored the game-winning goal just 1:37 into the third period, but it was enough to get the Crusaders into the semifinals.

No. 6 Wilmington 3, No. 3 Carrick 2 (UPSET)
One of the other big upsets of the night featured a Wilmington victory over Carrick. After Nick Cartwright opened the scoring for Wilmington at 1:22 of the first, Lexi Jones and Tanner Heidkamp gave Carrick a lead in the second. Andrew Cartwright tied the game 2-2 for Wilmington with less than two minutes left in the second period and Drake Tomak was the hero at 9:15 of the third to secure the 3-2 win and a date with Neshannock in the semifinals. 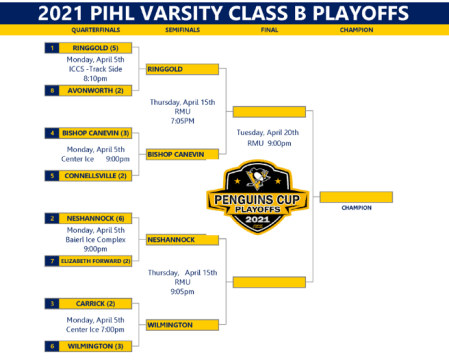