HARMAR Twp., Pa. — The semifinals of the College Hockey Mid-America playoffs featured two matchups that anyone could have expected to be close games. On the heels of a 4-2 first-round win over Pitt on Friday, the No. 6 Robert Morris Colonials (11-15-4, 4-7-3 CHMA) used a four-goal third period (after a scoreless first and a 2-2 second) to upend top-seeded Indiana University of Pennsylvania (15-15-1, 12-2 CHMA), 6-3, in their College Hockey Mid-America semifinal on Saturday afternoon at Alpha Ice Complex.

The second semifinal matchup saw the No. 2 Duquesne Dukes (13-18-1, 10-4 CHMA) fall to the No. 4 Slippery Rock Pride (22-10-3, 9-4-1 CHMA), 5-1, after another closely contested game. After one period, the game was scoreless. After two, it was tied 1-1. A four-goal third period, much like the concurrent IUP-Robert Morris game that was unfolding next door, helped Slippery Rock punch their own ticket to the championship.

IUP-Robert Morris
The first two matchups between IUP and Robert Morris were closely contested games, with the Crimson Hawks victorious each time, by scores of 2-0 and 2-1. The third meeting of the season on Saturday afternoon was no different. Following a scoreless first period, the Crimson Hawks and the Colonials alternated goals through the second before the floodgates opened for Robert Morris in the final 12 minutes of the contest.

IUP drew first blood 5:52 into the second period, when Dominick Glavach deflected a Vinny Casale shot past RMU goaltender Kevin Mackey on the Hawks’ 21st shot of the game. The Robert Morris power-play unit used strong puck movement around the perimeter during an ensuing Zachary Kutch tripping minor and Joseph Zottola set Stefan Krupski up for his first goal of the season, a centre-point one-timer at 7:43 to tie the game at one goal apiece.

Casale found the back of the net for the Hawks with just over eight minutes left in the frame, tipping a Glavach shot into an open right side of the RMU cage to lift the Hawks to a 2-1 advantage, but again the Colonials roared back. With 5:08 left in the second period, Hachmeister — who registered a goal and an assist on Friday against Pitt — carried the puck into the IUP zone up the left-wing boards, angled in from the dot to beat a defender, and fired a close-range wrist shot past Hawks goalie Tyler Kurtz to again tie the game.

The third period began in similar fashion with a Tyler Speis wrist shot from the top of the left circle giving the Hawks a 3-2 lead 5:52 in, but the Colonials’ third comeback could not be parried. Defenseman Raymond Rose tied the game with a snipe from the right point at 8:12 before Nathan Mickey gave RMU their first lead of the game with just over 10 minutes to go by way of a close-range goal directly off an attacking-zone face-off. After killing off a Dillon Joyce high-sticking minor, the Colonials extended their lead to two when Jeffrey Millin generated a near breakaway chance out of the neutral zone and fired a 15-foot wrist shot over Kurtz’s glove with 4:14 left.

Up 5-3 in the closing minutes, the Colonials protected successfully against an IUP extra attacker and Hachmeister sealed the game with his second goal, an empty-netter from his own blue line with 64 seconds remaining.
Defenceman Andrew Hachmeister and forward Joseph Zottola combined to have a hand in five of the six Colonials’ goals, while Kevin Mackey recorded 39 saves in the victory. In all, Robert Morris was 2-for-3 on the power play, while they killed off all four penalties they were assessed. Kurtz stopped 32 of 38 Colonials shots in the loss.

Robert Morris takes on Slippery Rock in the CHMA championship game on Sunday, March 3 at 12:20 PM at Alpha Ice Complex. 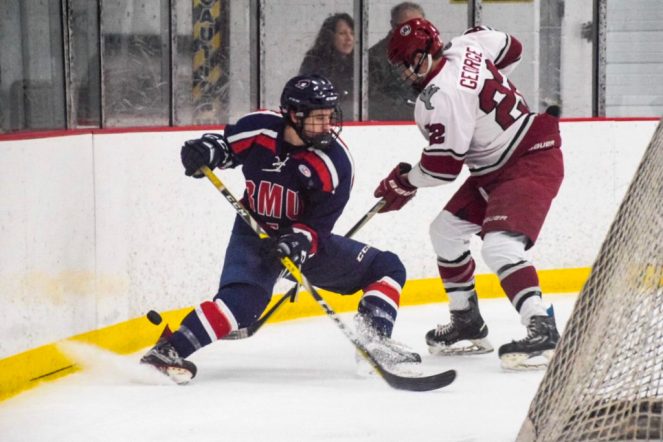 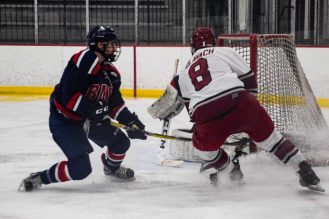 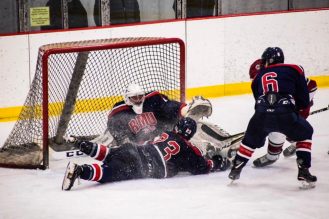 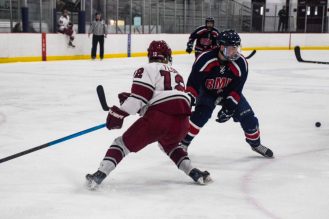 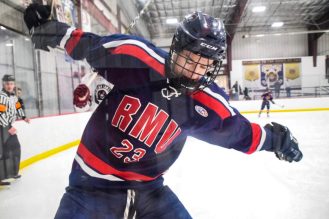 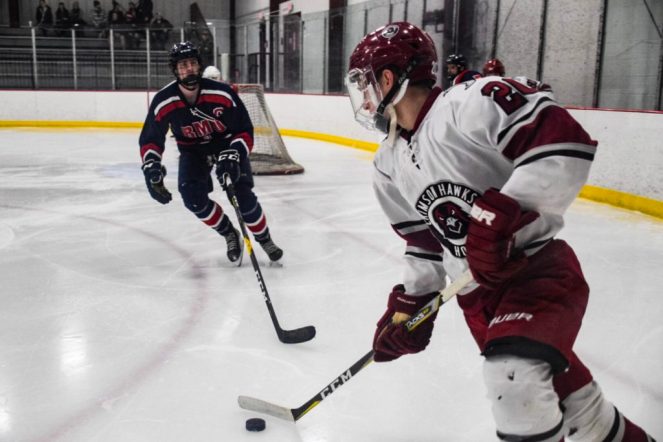 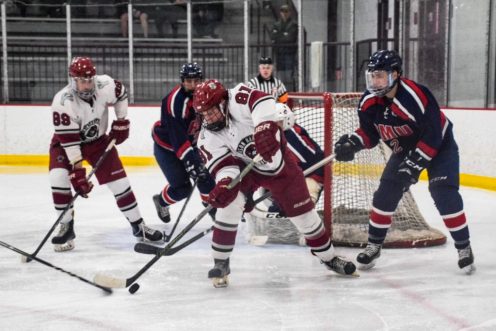 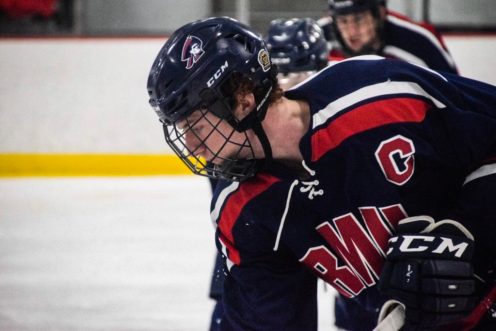 Duquesne-Slippery Rock
The Dukes and Pride split their regular season series, with the away team coming away with the victory each time. The Dukes outscored the Pride in those two matchups 7-6. In the matchup that counted, though, it was the Pride who pulled away.

After a scoreless first period, Jamie Mauro broke the scoreless tie with a wrist shot just over the blocker of Duquesne goaltender Alex Taylor. Dukes forward Martin Hubert was called for a hooking minor on that same play and Slippery Rock attempted to take a two goal advantage with their power play unit, but Taylor stood tall. With under five minutes to play in the second period, Matt Doman tied the game 1-1 for the Dukes and the teams went into the second intermission with hardly any more answers for the opposing netminders.

The third period was all Slippery Rock. At the 8:04 mark of the period, Antonio Esposito broke the tie to give the Pride another lead. This one would remain, as Mauro got his second of the game at 13:50 and Kevin Koett joined the scoring party at 17:27. The empty net goal by Connor Ackerman with under a minute to play sealed the deal and pushed Slippery Rock into the championship game against Robert Morris at 12:20 PM on Sunday, March 3 at Alpha Ice Complex. 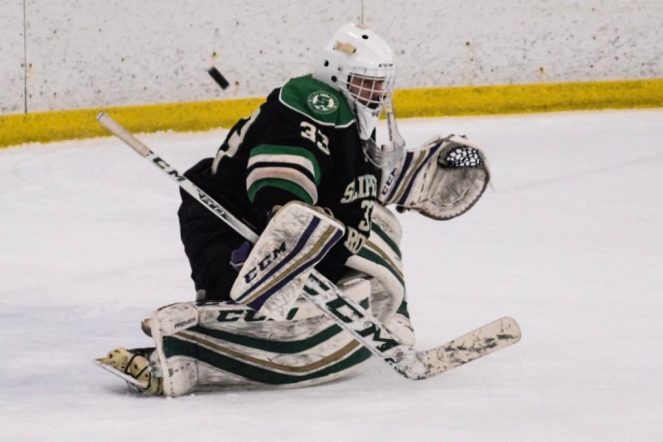 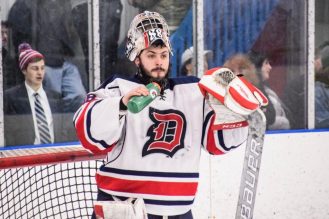 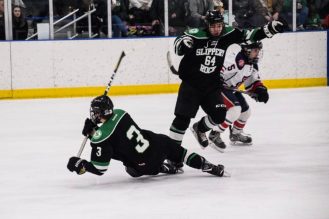 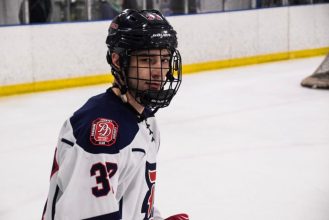 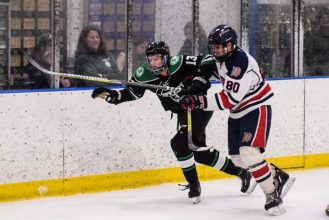 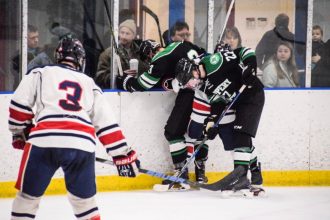 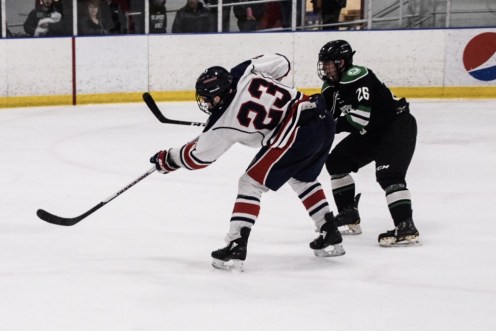 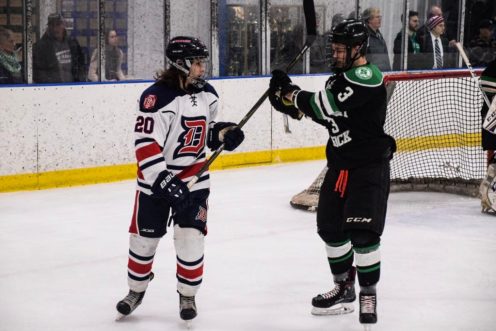 No. 6 Robert Morris defeated No. 1 IUP, 6-3, after upsetting Pitt 4-2 on Friday night, to secure a spot in the CHMA Championship. They will face No. 4 Slippery Rock, who defeated No. 2 Duquesne on Saturday, 5-1. The championship game will be at Alpha Ice Complex on Sunday, March 3 at 12:20 PM.