PITTSBURGH — With the 2019-20 ACHA season just over a month away, it’s time to take a closer look at the Mid-America conference and which matchups to pay close attention to this season.

Last season saw some teams improve their standing from the season prior. IUP and Duquesne went from sixth and seventh, with five wins each, to first and second with 12 and 10 wins, respectively. Slippery Rock improved from seven wins to nine wins, once again claiming the fourth seed in the CHMA playoffs. Other teams did not fare as well. Pitt, Robert Morris, and John Carroll all saw their conference win totals drop last season, despite still making the playoff field. West Virginia missed the playoffs for the second straight season and the 2018 CHMA runner-up Mercyhurst Lakers missed the playoffs as well.

With all of this movement in mind, here are three series that should be exciting to watch and could have significant implications for the 2019 College Hockey Mid-America playoff field. 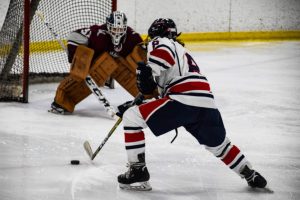 The Duquesne Dukes doubled their conference win total from two seasons ago, finishing with a record of 10-4 last season. They either swept or split with every team in the conference except IUP. The Hawks took both games, 5-1, and kept Duquesne from getting the top seed in the playoffs. Although Duquesne has an obvious rivalry with crosstown foe Pitt, Dukes-Hawks is quickly becoming one of the hottest rivalries in the conference. 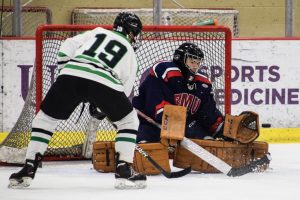 Slippery Rock hoped their regular season success had prepared them for the challenges of playoff hockey, but Robert Morris stunned the Pride in overtime of the conference finals and punched their ticket to the big dance instead. Unfortunately, fans will have to wait until January 10 and February 22 to see these two teams square off this season in what should be two electric matchups, especially with potential playoff spots on the line. 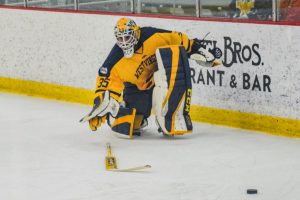 Move over, Pitt Panthers. The West Virginia Mountaineers have a new Backyard Brawl opponent and it’s the Duquesne Dukes. Three of the last four matchups between the clubs have gone to overtime, with Duquesne taking two overtime victories last season and a regulation win in 2017. Even the game West Virginia came away victorious from was a mere 3-2 shootout win. The clubs are set to match up in Harmarville at Alpha Ice Complex on October 12 and in Morgantown at Morgantown Ice Arena on February 1.