HARMAR Twp., Pa. — The Robert Morris Colonials punched their ticket to the ACHA National Tournament in Frisco, Texas by defeating the Slippery Rock Pride, 8-7, in a thrilling overtime game at Alpha Ice Complex Sunday afternoon. In what was the first year that the conference awarded the auto-bid to the playoff champion instead of the regular season champion, the Colonials held on after a 5-0 lead evaporated in the second and third periods, only to net the power play goal in overtime.

The game was anticipated to be as even as Saturday’s semifinal games were. Robert Morris had no interest in playing another close game, though. The Colonials jumped out to a 4-0 lead in the first period. Nathan Mickey started the scoring off just 1:20 in to set the pace. Joseph Zottola added one of his three goals at the 4:36 mark. Stephen Krupski added his own tally just over the halfway mark on a Colonials power play and Zottola got his second with just under a minute and a half remaining in the period. Robert Morris outshot Slippery Rock 20-7 in the first period.

Zottola then picked up in the second where he left off in the first. He rifled one past Slippery Rock goaltender Kevin Belanger, on another Robert Morris power play, to make the deficit 5-0. Unfortunately for the Colonials, if they didn’t want a close game, they never asked Slippery Rock for their opinion. The Pride responded with an even strength goal from Jamie Mauro and two power play goals by Thomas Kimmick and Shane Riley to cut the lead to 5-3 after two periods.

It was then the Pride who picked up in the third period where they left off in the second. Connor Ackerman netted a  power play goal and an even strength goal just 1:55 apart to tie the game 5-5. The Colonials pulled ahead once more with Mickey’s second goal of the game at 13:11, only to have it tied again at the hands of Kimmick for his second goal of the game for Slippery Rock. At 15:39 of the third period, the Pride took their first lead of the game off the stick of Nate Mettenburg, to lead 7-6.

Slippery Rock would have easily cruised to the victory had it not been for two simultaneous penalties by Shane Riley and Nate Mettenburg. Two kneeing minors at the 16:20 mark gave Robert Morris a 5-on-3 power play. The Colonials spent much of that time in the offensive zone, but couldn’t find the back of the net. The Pride’s 3-man penalty kill was stopping everything – until the last five seconds. Zach Gielarowski got his second goal of the season with five seconds let on the two-man advantage to tie the game 7-7. After several unsuccessful pushes by both teams, the game headed to overtime, the first overtime game of the CHMA playoffs in 2019.

Each team had several chances to end the game and celebrate with the trophy, but each goaltender stood tall – Kevin Mackey for Robert Morris and Kevin Belanger for Slippery Rock. The deciding factor was Connor Ackerman’s tripping penalty for the Pride early in overtime. Each team, up through regulation, was 3-for-8 on the power play. Robert Morris took full advantage once again of the man-advantage as Andrew Hachmeister put the overtime game-winner behind Belanger as the Colonials threw their gear, and all their cares, into the air in celebration.

In all, Kevin Mackey made 32 saves on 39 shots for the Colonials. Slippery Rock’s Kevin Belanger made 42 saves on 50 shots.

A a consolation prize for Slippery Rock, forward Jamie Mauro was named playoff MVP. Mauro had three goals and four assists in three games over the weekend as the Pride knocked off John Carroll and Duquesne and fell to Robert Morris.

The Colonials receive the CHMA automatic bid to the ACHA National Tournament, held March 21 through March 26 in Frisco,Texas. The final Division 1 rankings will be released on Wednesday, March 6 and will determine the 20-team field for the playoffs, which include the six conference champions and the next 14 highest ranked teams. Seeding will be based on rankings, with the conference champions who are not already ranked bumping the lowest ranked team in the top-20. 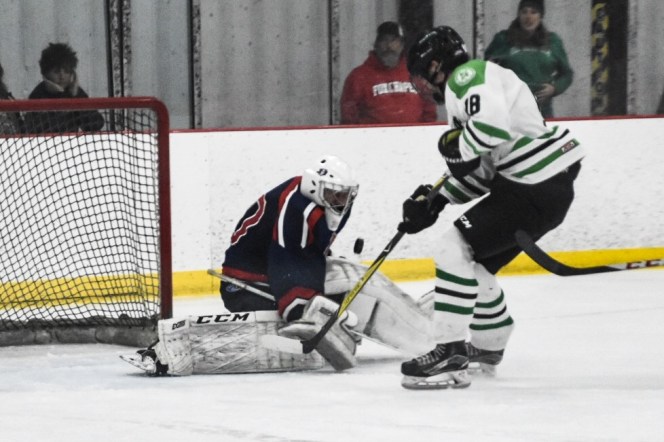 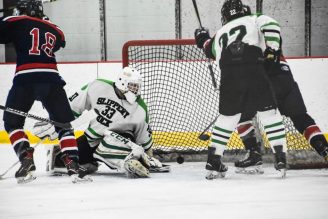 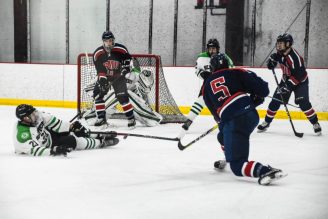 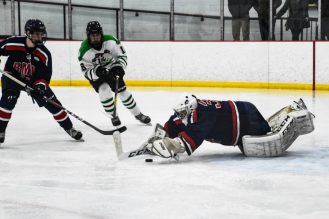 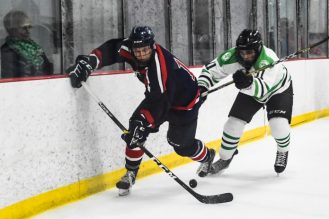 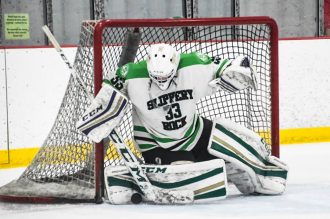 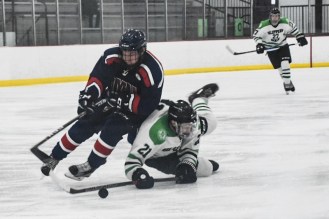 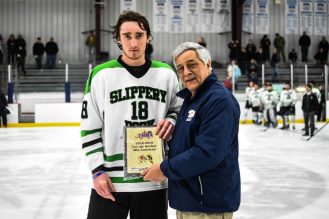 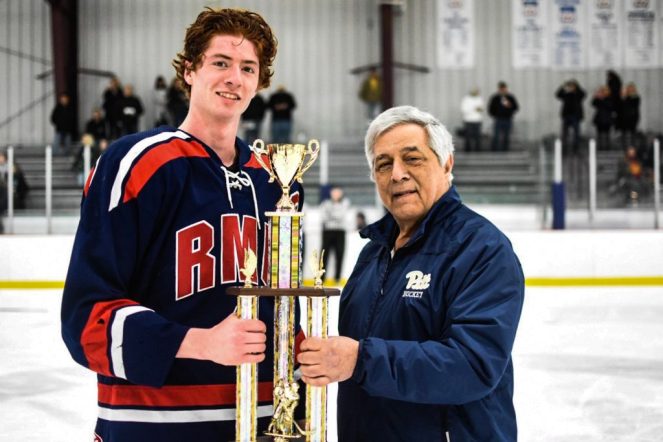 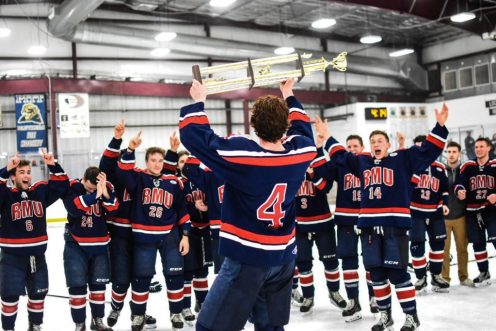 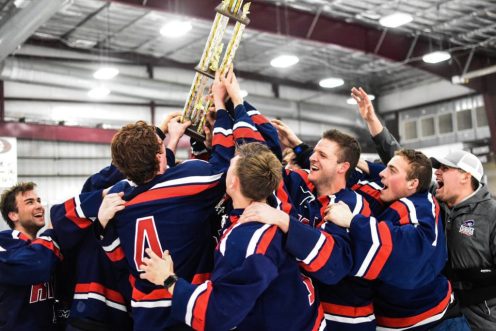