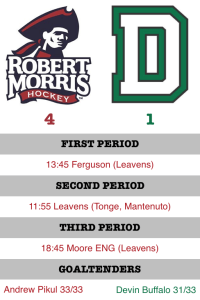 Junior goaltender Andrew Pikul delivered the performance of his career Saturday night at 84 Lumber Arena, collecting his first win and shutout as the Robert Morris Colonials rode his 33-save  to a 3-0 victory in the opening match up of their weekend series with the visiting Dartmouth Green.

Pikul credited his teammates who made the job somewhat easier with some active sticks and rebound clears at critical moments. However, as the game went along, he made some fantastic saves on his own to preserve a two goal Colonial lead in the third period, with some that could be put on a highlight reel.

“I think we felt confident as a team, we had a good week of practice and all the guys did a great job of battling out there tonight,” Pikul said. “Anytime you get a shutout, it’s obviously just not the goalie doing it. The good team effort helped and I thought we played well.  Everyone battled, everyone did their part, the forwards were back checking really well.  Coming off the bye week everyone had a little rust to shake off but as the game went along everyone started to play a lot better.”
After some early rust went away for both teams who both had the previous weekend off, Colonials drew first blood when leading scorer Brady Ferguson cut to the middle of the ice and took a well-timed pass from Daniel Leavens, which he buried past starting Dartmouth goaltender Devin Buffalo at 13:45 of the first period.  From that point on, the Colonials looked to be in control, amassing a 18-12 first period shot advantage. In the final minute, Dartmouth brought considerable pressure as Pikul stood tall, keeping his team in the driver’s seat at the end of 20 minutes.
The second frame saw more Dartmouth shots and pressure and more saves from Pikul in the early going which was interrupted when the Colonials found themselves the recipients of back-to-back power play opportunities starting at the 4:00 minute mark.  However, they couldn’t capitalize on either chance as the precarious lead remained.   On the other side of the coin, Dartmouth could some up with no answer thanks to Pikul.
“Andrew has all the capabilities of being a very good goaltender,” head coach Derek Schooley said. “His first start didn’t go very good at RIT and he’s had to come in and been put in some tough situations. I thought he was outstanding in the third period and he was our player of the game tonight for sure. He did everything that he needed to do.  He was exactly what this team needed coming out of a bye week. “
Senior forward Daniel Leavens gave Robert Morris some breathing room just past the halfway point of the second period when he put the puck over Buffalo’s shoulder with a rising shot on a puck just outside the crease for his second point of the night.  The lead seemed to put the Colonials in a relaxed mode throughout part of the second and a long stretch of the final period.
“I thought we were outstanding in the first period and I thought it was an even second period but I thought in the third, we kind of stood around and watched and hoped that we were going to finish the game. It’s not how we want to play when we have a 2-0 lead.  We let them hang around, and they kept coming.”
Dartmouth then went to work, creating some prime opportunities which Pikul would sometimes flash leather on, which included a spectacular glove save on a shorthanded breakaway.  The Green also ratcheted up their physical game in the final 20 minutes with several big hits that Colonial defenseman Alex Bontje recognized and returned with several big open ice hits.
Dartmouth defenseman and Pittsburgh area native Tim Shoup went for a big open ice hit at the 10:00-minute mark that hurt his team’s comeback chances when he hit Colonial forward Matthew Graham and was given a game misconduct and a major penalty, as Graham took several moments to get back to his feet. Graham would return to the game, but Dartmouth would lose five valuable minutes to work with as Pikul stopped several short handed chances during the five minute Colonial man advantage.
Dartmouth coach Bob Gaudet elected to pull Buffalo with two minutes remaining in one last gasp to salvage a good result, but Timmy Moore was able to seal the victory for the Colonials with an empty net tally at 18:45.
The two teams wrap up their weekend series  Sunday afternoon at 2:05 PM at PPG Paints Arena.