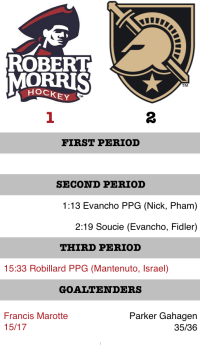 NEVILLE TWP. — Coming into Saturday’s game between Robert Morris and Army West Point at 84 Lumber Arena, RMU’s Francis Marotte and Army’s Parker Gahagen were first and second in the nation in save percentage amongst qualifying goaltenders, so it shaped up as a battle of goaltending.

While Marotte escaped largely untested, Gahagen was a veritable brick wall for the Black Knights, turning aside 35 shots, including 20 in the third period, as Army held on for a 2-1 victory.

“I think their goalie played outstanding,” Robillard said. “He stole the game there, especially at the end with so many chances. … He’s a great player and he definitely helped them win tonight.”

With the score 2-1 late in the third, it was an all-out assault on the Army net, as the Colonials fired chance after chance on Gahagen, but were unable to find the twine, even on several tips, deflections and rebounds.

“Hats off to Gahagen at the end there,” said head coach Derek Schooley. “I don’t know how he was keeping those pucks out. They were hitting him, they’d hit a leg and still hit him. It was amazing, actually, how all of them were staying out.”

“We’re not disappointed in our game tonight,” said forward and alternate captain Daniel Leavens. “We’re obviously disappointed in the result, but if you look at the last four or five minutes there, we had our chances. Even in the first two [periods], we had some good looks. It was just one of those nights where the hockey gods weren’t on our side.”

The first two periods featured some low-event hockey as the tight-checking Knights ground down the Colonials’ offensive attack. Army is one of the most physical teams in the country, and playing against them two nights in a row is a tough ask for any squad.

“They’re definitely a physical team,” Robillard said. “After the first night, you wake up with some bumps and bruises. The next game, you know you’re coming to battle. They never take a shift off. They’re always finishing their checks and looking to outwork anyone. It’s definitely tougher the second night, but I thought we brought it to them, we just couldn’t find a way to put the puck in the back of the net.”

In the span of 1:16 at the beginning of the second period, Army turned a fluke bounce and a misplay into a two-goal advantage and the Colonials would have to go to work to create a comeback, never an easy proposition against the Black Knights.

“They’re a tough team every time you play them,” Leavens said. “They’re a hardworking team. They block shots. They play to their system and play it, well.”

That effort started with a power play goal by Robillard at the 15:33 mark of the third to set up the furious finish. It was Robillard’s second goal of the season and first goal on home ice in over two years, as multiple injuries sidelined him for most of the 2014-15 and 2015-16 seasons.

“I’m not really focused on individual stats,” Robillard said. “It would have been nice to get the win. We were really pushing at the end.”

Robillard’s rebound marker made the power play 1 for 8 on the night — not good enough for Schooley’s standards, especially the top unit.

Marotte got the start for the second consecutive night, but it wasn’t because of the injury to senior Dalton Izyk. Izyk had been hit in the head by the knee of teammate Timmy Moore last weekend in Canisius and missed half of Friday’s game and all of Saturday’s, but with Marotte playing so well, Schooley decided to stick with the hot hand.

It wasn’t as if Marotte was asked to be great with the Black Knights only taking 17 shots.

Schooley didn’t commit to any specific split for playing time going forward, other than saying that the expects Izyk to play significant minutes for his team as the season goes on.

Robert Morris has a home-and-home with Ohio State next week. The Colonials and Buckeyes will play in Columbus Friday night and at 84 Lumber Arena Saturday night.