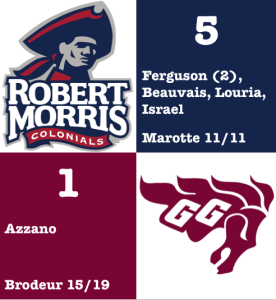 NEVILLE TWP, Pa. — If Saturday’s preseason tilt between the Robert Morris and Ottawa Gee Gee’s is any indication of what to expect from the newest components of the Colonials’ 2017-18 roster, then a very good thing has just become even better.

Coming into the night, the goal for the Colonials was simply to get some contact with an opponent and to knock the offseason’s rust while finding a way to win and stay healthy after. They got that started with a goal from Ferguson just 14 seconds into the contest, and then gradually began to look like a team putting it together.

“We had 9 hours and 20 minutes of practice,” head coach Derek Schooley said.”We had a lot of returners and we just wanted to get some kinks out. I thought we were good in some areas and sloppy in other areas, but it’s hard, when you’ve got 15 forwards and eight defensemen, to keep everybody active in the hockey game.”

The deep bench allowed Schooley to give every player a chance to take shifts, while at the same time giving him an opportunity to visualize what combinations worked, and which ones needed some work.

“I liked a lot of stuff that we did,” he said. “I thought we played with a little bit of energy, we played with some intensity. We need to be a little better in our own end and we have to be better with the puck at our blue line. We gave up some odd man rushes. For the first game, you’re going to make mistakes. All I wanted was effort, I wanted compete level and battle level, and tonight gave me a chance to play everybody. Now I know what I’m going to get from everybody. Today was just about seeing what we had, seeing our experiments and what we needed to do and play against somebody other than ourselves.”

COMFORTABLE AND READY TO CONTRIBUTE

The story of the night was the performance of two key pieces to the upcoming season. Louria had spent the past year skating and practicing with his teammates and his game showed it as he seamlessly blended with the top line consisting of Ferguson and Alex Tonge. His goal at 11:03 of the third frame capped the scoring on the night, giving the UMass-Lowell transfer a three-point night in his first game as a Colonial.

“It’s really fun with a culture like this that’s been established,” Louria said. “It’s a lot of older guys and a lot of veteran guys that know what it takes to win. It’s been a winning culture for a while and I’m just trying to fit into that. Obviously, those guys are great players. It’s really easy to play with them, just move the puck and get open and they can make plays as well, just keep your stick on the ice and good things will happen.”

Meanwhile, Beauvais was making his presence felt with a timely goal to close out the scoring in the second period, a goal that gave the Colonials a three-goal margin. The former Bemidji State defenseman found himself paired with Bontje, and the two looked like a top pair that may be among the very best in the conference. Beauvais found the change of systems, scenery and pace a refreshing change, and his new surroundings appear to be very much to his liking.

“We really push the pace and it’s been really fun to be a part of,” Beauvais said. “I think it definitely plays into my game and a lot of guys games on our team here.”

Not appearing on the score sheet but looking as if he will be pushing for a spot on opening night was true freshman Nick Prkusic, who joined the thick of the contact in one way or another on seemingly every shift while putting up two shots on goal in limited ice time.

PICKING UP WHERE THEY LEFT OFF

Ferguson worked some power play magic with his goal at 12:44 of period, as two huge pieces of the Colonials’ 2016-17 season, defenseman Eric Israel and Tonge, both made their presence felt on the play that put the Colonials up by two markers.

“It was a power play breakout,” Ferguson said. “Izzy gave it to Mike and he threw it across to Tonge and I just went hard to the net and he put it right on my stick and all I had to do was put it in the net.”

Ferguson, who had 58 points in his junior campaign last year, turned in another multi-point performance, the sort that became routine last season. He was not alone in the department of returning players that appeared to pick up where they left off last season. Israel chipped in with a third-period goal and assist while captain Alex Bontje managed an assist and a plus-2 rating on the night.

Tonge, who found the back of the net 20 times in a breakout 2016-17 campaign, assisted twice on RMU goals. Meanwhile, Marotte and Pikul stopped 22 of 23 shots in the victory and never let Ottawa feel any type of reasonable hope of climbing back into the contest. Ferguson seemed optimistic about his team’s performance on the night overall.

“Tonight, we kind of proved that we can get the pucks behind the defensemen and use our speed,” he said. “I think we have a great group of guys and it should be a good year.”

The Colonials travel to Niagara to open their regular season on Friday, Oct. 6. They will then travel to Canisius the following weekend before returning to RMU Island Sports Center Oct. 20 for their home opener against Army.