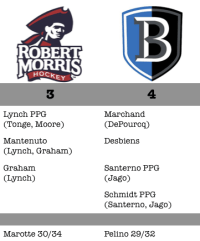 NEVILLE TWP., Pa. — The Bentley Falcons scored two goals in the third period Saturday at RMU Island Sports Center to come from behind and beat the Robert Morris Colonials, 4-3, and force a deciding Game 3 in the teams’ first-round Atlantic Hockey playoff matchup.

“I thought we played pretty good for two periods and actually I thought we had a lot of energy and a lot of chances,” Robert Morris head coach Derek Schooley said. “We just didn’t kill the two penalties to start the third period and chased the game and then we had chances after that, we just needed one more goal.”

The Colonials couldn’t have asked for a better start as Luke Lynch game them an early lead when he pushed home a puck in the low slot on the first power play of the game.  The Colonials then resumed the script from Friday night as they got pucks deep and gave themselves good looks, but could not capitalize on them.  However, Bentley remained unfazed and slowly took over the second half of the period as Charlie Marchand deflected a Drew Callin shot past Francis Marotte to tie the score. Jonathan Desbiens then gave his team the lead heading into the dressing room with a last minute wrap around goal that barely beat Marotte to the post.

To win playoff games, teams need scoring from different sources and on Saturday night, the Colonials got just that as they re-took command of the game. Two sophomores made the difference as Daniel Mantenuto beat Falcon net minder Aiden Pelino from close range at 10:27, and Matthew Graham gave the Colonials the lead with a shot off a face off at 13:56.

The Colonial penalty kill had been one of the highlights of the series through five periods of hockey in the first round, best of three series. However, in the third period the unit blinked twice and it cost them. Freshman sensation Luke Santerno tied the game just 1:00 into the final frame, and almost as soon as the Colonials made a return trip to the sin bin, the Falcons leading scorer, Kyle Schmidt gave them the lead for good.  The Colonials made three more visits to the penalty box in the final period in uncharacteristic fashion which helped thwart their comeback attempt.

“There was a couple of times we got into some penalty trouble and that obviously hurt us quite a bit,” Colonial captain Alex Bontje said. “It’s over, we have to turn the page and look forward to tomorrow. We’re trying to push the pace and obviously we had our chances tonight and we just need to bear down and put some of them in the back of the net.”

For the Colonials, the message seems clear. Stay out of the penalty box, and get the job done on Sunday night. Something they did two years ago when faced with a game three at home against the Falcons.

The teams will meet back at RMU Island Sports Center on Sunday for a win-or-go-home Game 3 at 7:05 p.m.