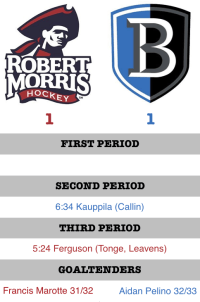 NEVILLE TWP, Pa. — The Robert Morris Colonials may have earned their hardest earned point of the season Saturday night against the visiting Bentley Falcons in a hotly contested battle. Leading scorer Brady Ferguson’s goal at 5:34 of the third period, the only Colonial tally of the weekend, proved to be enough offense to earn a critical point in the Atlantic Hockey standings, keeping their hopes for a first round bye and second round home ice alive and well. However, it was a disappointing weekend for the Colonials who were looking for at least a split on home ice coming into the game. It marked yet another uneven game in terms of performance, something the Colonials will be looking to improve upon heading into the playoffs.

The Colonials came out looking to take the play to the Falcons and did so as evidenced by a 13-5 shot advantage at the end of 20 minutes. But there was no easy way to get a puck past Falcon goaltender Aidan Pelino who turned in another stout performance, allowing one goal on 33 shots. The freshman netminder put together over 105 minutes of shutout hockey on the weekend and gave up very little in the way of rebounds to pounce on for the Colonials.

Meanwhile, at the other end of the rink, Colonials goaltender Francis Marotte was busy turning away 31 of 32 Bentley shots, including some key saves in the third period to help preserve the tie as the Colonial defense kept Bentley’s potent 1-2 punch of Max French and Kyle Schmidt off the score sheet through the weekend. Despite the solid job shutting down the top Falcon scorers, the Colonials couldn’t hold off a Jake Kauppila goal at 6:34 of the second frame which put the Falcons in the drivers seat in a series where goals were at a premium. Bentley out shot Robert Morris by a commanding 14-4 margin for the period and seemed to have taken over control of the game, keeping the potent Colonial offense to the perimeter, and winning the races to loose pucks.

But the final twenty minutes saw Ferguson and company rise to the occasion to give the Colonials a much needed lift to a very valuable point.

“They had a whole bunch of good shifts,” Schooley said. “They win battles down low, they’re not cute, they don’t make tight area plays and they compete hard. They were a catalyst for us, they got us going and provided a tremendous amount of energy for us in the third period.”

Ferguson found a sharp pass from Alex Tonge and buried it past Pelino at 5:34 to knot the score. It was his 45th point of the season, a year which has now seen him eclipse last season’s point total while scoring at a staggering 1.50 points per game.

“My line just got it deep and my line mates made two nice passes and I ended up in front alone and just slid it five hole,” Ferguson said. “I think the effort was there in the first and third tonight period. It’s nice to get a point but it’s also unacceptable. It’s the end of the year and we need to come away with four points.”

The Colonials partake in a home and home weekend set with the Mercyhurst Lakers next Friday and Saturday night.