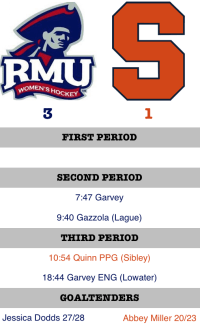 SYRACUSE, N.Y. — As Brittany Howard and Stephanie Grossi skated into the face-off circle for the opening drop of the puck, all that separated No. 7 Robert Morris from second-place Syracuse in the College Hockey America standings were two points.

After sixty minutes, that lead doubled thanks to second period goals by Maeve Garvey and Jessica Gazzola, as the Colonials rolled to a 3-1 victory at Tennity Ice Skating Pavilion.

Garvey later added an empty net goal, but it was her first, scored on a breakaway just after the expiration of an Orange power play that was the dagger. Syracuse had spent all but a couple seconds of the advantage cycling deep in the Colonials’ zone.

“Our first thought on the PK is to not go for the shorthanded goal,” Garvey said. “If we get those chances we try and capitalize. To get a chance like that, right after the penalty expired, I just really wanted to capitalize on it.”

The play was an unusual one for the Colonials, who have not scored a shorthanded goal all season.

“It’s defense first,” said head coach Paul Colontino. “I think our players respect that fact. We’re just getting it deep, getting the change and trying to move forward with our [penalty kill].”

Syracuse cut the lead in half on the power play in the third period, when Megan Quinn put the puck through a screen in front of Jessica Dodds and into the back of the net. Dodds started her fourth consecutive game and is 3-0-1 in that span. Overall, she has a 9-0-5 mark on the year.

GETTING IN ON THE ACT

The Colonials’ second line of Garvey, Gazzola and Amanda Pantaleo has been red-hot lately, but Gazzola has been more of a passer than a shooter as the pivot on that unit. But she turned that trend on its ear, taking the shot on a two-on-one rush that just snuck in under the crossbar for her third goal of the season.

“It feels great,” Gazzola said. “We just keep picking up the pace [when the opponent keys on the other lines].”

When combined with her eight assists this season, Gazzola now has 11 points on the year, equaling the career high the junior forward set a year ago, and she’s done it in 13 fewer games.

The win clinched the season series with Syracuse and extended the Colonials’ CHA record to 10-2-2. More importantly, the Colonials now hold a four-point lead over Syracuse going into Saturday afternoon’s critical rematch.

A loss would have put the two in a tie. The win allows the team to have a little breathing room, something that Colontino isn’t taking for granted

“You’re out there with a possible four point swing,” he said. “To add a bit of cushion is good. It’s confidence for the players and it takes a little bit of pressure off of what we’re trying to do.”

Brittany Howard was held off the scoresheet for the second time in three game. She needs 13 points to pass Rebecca Vint for the most points in Robert Morris history. … Robert Morris will face Syracuse again at the Tennity Ice Pavilion at 3:00 p.m. on Saturday.