RICHLAND TWP., Pa. — The Chatham women played two of their best games during their last weekend of the season, but their recent offensive slump continued, as they dropped a pair of 1-0 decisions to the Manhattanville College Valiants. 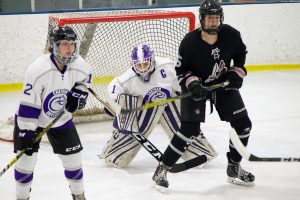 Chatham goaltender Devon Strachan was excellent over the weekend, making 77 saves on 79 shots in two losses to Manhattanville. — BRIAN MITCHELL

The Cougars began senior weekend by once again turning to one of the top goaltenders in the conference in Junior Devon Strachan who did not disappoint. Although the Cougars blocked a high number of shots, Strachan was able to make 10 saves in the first period to keep the game scoreless. At the other end, Manhattanville’s Rose Pijaca stopped all three shots she faced.

The second period mirrored the first as the Cougars took a defensive mindset, continuing to block shots and keep the Valiants from getting to the net. Strachan stopped 12 shots in the second period. As great as their defense was however, the Cougars could not get past Pijaca, resulting in a scoreless draw after two periods of play, with only a single penalty called against each team up through that point.

In the third, the referees seemed to put their whistles in their pockets, allowing the players decide the game. Manhattanville dominated the first half of the period before the Cougars had a golden opportunity to take the lead. Senior Jillian Rowland came in on an odd-skater rush and ripped the puck high off the glass and out towards neutral ice. Manhattanville picked it up at center ice and, with the three-on-one with only Cougar Forward Kerry Carr back to face the rush, Brayden James ripped one in on Strachan. She was able to fight off the initial shot, but the rebound bounced right on the tape of Morgan Wilm who buried it into the empty cage to give the Valiants the 1-0 lead 11:39 into the third period.

The Cougars spent the last four minutes attempting to tie the game by using four players in their own defensive end, while Carr camped out on the offensive blue line hoping for a potential breakaway. Ultimately, Chatham did not get the opportunity to tie the game, resulting in a tough 1-0 loss to start the weekend. Strachan made 31 saves while the Valiant’s Pijaca stopped all 8 shots she faced.

In game two of the weekend, Chatham honored its four seniors, Jillian Rowland, Kristina Block, KJ Frost and Michelle Jones, before puck drop. The Cougars went with Strachan in goal once again while Manhattanville started Taylor Elias. Both teams traded chances in the opening frame, but neither goaltender let one slip past. Elias was able to stop a pair of two-on-one rushes and Strachan saved all 15 shots she faced. 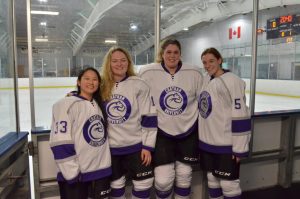 The Cougars found themselves in penalty trouble to begin the second period. The Valiants spent the entire two minutes in their offensive zone, never allowing the Cougars to get fresh players on the ice, as Manhattanville sent everything they could to the net. The Chatham penalty kill bent, but did not break. Madison Black, a Wexford native, had one of her best shifts of the season, as she blocked numerous shots to keep the game scoreless. With three power play chances for Manhattanville and one for the Cougars, both teams traded chances throughout the second period but just like the day before, the third began with no score.

Looking for a different outcome than the day before, the Cougars had their chances, but so did the Valiants. The game remained scoreless at the halfway point of the third. However, Manhattanville continued to push and eventually broke through, as Ellis Smith’s “seeing eye” wrister got past Strachan, giving the Valiants a 1-0 lead with just 4:46 remaining in the game. The Cougars did not go down without a fight. With 2:01 left in the game, Chatham found themselves on a 5-on-3 power play for 39 seconds. They pulled Strachan for the extra attacker, but the Cougars push fell short as they dropped the second game of the weekend by the same 1-0 score. Manhattanville finished the season with 16 wins.

Strachan made 46 saves in the game and stopped 77 of 79 shots on the weekend. For the Cougars, the last five games were a challenge as they were shut out in each, their last goal coming in the third period of a 4-1 win against Kings College on January 26. With the loss, Chatham’s final 2018-2019 record stands at 7-18 -0 overall and 4-14-0 in conference play.

The Chatham men fought their way to a weekend split, falling to Lebanon Valley, 8-4, on Friday before picking up their second upset win of the season, 4-2, over Elmira.

Friday’s game against the Lebanon Valley College Flying Dutchmen was played at the historic Hershey Arena. The arena, built in 1936, was where Wilt Chamberlin scored a record setting 100 points in an NBA game on March 2, 1962.

Chatham turned to freshman Ricardo Gonzalez to start the weekend, who looked to end his solid first year on a positive note. Lebanon Valley gave Gonzalez a rough welcome, beating him three times by the midway point of the first, each goal coming from a different player. Looking to get back in the game, the Cougars answered four minutes later as Eric Hildebrand made it 3-1. The Dutchmen answered at the 18:58 mark of the first off the stick of Justin Hall to take a 4-1 lead at the break.

The Cougars, looking to make a comeback, unfortunately started the second by digging their hole deeper. Lebanon Valley scored just over two minutes into the period to extend their lead to four goals. Chatham attempted a furious comeback, answering with three goals. Tristian Simm got the first at the 3:26 mark before Cory King got his turn three minutes later. Lebanon Valley replaced starting goaltender Tyler Perhac with Matt Forslund (son of Carolina Hurricanes and NBC hockey announcer John Forslund) after that goal.  Michael Lamison, at the 11:11 mark of the second, gave Forslund a warm welcome to the ice to bring the Cougars to within a goal. Momentum quickly shifted the other way, though, as Lebanon Valley got two more goals to take a 7-4 lead at the second break.

The Dutchmen added another goal early in the third as Hall picked up his second of the game just 3:39 in. The Cougars only mustered four shots in the third and fell by a final score of 8-4. Gonzalez made 23 saves on the night as his outstanding freshman season ended on a sour note. Leading the Cougars with two points each were Derek Schrank, Lamison, Simm, and King.

In game two of the weekend, Chatham traveled three hours north to Elmira, New York. The Cougars were looking for their second upset win of the season against the Soaring Eagles after upsetting them 5-1 back on December 7 at Frozen Pond Arena. In that earlier game, Michael Lamison picked up his first collegiate goal and hat trick. Going into Saturday’s game, Elmira still had hopes of capturing the regular season crown in the UCHC.

For their season finale, Chatham turned to sophomore goaltender Matt Calas, who was looking to end his up and down season on a positive note. The first period was controlled by Elmira as they threw 17 shots at Calas, none finding the back of the net. At the other end, the Cougars only managed seven shots on Charl Pretorius, resulting in a scoreless first period.

The Cougars got a quick start in the second period when Derek Schrank broke the scoreless tie  at 1:29 of the period to give Chatham the  1-0 lead. For the next 14 minutes, the game went back and forth until Elmira found themselves on a power play. Chatham Captain Kirk Underwood then got a shorthanded tally past Pretorius for his first of the season to extend his team’s lead to two after two periods.

The third period was the busiest period for Calas. During the first half of the period, both teams had their chances, but both goaltenders were up to the task. Chris Lutz then picked up his eighth goal of the season at 9:03, making it 3-0 Chatham and sending Pretorius to the bench. For the second straight game, the Cougars had chased the starting goaltender, as Pretorius was replaced by Gennaro Anzevino. Chatham looked to get the shutout, but senior Clay Plyler picked up an interference minor at the 14:31 mark of the period, putting Elmira on another power play. They finally got on the scoreboard as Connor Powell got a puck past Calas, making it 3-1. With momentum on their side, Elmira looked to get back in the game, but instead, just seven seconds later off the face off, the Cougars regained their three goal lead when Underwood picked up his second of the game and second of the season making it 4-1 Cougars. Elmira got one more as Chris Moses beat Calas with 1:22 left in the game with the extra attacker. But that was it for Elmira, as Calas shut the door to give the Cougars the season sweep against Elmira, ending their second season on a high note.

Calas made 25 saves on 27 shots in the third period and stopped 53 in the game, earning him UCHC goaltender of the week honors. Leading the way on the offensive side was Schrank, Underwood and Lutz, who each had two points. The upset win not only ended the season on a high note but provided a good ending for seniors Clay Plyler, Matthew Ho, Dan Bellafoire and John Ryan. With Elmira’s loss, the Soaring Eagles finished in second place with a conference record of 12-4-2 with two of those four losses coming to the Chatham Cougars. Chatham ended their second season with an overall record of 6-17-2 and 4-13-1 in conference play. The six wins exceeded last year’s inaugural season win total of two wins and gave coach Michael Callan something to build on in the off-season.