Co-Captain Amber Rennie warms up before the exhibition game against UOIT. -- BRIAN MITCHELL

Amber Rennie has been a key member of the RMU Colonials hockey team since she arrived on campus three years ago. She’s been on the top line and power play and has increased her point totals each season, leading up to a career-high 29 in 33 games as a junior. This year, as she enters her final season, she is ready for a bigger role. The coaching staff clearly felt the same way, as she was chosen as one of the team’s co-captains alongside classmates Maggie LaGue and Kirsten Welsh.

As a co-captain, Rennie will be leaned on as someone to lead the way for a relatively young team. That responsibility doesn’t come lightly to her.

“It’s a huge honor to be named one of the captains this year and I’m super excited to step into that leadership role alongside Maggie and Welsh,” she reflected to PHD’s Andrew Wisneski. “Working with them so far has been great and I’m super excited to see where we can take this team this year. Some new responsibilities are just to be more of a motivator and vocal on the bench and in the dressing room.”

The Colonials enter the season with high expectations. They’ve won the CHA regular season title in back to back seasons and won the postseason tournament earning an NCAA tournament bid during Rennie’s sophomore year. The Colonials team is returning without all-time leading scorer Brittany Howard and CHA first team goalie Elijah Milne-Price,who have graduated. The team was picked second in the CHA preseason coaches poll.

“It’s definitely something that lights a fire in you,” said Rennie,“It’s never easy losing in a championship game and then be rated lower than that team the following year. For me it’s just more motivation next time we play them.”

Helping new players assimilate to life both on campus and at the rink is one of the responsibilities of the captains of the team. However, it seems that all of these fresh faces have not needed much help adjusting.

“All the freshmen have been great so far this year,” Rennie remarked. “It always makes the transition from junior hockey to Division 1 much easier when they come in in great shape. Everyone seems to be working well together and working hard during practice and in the weight room.” 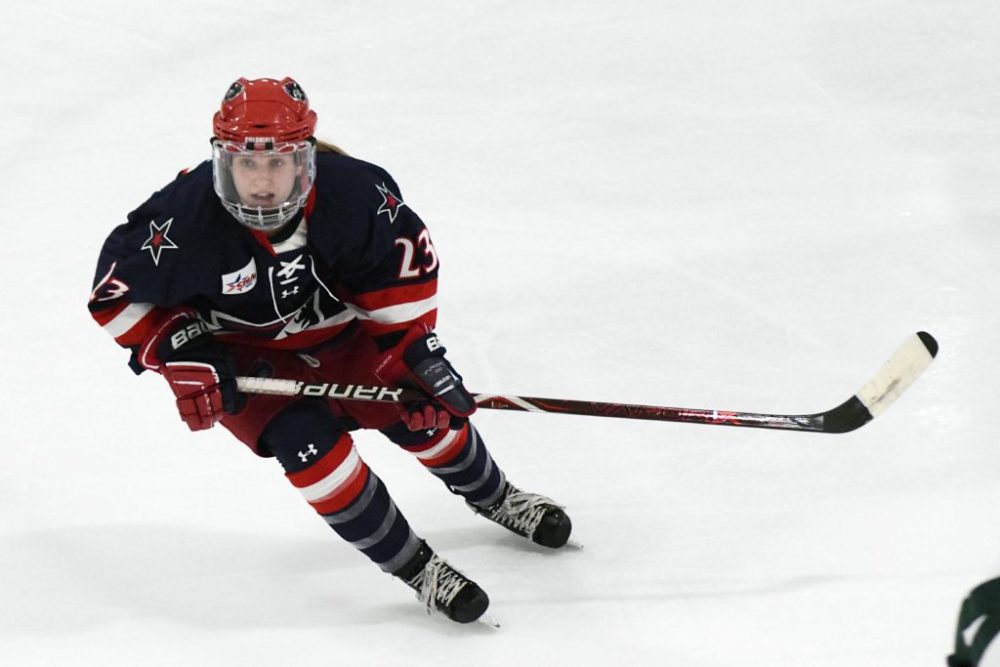 Rennie skates during a game against rival Mercyhurst during the 2017-18 season. — Brian Mitchell

The Colonial got their first game action last week in an exhibition game against The University of Ontario Institute of Technology. The Colonials won the game 6-1, but the result was not the most important aspect of the game. It was about the experience and getting a taste of game action before the results count in the standings.

New comers Krasowski (1G, 1A) and Kollman (1A) both registered points. Goaltender DeSmet played just under 20 minutes in net, turning away all seven shots she faced.

“I thought that the exhibition game went great,” Rennie reflected. “It was nice to see everyone getting to play together in an actual game. It’s a great way to get chemistry going within the lines as well as working on some system things.”

Kollman, a native of Calgary, spent the game on the right wing of two fellow western Canadian natives, Rennie and Jaycee Gebhard. Rennie and Gebhard have spent most of their time on the same line since Gebhard joined the Colonials 2 years ago. They have also played together for years before RMU and have an impressive chemistry on the ice.

While it could be hard getting used to a new winger, the chemistry of Gebhard and Rennie along with Kollman’s characteristics as a player have made for a smooth transition.

“Kollman has stepped in and done great in her role,” she shared. “Since Jaycee and I have been playing together for so long it is always pretty easy for us to pick up right where we left off. Playing with Kollman has been great though. She is a vocal player with a lot of talent so it seems to be going great!” 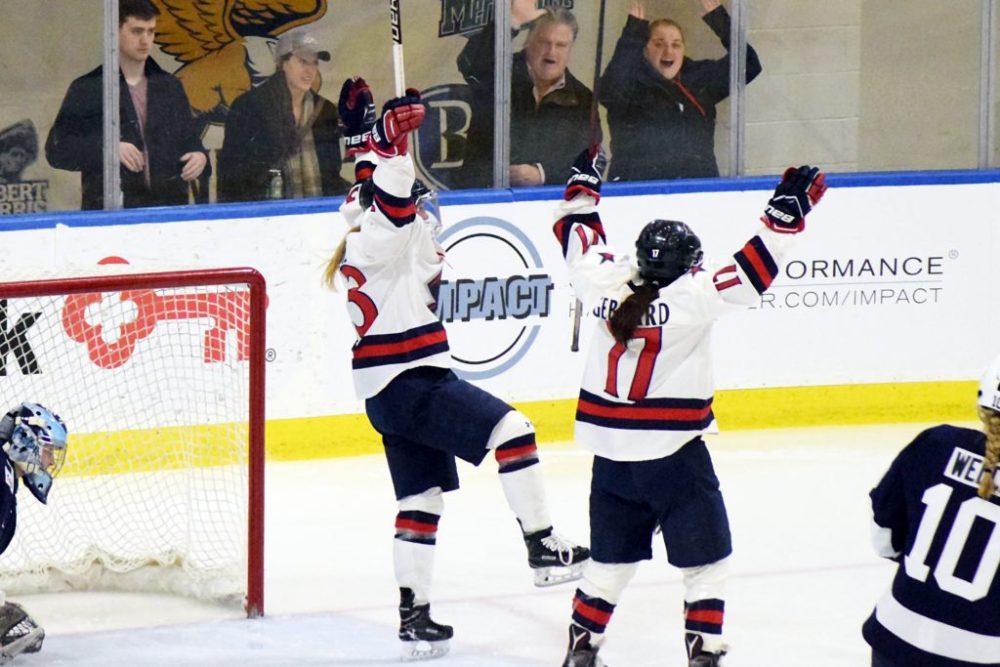 The Colonials have a challenging schedule this year, with a number of ranked opponents. They will travel to the two time defending National Champion Clarkson Golden Knights. They’ll also face reigning Frozen Four competitor Colgate and the longtime power house Minnesota Golden Gophers.

Their first challenge comes this weekend, when they will face St. Lawrence, a team just outside the top 10 in the preseason polls. The Colonials are ready to prove they can handle this tough schedule.

“Playing highly ranked teams doesn’t change our mindset at all,” she said. “We play every game and every team to the best of our ability and try to look past all the rankings and stuff like that. If we are able to do that, then it allows us to focus on our game plan and what we want to do rather than worrying about our opponents.”

Rennie and her classmates know what it’s like to win the championship like they did as sophomores, and also lose it like they did last year. It’s clear what Rennie and the team are striving for.

“My biggest goal for my senior year is to win the CHA’s again,” she remarked. “Since we were able to do it my sophomore year it was a lot of fun and a great experience and I want to get back there this year. I also hope to have the best year for myself personally and I’m really excited to get this all started on Friday!”