Maggie LaGue spent four seasons at Robert Morris, serving as a captain her senior year and amassing 90 points in 135 career games. That point total ranks her eighth all-time in RMU program history and first among defenders.

She was part of RMU’s three straight CHA regular season championship from 2017-19 and played in the Colonials’ one and only NCAA Tournament game in 2017.

When she graduated this spring, there wasn’t a lot left for her to accomplish on the ice at the collegiate level.

So she set her sights on playing beyond college. LaGue is one of several RMU alumnae to play in the Professional Women’s Hockey Players Association’s (PWHPA) “Dream Gap Tour.” LaGue made her first appearance at a recent tour stop in New Hampshire.

The New Hampshire stop of the Dream Gap Tour was loaded with talent, with some of the biggest names in women’s hockey spread across the four teams. Players like Hilary Knight, Marie-Philip Poulin, the Lamoreux twins, and Kendall Coyne were just a few of the noteworthy Olympians that played. The roster was admittedly a little intimidating at first, but the common goal and familiar faces, like come college opponents and fellow Vermont native Amanda Pelkey made it easy for LaGue to fit right in.

“I was definitely pretty nervous about it because you look at your roster and are like, ‘Ok I’m playing with Kendall Coyne.’ But thankfully she was on my team instead of me trying to play against her (laughs),” LaGue said to Pittsburgh Hockey Digest in a telephone interview.

“It was really awesome and it was really cool to play with some girls that I played against in college, so being on the same team as them and just kind of sharing war stories and stuff. Everyone was so nice an inviting, and everyone was there to have fun and for the same reason.”

LaGue was a member of Team Stecklein, which included players like former CHA rival Emily Janiga (Mercyhurst); Annika Zalewski, a friend from USA national camps in high school that played at Colgate and Kendall Coyne Schofield, a two-time Olympian. While it was her first competitive game in over six months, LaGue was able to adjust quickly and fit right in with the star-studded lineup.

“It took a couple shifts to be like, ‘Alright, don’t make stupid decisions, don’t get out of position,'” she said. “But after a couple shifts I got used to it. It was physical, it was fast, and it was exciting.”

LaGue spent most of the weekend partnered on defense with Olivia Zafuto, who played collegiately at Colgate, including a few games against the LaGue and the Colonials. The team’s first game was against Team Flanagan, which they won 6-3.

The championship game was against Team Knight, which consisted of many players from Les Canadiennes, a former CWHL team and some other Canadian Olympians, and of course Hilary Knight. It was a back and forth game, but LaGue’s team came out on top, winning 5-4.

Having played four years at Robert Morris, during what was arguably the program’s most successful stretch, LaGue gained a lot of valuable playing experience against all different types of opponents that she thinks prepared her to play at this next level.

“I think through college I really learned about myself as a player and how to be able to adjust to a certain game speed pretty quickly,” she said. “When we had a couple games against Wisconsin or Minnesota you know it’s going to be a fast-paced game so I was able to kind of have that in the back of my mind. It didn’t really change the way I played. … Just making simple plays, getting pucks out and taking quick shifts was definitely a key to survive.” 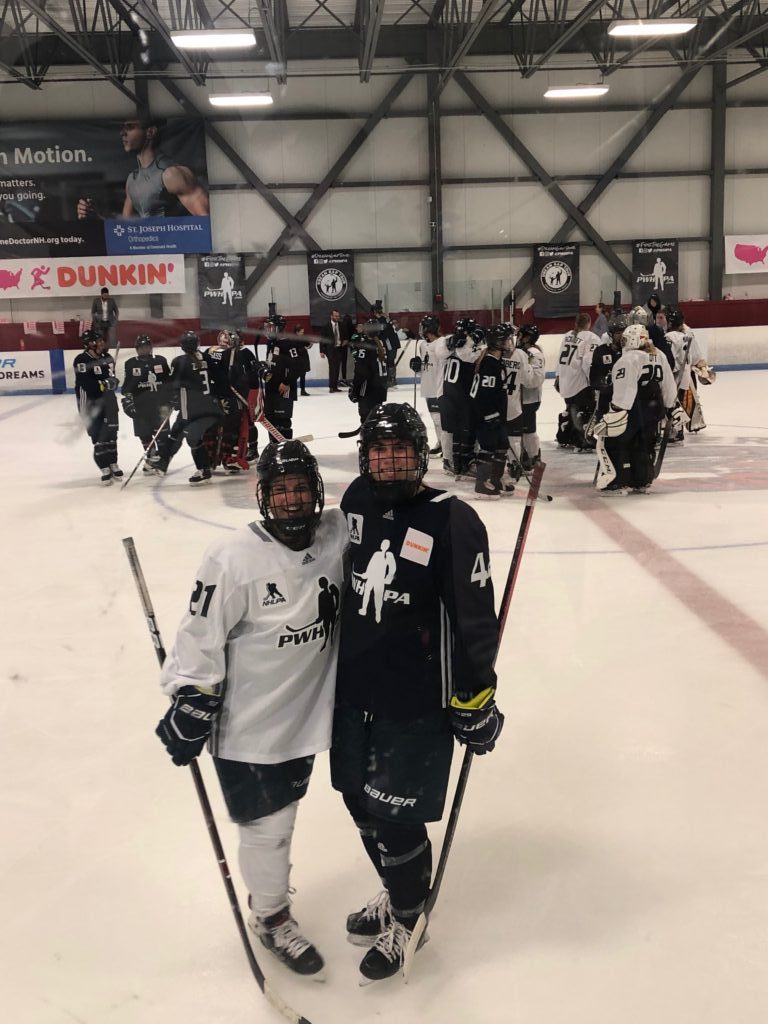 While the game itself was a great, fun, experience, the Dream Gap Tour is about much more than the games themselves. It’s about raising awareness and creating better opportunities for women’s hockey players at the professional level.

“The whole idea with it is to draw attention to the fact in North America the best female hockey players don’t really have a viable professional league to call home,” she reflected. “So being able to showcase our talents across the US helps bring this to light. It was definitely an awesome experience and it went really well.”

This goal really hits home for LaGue, who like many other college hockey graduates, don’t currently have a form of competitive hockey that they view as viable to them. There aren’t many opportunities to play at a high level after moving on from college hockey if you’re not on the radar of your country’s national team.

Up until this year, there were two leagues, the CWHL and NWHL, but the CWHL folded prior to this season. The NWHL is still in action, but like the CWHL, only offers mediocre pay and not enough for a living wage, meaning players have to work full time to support themselves along with playing. The opportunity to play alongside Olympians, National Team players and other elite women’s hockey players was one she really appreciated.

“It definitely means a lot,” she remarked. “I don’t really try to think of myself a lot, not in a bad way, but I know I’m not an Olympian, I know I’m not a National Team player, so to be recognized for my talents means a lot. Other girls are in the same boat too, they don’t have the opportunities for the Olympics or National tournaments, but being able to be out there and make a difference and have fun I think is really important and it makes me very thankful and humbled to be a part of it.”

Along with raising awareness for the need for a viable professional option for current women’s hockey players, this tour also served as an opportunity to inspire the next generation of girls playing hockey. This is something LaGue was familiar with, as the Colonials are very involved in the local amateur hockey scene, thanks to their Big Sisters Little Sisters program with the Pens Elite. However, seeing the impact she and the other players had on a stage like this really meant a lot.

“I can’t say enough about it, it was just so fun and it was eye-opening seeing all these girls coming out to watch you and knowing they look up to you,” she shared. “Maybe you don’t realize it until you’re out there but seeing all those girls in the stands in their jerseys and coming up to you after (the game) was a pretty humbling experience.”

Since graduating and moving back home to Vermont, LaGue has been transitioning to life after college. This has included working full time as a financial analyst for a life insurance company. She’s also gotten involved in the local amateur hockey scene, as a coach of an under-14 travel team. The experience behind the bench is something she’s really enjoyed, and one that has kind of come naturally given her ability to relate to the girls she’s coaching.

“It’s awesome, it’s definitely a little bit different, but a good different,” she explained. “I can kind of relate to how some coaches I’ve had feel, so it’s definitely a learning experience and it’s great. I really enjoy sharing my experiences and knowledge with a great group of girls that really have the potential to go far. Seeing them being eager to learn more has made it worthwhile.” 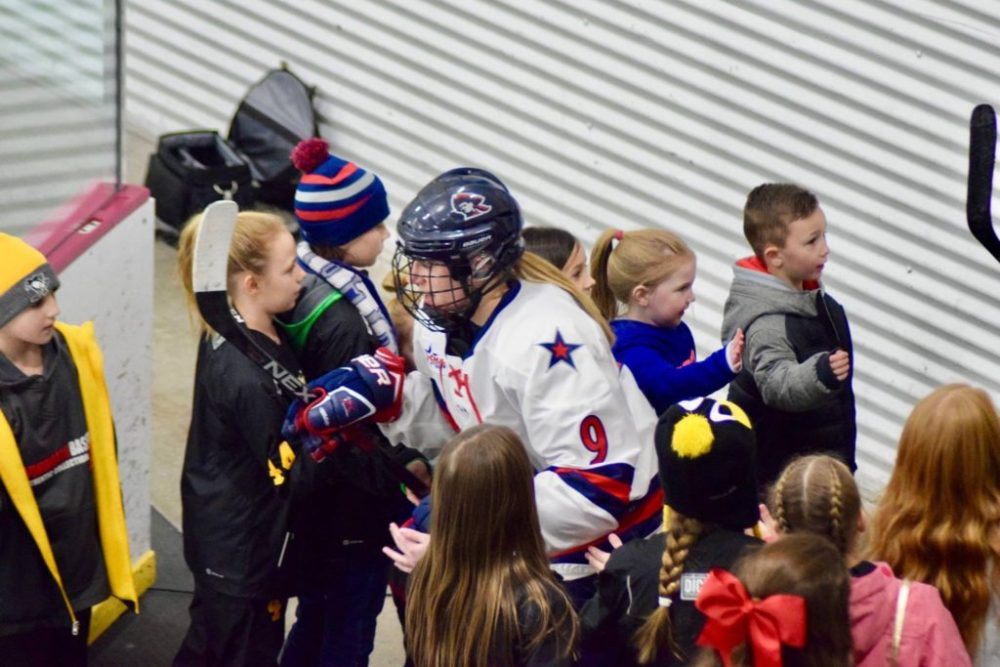 LaGue inspired young hockey players at RMU, and is continuing to do so today as a coach and player –Brian Mitchell

Along with being involved in the game as a coach, LaGue is working hard to stay in shape to continue playing as well. The Dream Gap Tour’s next stop is in Chicago this upcoming weekend, but she won’t be partaking. However, there are going to be more exhibitions and other events moving forward. While ice time is not as easy to come by as it was while she was in college, she has found a pretty good situation to stay sharp.

“I play in a men’s league on Sundays, so that’s my biggest portion of ice time,” LaGue said. “It’s so fun, one of the guys I work with runs the league so it’s a good mix of some ‘seasoned’ with some young talent, so it’s a lot of fun. I try to play forward to skate a little bit more so it’s always fun to switch up the positions.”

LaGue has embraced her new roles in life, like being a financial analyst, hockey coach, and still a hockey player. She also has a new role now as an alum of the Robert Morris women’s hockey team instead of being a player, a big change from the past four years of her life.

She was back in Pittsburgh a few weekends ago, as the team held alumnae weekend in celebration of it’s 15th anniversary season. It took place during the current team’s exhibition against Concordia, and while it was admittedly weird watching from the stands and not being on the ice, the overall experience was one she enjoyed.

“It was so fun seeing a bunch of old teammates and girls that I hadn’t played with but helped mold the program,” she exclaimed. “So being able to meet them and hang out with old teammates that you really don’t see often anymore was so fun. It was kind of sad watching the game because I just wanted to be out there, but it was still great and obviously they’re having a lot of success so far so it’s been great to keep up with it. It’s just totally different and everyone I talk to from different schools has kind of said that too. Definitely a lot of FOMO.”

LaGue left her mark at RMU, and continues to make a name for herself in the hockey world after graduating. While her talent and hard work has been a key factor, she’s also grateful for her upbringing and her time at RMU for helping her reach where she is today.

“I’m super thankful for everything that people have done for me, especially at Robert Morris, that was a great support system for me, and I really couldn’t have done a lot of this without them and definitely friends and family play a big part in that too,” she remarked. “So just super thankful for where I’m at.”