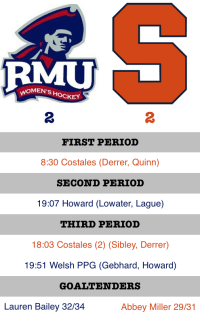 NEVILLE TWP — The Robert Morris women played in a game in which head coach Paul Colontino could only describe as a “roller coaster.” There were ups, downs and even a corkscrew in between, but at the end of the day, the Colonials walked away with a 2-2 tie against conference foe Syracuse at 84 Lumber Arena to move to 6-1-4 on the season and 2-0-1 in conference play.

What gave the game so many twists and turns was officiating and the number of penalties called. Between the two teams, 24 penalties were called for a total of 56 minutes. One ten-minute game misconduct was called on Syracuse, but aside from that, 46 of the 65 game minutes were spent with some type of special teams unit on the ice. Power plays turned into penalty kills and the Colonials scored their first goal during a four-on-four session and their final goal on a six-on \-four power play with an empty net.

“It was a tough game for the players to play in,” noted Colontino. “A lot of penalties and odd-man situations on both sides of the play. I felt for both teams in the sense that you saw a lot of confused faces on the ice. It was tough to get a feel for what is being called and what wasn’t.”

While the penalties were a bit excessive, and some could have resulted in the referee swallowing the whistle, Colontino is correct that it was at least called tight for both sides. The Colonials recorded 11 penalties in the game, while the Orange committed 13. The two teams did come into the game ranked first and second in the conference in penalties per game. However, for the Colonials, that meant 5.6 penalties per game and 6.4 for the Orange. Those numbers are clearly set to go up.

“You can’t make excuses, both teams dealt with it,” added Colontino. “At some point, the teams had to adjust themselves. We need to find a way not to take the penalties.”

Colontino’s players agreed, and junior forward Brittany Howard admitted that while playing physically is a good thing, the team needs to find that line between aggressive and over-aggressive without crossing it.

“I think it shows our [ability to overcome] adversity,” added Howard. “We want to work hard and take the body but we obviously need to play clean. We will go over some film tomorrow morning and try to get it fixed.”

While the Colonials were trying their hardest to stay out the box, they were unable to take advantage of the 13 times Syracuse was in the box. Robert Morris walked away 1-12 on the power play. For their season, they have converted 19 percent of their of their power play chances. Tonight, they walked away with an 8-percent success rate. However, Colontino chalked most of the struggles to the flow of the game and does not see this being a trend for the team tied for sixth in the country in power pay success.

“In a game like this, you have to throw percentages out the window,” he said. “A lot of times, the penalty killers are also on the PP; power play people are on the PK. Therefore, in this game, we have to focus less on the percentages, and more on literally executing. If we don’t capitalize on a 5-on-3, there might be another one 30 seconds from now.”

Syracuse scored with about two minutes to go in the game to take a 2-1 lead. However, the Colonials hung in tough, dealt with the adversity and tied the game with just nine seconds left in regulation. A group of bodies were flying in front of the net and sophomore defender Kirsten Welsh was able to find a loose puck and put it home to tie the game.

“They were whacking the puck at the net in the slot, there was just an excess of sticks in front,” recalled Welsh. “I don’t know, I just came across the slot and whacked at it, and it just went in.”

It marked the sixth goal of the season for Welsh, who is having a phenomenal year to date, and her second last-minute tally. She provided a late game-winner against Mercyhurst last weekend.

On Saturday, the Colonials finish off their two-game set with the Orange. It is safe to say that the notion in the locker room before the game will be to stay out of the box, and take advantage of more situations when the opposing team is in the box.

“If anything, our focus is on, let’s get a feel for what is within the rules and what is not and let’s play. With both teams playing hard there will be bumps and there will be collisions, but we have to stay on the right side of those. Tomorrow is a new day, there may be a new referee crew, so we just need to play our game.”