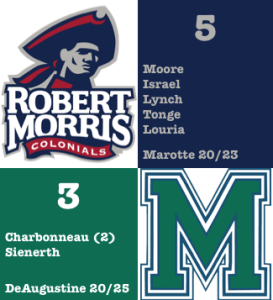 ERIE, Pa. — Robert Morris scored three power-play goals to beat Mercyhurst, 5-3 at Mercyhurst IceCenter on Sunday afternoon and sweep the Lakers in the final weekend of the first half of the 2017-18 season.

Trailing 1-0 after the first period, the Colonials were awarded a five-minute power play when Mercyhurst forward Wes Baker checked freshman defenseman Nick Jenny into the boards from behind.

Timmy Moore got the Colonials on the board with a slam dunk into an empty net after Alex Tonge pulled a loose puck out of a cluster of bodies in the slot and fired a cross-crease pass. The goal was Moore’s third of the season and second in as many nights. Brady Ferguson had the other assist.

Less than two minutes later, defenseman Eric Israel found the rebound of his own blocked shot, turned the puck over to his backhand and beat Lakers goaltender Colin DeAugustine on the short side for a goal that held up as the game winner.

Baker was also given a game misconduct for his hit on Jenny, who missed the rest of the second period, but returned for the third.

The teams then traded special teams goals in the third period. Luke Lynch scored a shorthanded tally on a 2-on-1 to give Robert Morris a 3-1 lead. Jonathan Charbonneau answered back with a power play goal on the same man advantage. Francis Marotte appeared to have been interfered with on the play, but it was upheld after video review.

Alex Tonge scored on a long wrister that went off DeAugustine and trickled across the line to give the Colonials a 4-2 lead, before Penguins Elite product and Erie native Bryan Sienerth scored on a power play to draw Mercyhurst back to a one-goal deficit.

Mike Louria finished the scoring with another power play goal to give the Colonials the final margin of victory.

Mercyhurst had started the scoring with a goal by Charbonneau in the first period. He took a cross-ice feed from Taylor Best on the rust, moved past defenseman Brett Beauvais and beat goaltender Marotte with a well-placed wrist shot.

“I thought that was a real turning point in the game for us. I thought the power play did a very good job for us the whole game in creating chances. Obviously, they scored two and completely changed the course of the game. We made some really good individual plays, some really nice, back-door plays, some nice passes and finished off our chances. I think it was one of those things where we got the momentum and rode it.” — Robert Morris head coach Derek Schooley on his team’s two-goal second period power play.

“We’ve been in these games a lot this year and haven’t found a way to get the job done. Mercyhurst, give them credit, they didn’t go away. We would score to make it 3-1, they would make it 3-2. We made it 4-2, they made it 4-3 and they just wouldn’t go away. Our resiliency was strong. Our belief. We’ve used the word a lot the last week about ‘believe.’ We believe that we’re a good hockey team, we just haven’t put it together yet.” — Schooley on his team finishing despite a back-and-forth third period.

“We definitely wanted to make them pay there and we got two and we’re thankful he’s OK,” — Tonge on the major power play.

“Just moving the puck and getting shots through. Timmy [Moore] creates a great presence in front and getting pucks to the net and crashing the net. Overall, we were just back to our old ways, moving the puck, moving our feet and it showed.” — Israel on what was clicking with the man advantage.