NEVILLE TWP., Pa. — The Robert Morris Colonials cashed in when the opportunity presented itself on Friday night at RMU Island Sports Center en route to an important 4-2 victory over the visiting Army West Point Black Knights. 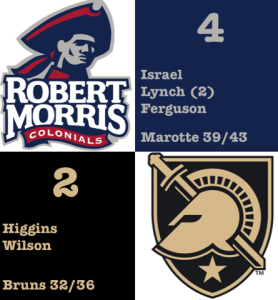 Paced by sophomore forward Luke Lynch’s two goals and a 39-save performance from starting goaltender Francis Marotte, the Colonials ran their record to 2-2-0 while putting together their most complete performance to date. The Colonials got off to a fast start, killed all five Black Knights power plays and answered every attempt by Army to climb back into the game.

The goal coming into the weekend was to simply play 60 minutes of focused, high-energy hockey. It was a task that the Black Knights did not make easy, as they threw 21 shots on the net in a furious third-period onslaught. The Colonials managed to thwart the Army attack with several key saves by Marotte and some attention to detail on the penalty kill.

STEP IN THE RIGHT DIRECTION

While the achievement of the goal of a complete, 60-minute game from the Colonials could be debated on Friday night, one thing was indisputable. The effort put forth was an improvement as evidenced not only with a quick start by virtue of a two goal, first period lead. But it was also displayed by the way that they kept Army from finding the tying goal at any stage of the contest.

“It’s certainly an improvement tonight, we played a good first period, we came out hard and scoring a couple of quick goals really got us energized,” Colonials forward Spencer Dorowicz said. “In the third they came out hard, and we did what we had to do but we’re not completely satisfied. We want to come out and play a better third period tomorrow and a full 60. But it’s definitely a step in the right direction so we’re happy with that.”

“We played with energy, we played with enthusiasm and our effort was good,” Schooley said. “In the second period, they responded after an off week and they got a little bit better. When you’re trailing 4-2, you’re going to push. It’s tough because you’ve got a two goal lead and you know they’re going to come. Did we handle it great? No, but I think we learned a little bit from the Canisius game when we were up 3-0 and they came back and tied us 3-3”

Army’s style of play doesn’t very often result in prime scoring chances, however the Colonials found just enough space or outworked their opponent hard enough to find prime scoring chances at various times and almost all of those found their way into the net and past starting Black Knights goaltender Cole Bruns.

Defenseman Eric Israel opened the scoring with a hard shot from the top of the slot after taking a brilliant feed from Michael Louria less than two minutes into the game, while leading scorer Brady Ferguson put the moves on Bruns during a second-period, short-handed breakaway that saw him score his third goal of the year.

Lynch’s two goals were contrasting in terms of style with a hard, well-placed shot that beat Bruns in the first frame, and a workmanlike rebound put back in the second period that added the final cushion of victory for the Colonials. Lynch now has four points in as many games, carrying over a strong second half performance from last season into the new year. His start to his season hasn’t gone unnoticed by Schooley, who knows the virtue of having multiple lines that can provide scoring.

“We need secondary scoring,” Schooley said. “We need guys that can score on all different lines. We need to get goals from everybody. You’ve got to have scoring depth and be more than a one line team and nothing would make me happier than if Luke can continue to score the way he has through four games.”

Saturday night’s game may very well look much like Friday night’s weekend opener, from an effort point of view. Army will most assuredly come out firing on all cylinders, having less rust to shake off than they did earlier as the enjoyed a weekend off last week. The Black Knights don’t appear to know the meaning of the concept of letting off the gas pedal and bring their hard-to-play-against game to seemingly every shift. The Colonials know they have their work cut out for them on Saturday night and are prepared for what they’ll have to face in their opponent

“They’re a tough team to play against,” Dorowicz said. “I think what we just have to do is stick to our strengths and that’s our speed and I think if we can do that and get to our fore check hard they can’t contain us. We just want to come out flying again tomorrow.”

Even though the effort was better for the Colonials on Friday night, there are still things to tighten up coming into Saturday’s game, including some miscommunication between goaltender and defense in the third period.

“I kind of caused those turnovers,” Marotte said. “I misplayed the pucks a couple times, but it’s a team game. We played really well even though we gave up a lot of shots in the third period. I felt really good at the end other than playing the puck there but that’s a small adjustment that we need to make.”