Daniel Leavens had two goals in the quarterfinals against Holy Cross. -- BRIAN MITCHELL 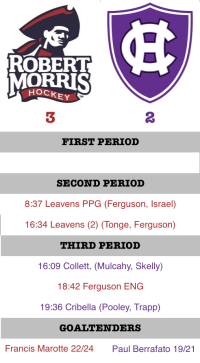 NEVILLE TWP, Pa. — For the fourth year in a row, the Robert Morris Colonials will make the trek to Rochester, N.Y. to participate in the Atlantic Hockey semifinals, as they closed out the Holy Cross Crusaders with a 3-2 win on Saturday in Game 2 of their best-of-three series.

Robert Morris used two goals from senior Daniel Leavens and a penalty kill that was perfect, including a staggering five consecutive kills in the early part of the game that was a vital component of the series clinching win.

In between the pipes, Francis Marotte turned in yet another solid performance, turning away 22 of 24 Crusader shots for his second consecutive playoff victory. His save total might seem rather low, but the timeliness of them was spot on as he, combined with a stout Colonial defense kept the Crusaders from sniffing any sort of momentum for nearly 60 minutes of hockey.

“We did a good job pushing from the top down and keeping them out of the middle,” Colonials head coach Derek Schooley said. “They started looking for high re-directs in the slot and we kind of adjusted to that. I thought our penalty killers did an outstanding job. We spent our whole first period killing penalties and the shots were still 9-for-9, that shows how we played. We gave up 24 shots and 11 of them were on the power play so it shows what a good job our penalty killers did tonight.”

IN SEARCH OF LEVEL ICE

The Colonials came into the evening expecting the Crusaders to push the pace in desperate search for the game’s first goal. They would have liked more even strength play though as they were whistled for four first period penalties, and while that kept their offensive attack at a minimum, the kills seemed to give them a progressive lift in energy in the early portion of the game, making the job for Holy Cross that much more difficult.

The names are familiar — Spencer Dorowicz, Rob Mann, Daniel Mantenuto, Alex Bontje and Timmy Moore — and they were at their very best when it came their turn on the penalty kill. They kept the Crusaders power play to the outside and relatively harmlessly, even during a critical major penalty assessed to Luke Lynch towards the end of the first period.

“It happens, it’s playoffs,” Leavens said. “We were a little too excited in the first period and we had a few too many penalties but credit to our penalty kill. We all worked really hard and that includes Franky, he had some big saves and we had a couple of big blocks, we really just worked hard there.”

Following the kills, the Colonials exercised their game plan and were a clearly better team at even strength as they played hard, smart, and opportunistic. The Crusaders did not make the most of their five chances, but the Colonials would open the scoring on just their second power play of the game when Leavens put a hard shot past Holy Cross netminder Paul Berrafato at 8:37 of the second frame.

“All year, the second period has been the one that we’ve struggled in,” Colonials defenseman Eric Israel said. “We just stayed positive, saying that it’s going to come. In five on five hockey we outworked them and out chanced them big time, we just needed to stay out of the box and we did that and we capitalized.”

Leavens the added an insurance goal at 16:34 when he took a brilliant pass from Alex Tonge and pushed it home for his 14th goal of the season. The third period saw the Crusaders completely neutralized as they managed just seven shots despite their season hanging in the balance and trailing by two with twenty minutes to go.

The Crusaders managed a late goal when Mitch Collett pushed a puck in to the corner of the net at 16:09, but Brady Ferguson would answer with an empty net tally in an effort that saw him out-maneuver two Holy Cross defenders to put the Colonials back in the drivers seat in the waning moments. Holy Cross added a late goal with the extra attacker with just 23.3 seconds left, but it did little more than put off their final loss of the season as they could not find the net again.

The victory sends the Colonials to the Atlantic Hockey semifinals for the fourth time in four years, a unique distinction in the conference, and an outcome that not many saw coming in the early preseason polls.

“Unbeliveable,” Schooley said. “We’ve been four straight years now and no other program has been there that many times in these past four years. And to do it with this group is very special. This is a group that no one expected to be here. We were picked sixth and everybody thought we were going to be a team that was rebuilding. We never wanted to take a step back. Our seniors wouldn’t allow it, our chemistry has been outstanding and our leaders have done a great job. It’s a joy to coach and I’m just happy to keep coaching games with this team. This is one of those seasons, and you don’t have many of them, that you don’t want it to end. It’s unfortunate that it will, and we’ll have to say goodbye to four really good people. They got us to Rochester and hopefully we get to play a lot longer with this group.”

It’s been a special season for RMU, and it’s one that the team believes could be very well on going for perhaps longer than one or two more games in Rochester next weekend, which was one of the goals that the team laid out before the season started. Indeed, the job is not yet complete as Leavens explained.

“In preseason we saw the polls and to be honest, it pissed us off,” he said. “Obviously, we understand what we lost and we lost some great players, but to be picked sixth after being back to back regular season champs was a bit of a shot in the teeth. We used that as motivation, and by no means is our job done here. Our team’s goal is not to get to Rochester, it’s one of our goals but not the end goal we look towards, but this is definitely a good feeling. We have some unfinished business to do in Rochester, we’re going there for one reason and one reason only, to win.”