NEVILLE TWP., Pa. — The Robert Morris Colonials defeated the St. Lawrence Saints in overtime by a score of 3-2 on Saturday afternoon- a mere 18 hours after the Saints left Colonials Arena with a 2-0 victory.

It was reminiscent of groundhog day at the Island Sports Center on Saturday. The Colonials outplayed the St. Lawrence Saints, a team that placed two goals behind starter Lauren Bailey by the time the second intermission began. This time, the resilient squad was able to overcome two well placed Saints goals by Justine Reyes to capitalize on a Kirsten Welsh point shot with 3:09 remaining in the extra period.

Reyes opened up the scoring in the second period, elevating a puck over the blocker of Bailey at 2:20. The Colonials quickly regrouped and a pair of first-years teamed up to forge a tie only :34 later, as Gillian Thompson fired a shot from the right point that met Mackenzie Krasowski’s stick and beat St. Lawrence starting netminder Sonjia Shelly.

Reyes scored her second on the contest, a reviewed deflection to the right of Bailey just under four minutes later, and the Colonials searched for a way to beat the senior Shelly.

Emily Curlett answered the call, ringing a shot off of the post and behind the Saints goalkeeper to tie it at two.

A scoreless third led to extra time, where Robert Morris seemed to have all of the momentum in their favor, and a pass from Bailey found a wide-open Jaycee Gebhard, who skated into the offensive zone and dropped to Welsh. Welsh fired a laser through traffic to earn the split on the weekend.

“That would not have been a goal or even a shot without all the hard work of the other forwards,” Welsh explained. 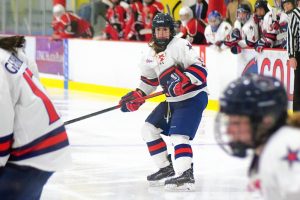 The 2018-19 Colonials are in a youth movement on the back-end, as the top six currently employs two first-years, two sophomores, a converted junior and only two seniors. One of the four original defenders returning to the squad for the campaign, Emily Curlett, had a game to remember.

“She stepped it up huge,” head coach Paul Colontino said. “She had a pretty good game yesterday. For the full 63 minutes she was just steady makings some great plays, poised plays, battling when she had to and shooting and scoring when she had the opportunity.”

The sophomore, who hold the teams record season goal-scoring record as a rookie was lights out following a scary hit in the first period, and including the laser beam goal, was instrumental in keeping pressure on the Saints defenders in the offensive zone. A deep cycle in the first was continued as Curlett- along the blue line- left her skates, leapt over a forward, batted a clearing pass down to herself and proceeded to pass it behind the net.

The Colonials have had their share of overtime games in the past two-plus seasons, and since a 4-3 loss at Merrimack on October 21, 2016, haven’t lost in the extra period. That includes wins over Mercyhurst and a tie over perennial powerhouse and future National Champions Clarkson.

Krasowski’s goal in the second period was her first official NCAA goal, and the first point for Thompson…  With her 29th tally, Welsh moves out of a tie with 08’s Megan Picinic and Morgan Beikirch for sole posession of 10th on the teams all-time goal scoring leaders…. The win was Baileys first since October 8th, 2017.

It doesn’t get any easier for the Colonials as they head to Potsdam, N.Y. on Friday to start a two game set against the two-time defending National Champions and number-one ranked Clarkson Golden Knights.

“We’re now moving into another weekend where we’re playing the number-one ranked team in the nation,” Colontino explained. “We’ll keep trying to make improvements, that steady little incline. We go into the weekend with nothing to lose- they’re the number one team, still the two-time defending National Champions. It should be a great test.”

Clarkson added goaltender Kassidy Sauve as a graduate transfer, Suave led the Ohio State Buckeyes to a 3-1 record over the Colonials last season.