Conference play opens this weekend for the Robert Morris Colonials as they play host to the Army Black Knights and their relentless and physical brand of hockey. It will be another stout early season test for the Colonials, who look to find more consistency to their game and battle level following an up and down opening weekend of play against the Bowling Green Falcons. On Friday night, the Colonials were impressive, matching the Falcons stride for stride in an intense battle that saw them come out on top by a 3-2 final score.

“If you would have told me going into the weekend that we would have split with the 20th ranked team in the nation, you’d probably be happy with that result,” Colonial head coach Derek Schooley said. “But we’re not too happy with the way that it went down. I thought our effort on Friday night was outstanding. We played physical, we played big, our compete level was high and we got some timely goals.”

And on Sunday afternoon, it was a different looking hockey team altogether as the Colonials took a 6-0 loss. It was a performance that showed the team not meeting the expectation level from an intensity standpoint.

“It was a completely opposite feeling on Sunday,” Schooley continued.  “We didn’t know what hit us. We didn’t play at the compete level we had been playing and practicing with. It wasn’t a good effort or result.  We weren’t close to the standard or the expectation that we set for ourselves as a program.  We need to get back to being consistent. It’s one weekend but we have to make sure we show up for both nights. We’re not going to win em’ all but we’d better show up for them all.”

Having only three games, including one preseason game in the books thus far, this much is clear for the Colonials. Michael Louria, Nick Prkusic and Alex Tonge have picked up right where they left off last March, and freshman Justin Addamo is doing his part, contributing to the early season scoring mix as well. All four forwards have figured in on the early goals thus far and lead the Colonial offensive attack heading into the weekend.

While his early season stats might not reflect it, junior net minder Francis Marotte has looked impressive in the early going once again after nearly half a period of shutout hockey versus Brock in preseason action followed by a 37 save performance in Friday night’s win versus Bowling Green. Marotte allowed six goals on Sunday, but still made tough saves in a game where his side was not at it’s best.

“Our goaltender in a 6-0 loss was our best player,” Schooley said. “We hung him out to dry and didn’t give him much help.” 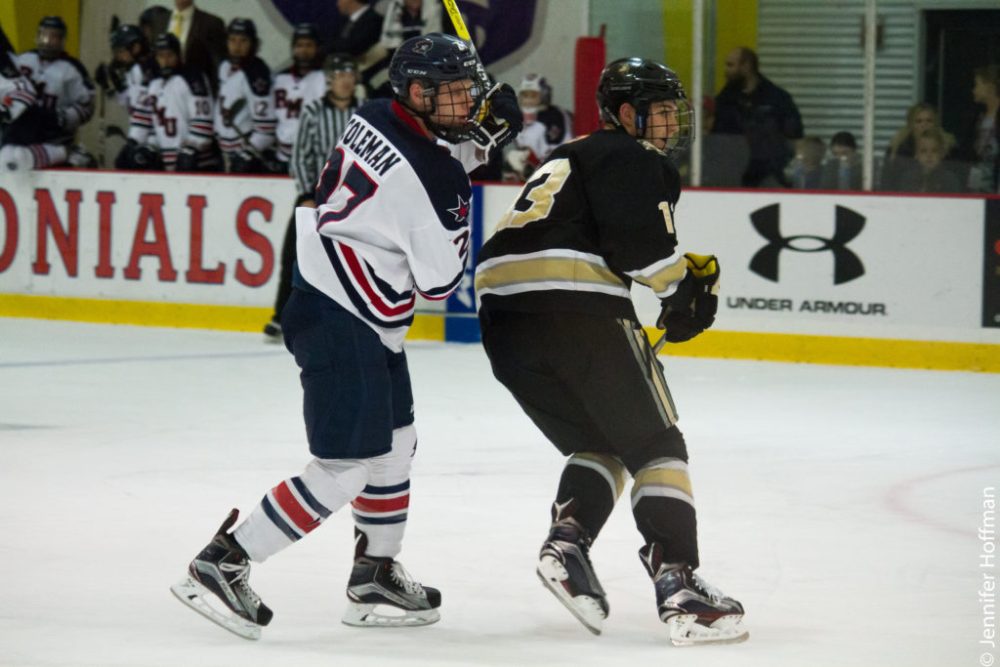 The Black Knights enter the weekend having completed three non conference games with losses coming at the hands of Union and Connecticut and the lone win coming against Merrimack last Saturday night. Thus far the scoring has been coming from the back line as defensemen Alex Wilkinson and Daulton MacAfee lead the way with four points each.  One player that cannot be overlooked is speedy forward Dominic Franco who put up 30 points last season and has been a quiet soul in the first three games for Army, but could break out at any moment.

It has been a program that has battled with the Colonials tooth and nail over the years including some fierce, hard fought playoff battles over the years.  Expect this year’s version of the Black Knights to bring intensity on every shift and also for them to take advantage of opportunities when they present themselves while they look to keep the Colonials bottled up and as frustrated as possible over the weekend.

“Anytime you play a military academy you know they’re going to give you everything that they have, that’s in their DNA,” Schooley remarked. “You have to know that you’re going to get that. But with that being said, we’ve got just as high a compete level as they do. We need to set the tone of how we want to play and see if they can match how we want to play. We need to do everything that makes us successful. We realize that it’s going to be a physical game, but it’s not going to be a ‘stupid’ physical game.  There’s a lot of respect from our program to their program on how hard they play and I hope that goes both ways. These are going to be hotly contested hockey games and we’d better be ready to play.”