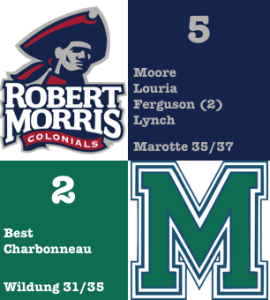 NEVILLE TWP, Pa. — It’s hard to believe that belief can come out of a loss; that moments that can turn the tide of a season that had not gone as expected can be found on the road after a hotly contested defeat at a rival opponent.

But in their 7-4 loss at Penn State last Saturday night, the Robert Morris Colonials started believing that the end to their recent losing streak was in sight. Their belief turned out to be complete truth, not only with the way they played, but also in the result on Saturday night at RMU Island Sports Center, where they turned in perhaps their best performance of the season in a 5-2 victory against the visiting Mercyhurst Lakers.

“I thought we took a big step last Saturday versus Penn State even though we didn’t get the result we wanted,” Colonials head coach Derek Schooley said.  “I thought we took another big step today in the belief in our team from our guys. I really liked our game for 54 of 60 minutes. You’re going to have ups and downs, we had a six minute lull after they scored and the game got a little sloppy for us. And for a game that we were playing so well, we allowed it to get sloppy but we kept the belief and we believed that we were going to get rewarded for our effort. We put a great effort in tonight.”

Getting all wheels pulling in the same direction and every player playing to their ability at the same time had been on the agenda in recent weeks, but had been an elusive task to this point for the Colonials.

However, from the drop of the puck Saturday, seemingly every player on the roster found themselves performing at the level they had come to expect. Following some punishing hits delivered from defenders Eric Israel and captain Alex Bontje, the Colonials set out to do what they do best: outwork their opponent and let their talent take over.

That was the case 7:47 into the first period when Israel found a loose puck and also a streaking Brady Ferguson down the left wing boards. Israel’s pass connected, springing an instant two-on-one that saw Ferguson apply the breaks and make a perfectly timed pass to linemate Timmy Moore, who beat Lakers goaltender Brandon Wildung to give the Colonials a 1-0 lead.

The Colonials’ best players turned in their best performances of the season on the same night, as Ferguson managed a four-point night, Moore added three points himself and Israel was a plus-3 for the game.

“For Ferguson to get two and to start scoring five on five and to get four points was a really good game for him,” Schooley said. “But he did things away from the puck, blocked a big shot and was good on the penalty kill. I think we were good from the top to the bottom. Timmy Moore was pretty good on the wall and playing with energy. We had a lot of good players tonight and we had a really good goaltender. Everybody competed and did the job they needed to do.”

For Israel, it was a game that fans had grown accustomed to seeing from him last season and at different points this season and at a different level it seemed on this night.

“He was doing things offensively and making sure he was reliable defensively while joining the play as well,” Schooley remarked. “Eric’s a good two way guy and logs a lot of minutes for us but he needs to take care of his own end first and then join the offense and he did a great job of balancing the two tonight.”

RESILIENCY AT THE FOREFRONT

Following a rebound goal from Michael Louria, the Lakers took advantage of two opportunities as Taylor Best and Jonathan Charbonneau managed a goal apiece to tie the game with Charbonneau’s goal coming at 13:16 of the second period, putting the Colonials in a situation that could go either way. But, they were able to shake off the situation and move forward, garnering the majority of the shots and scoring chances for the rest of the period while never giving up the go ahead goal. The Colonials didn’t blink, nor did they change what made them successfull in the early portion of the game and it paid dividends in the third period.

Coming into the third frame, the game had a striking resemblance to other games this season where the Colonials had played well enough to win, but failed to achieve the results by not capitalizing on opportunities to seize momentum for good. They earned their results in the final twenty minutes with two goals from Ferguson, key penalty kills with seemingly every man dressed committed to blocking shots, and some key saves from goaltender Francis Marotte.

Luke Lynch managed to find the empty net with 4:20 left to go while working a penalty kill at a critical moment of the game, while Ferguson provided the game winner and first insurance marker.

What it takes to win, starts with belief and not just with the coach, but with the players in the locker room, and according to Israel, that belief springs from knowing what the potential of the team is going forward based on what it achieved last season.

“We basically brought back the same team from last year and we all knew what happened last year wasn’t a fluke,” Israel said. “We have a great hockey team in our locker room and we just have to start believing and we showed it tonight and on the scoreboard too.”

The Colonials and Lakers will finish their home-and-home series at Mercyhurst on Saturday at 4 p.m.