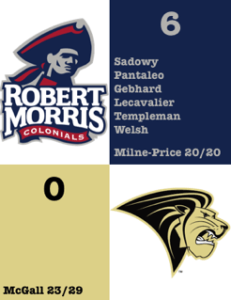 Robert Morris defeated College Hockey America foe Lindenwood, 6-0, on Friday night in Wentzville, Missouri after receiving a strong showing from an area of the lineup that has been dormant this season thus far — the second line.

Head coach Paul Colontino has used quite a few players this year alongside seniors Jessica Gazzola and Amanda Pantaleo in an attempt to replace graduated forward Maeve Garvey. Those have included junior Amber Rennie, sophomore Sarah Lecavalier and first-year Lexi Templeman. While the results have remained the same defensively, it was on Friday that things finally became offensive-minded.

Lecavalier, a North Dakota transfer, took her turn on the right side Friday and netted a goal, Pantaleo scored her second of the season and Gazzola collected three assists.

Gazzola, the senior from Thunder Bay, Ontario explained that changing linemates, although commonplace throughout hockey, can be solved with simplicity.

“We just wanted to make sure we did the little things right,” Gazzola said. “We kept working hard and working off each other.”

Beyond the second line, Caitlyn Sadowy netted her second career goal and the game winner on a rebound at 1:01 of the second period. Pantaleo followed 16 minutes later on the rebound of a Gazzola shot and the Colonials added on with goals from Jaycee Gebhard, Lecavalier, Templeman and Kirsten Welsh.

Gebhard was involved in a collision in the third period. She skated to the locker room under her own power but did not return to the game. Colontino gave an update on the reigning CHA Rookie of the Year after the game.

“She looks pretty good,” Colontino said. “The way the game went, it was in our best interest. No need to get her back out there. She’s a little banged up but everything looks solid.”

Welsh passed 2017 graduate Mikaela Lowater as the team’s career points leader amongst defenders with her goal late in the third period. Welsh, a native of Blackstock, Ontario, has goals in the past three games and is coming off a four-assist game in the team’s 11-0 win over Brown on Oct. 20.

Elijah Milne-Price started her third consecutive game in goal and moved her record to 5-0-2 on the season. The senior from Mississauga, Ontario earned her second shutout on the season and has a 1.00 goals-against average and a .944 save percentage. … The Colonials went 3-for-6 on the powerplay. … Gazzola finished the night 15-of-20 in the faceoff circle.

END OF THE ROAD

Robert Morris concludes its season-opening, ten-game road trip tomorrow at 1 p.m. at Lindenwood. The Colonials return to the RMU Island Sports Center on Nov. 10 against RIT.