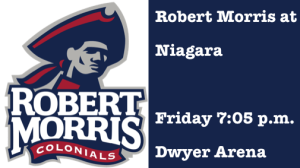 For the first time in the history of the rivalry between the Robert Morris Colonials and Niagara Purple Eagles, there will be a new coach behind one of the benches.

Pittsburgh native and North Allegheny grad Jason Lammers will be introduced to his first Atlantic Hockey game as a head coach this Friday night and it’ll be his first game versus the Colonials as they drop the puck on their regular-season campaigns.

There will be much to be fine tuned of course as the early portion of the season gets underway. But for Robert Morris and head coach Derek Schooley, there is a lot to look forward to as a talented, veteran group returns very much intact and coming off a season that saw them win 22 games and come within a goal of making their second NCAA tournament appearance.

“We have to work on our overall game,” Schooley said.  “We’re in preseason form, and we just need to keep getting better every week. I thought we had a few too many turnovers for my liking in our preseason game, and that’s to be expected when you’re coming back from summer hockey.”

In the Colonials 5-1 preseason victory over Ottawa, they showed off several of their offseason additions. The amount of seasoned veterans returning, coupled with the promising new blood, makes this a season where great things could very well be possible.

“Obviously we’ve got an old team,” Schooley said. “We’ve got 14 returning forwards and seven defensemen with college experience. With our freshmen, it’s going to be a learning process and they’ve got to catch up to everybody else that’s on the roster. With those guys, you’ve seen the depth of our hockey team right now. We aren’t counting on them to lead us to the promised land. We’re counting on them to feel their way through the process and like our hockey team, get better every week so when they do play, they’ll be able to contribute to our hockey team.”

It’s not so much about the number of returners, it’s about the quality. Leading scorer Brady Ferguson took just 14 seconds to make his presence felt during Saturday’s preseason game, and could very well challenge for a national scoring title this season. Junior forward Alex Tonge took his game to another level last year, joining the ranks of the 20-goal scorers while junior defenseman Eric Israel became a household name throughout the conference. The performance of sophomore netminder Francis Marotte was truly something to behold, with a 2.28 GAA in his freshman campaign.

Perhaps more than impressive numbers, they also turned in an amazing performance from a leadership perspective, guiding along a rather large number of first-year players into the fold. Captain Rob Mann and other departed seniors that were part of the leadership group will have to be replaced this year. It’s something that Schooley expects to come as a natural progression.

“Mann was such a good captain and played his role,” Schooley said. “He commanded respect because of who he is as a person. It’s going to be hard to replace him in his leadership capabilities with just one person. We have some very good leaders with Timmy Moore and Brady Ferguson being the alternate captains and Alex Bontje being the captain, but you need all your older guys to step up. You need guys that have been captains in junior hockey and guys that have been around the program a long time. And you will have those people step up and take leadership roles as the season goes on.”

Niagara is coming off the worst year in program history, netting just three wins and winding up with a vacancy in the head coach’s office. The history of games between the Colonials and Eagles have produced an entertaining brand of hockey over the years. Games that tended to feature lots of lead changes, nonstop flow and lots of scoring. The nature and identity of the Eagles remains to be seen.

“It’s a new coach and they’ve got to completely install new systems and whatever changes they would have made and what personnel they want, so I imagine they’ll be better than they were on video. They might have some different faces in the lineup. We’re really going to have to adjust on the fly and be prepared for what they did against Colgate and we’ll have to be ready to make changes as the game progresses.”

Last season, the Eagles were led up front by Stanislav Dzakhov, Kyle Spriggs and Johnny Curran, who all posted point totals just under the 20-point bar. They all return, as do goaltenders Guillaume Therien and Joe O’Brien. Freshman Brian Wilson took the opening week loss in net for the Eagles.

Since they will be opening their home slate with a new head coach, following an opening week loss, there won’t be much doubt about how much effort the Eagles will put into trying to win this game.  But try as they will, it probably won’t be enough to stave off a deeper and more talented Colonial side. This one may stay close for a bit, but the Colonials find a way to push the pace and dictate the play in a 5-2 victory.