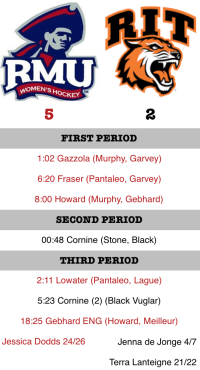 NEVILLE TWP, Pa. — It’s one thing to get off to a good start. It’s another thing to manage the game and the score for a full 60 minutes. On Saturday afternoon, the Robert Morris did some of both as they took a commanding three-goal lead in the first 10 minutes and turned aside the RIT Tigers for the remainder of the game to earn a 5-2 victory and a weekend sweep at 84 Lumber Arena. The win gave the 8th ranked Colonials sole possession of the lead in the College Hockey America standings for yet another weekend and clinched a bye into the semifinals of the CHA Tournament.

“That was the toughest part throughout the whole game was the fact that we got up and got a 3-0 lead so early,” Colonials head coach Paul Colontino said. “We knew the type of intensity that RIT was going to come out with to battle back. We took some penalties in the third, which opened up the window for them, but we had some great kills which created a little bit of momentum for us. It was up and down game after those first 10 minutes and it was a lot closer than the scoreboard said. You forget that you’re playing another team that wants to win as well and they came back with some huge shifts.”

Colontino credited his team’s leadership for keeping a sense of urgency throughout the contest despite the lopsided early score.

“After the second period, just knowing what kind of third period it was going to be, we knew we would need some whistles and some rebound control,” he said. “[Goaltender Jessica Dodds] was money. She was great in the third period. She got whistles when we needed it and slowed the play down. It’s great having somebody that’s confident and comfortable in net that relaxes everybody else in front of her. We know if a shot gets through, she’s got it.”

Dodds does indeed have it. She was cool, calm and collected after the Colonials knew they’d be facing the onslaught of RIT energy for 50 minutes of action. The London, Ontario native stopped 24 of 26 shots in the win, her 11th of the campaign. Her strong play included a series of two-on-one challenges in the second period that could have potentially turned the balance of the momentum.

“I just had to stay with it and make sure that I kept my head up,” Dodds said. “We knew there were going to be ups and downs and that game was kind of a roller coaster. We had a really good first period, they brought it back in the second and we knew that the third period was do or die. We had a 3-1 win going into the third but we knew we had to be strong. Our goal was just to win the third period. We win that and we win the game.”

HOT OUT OF THE GATE

The scoring onslaught for the Colonials came from three different scores in the first 10 minutes. Jessica Gazzola got Robert Morris off and running just over a minute into the game when she let go a wrister from the left circle that seemed to fool starting Tigers goaltender Jenna de Jonge. She was followed by defenseman Natalie Fraser, who put home a rebound in the slot just over five minutes later. Then, leading scorer Brittany Howard scored her team-leading 18th goal of the season at the 8:00 minute mark which chased de Jonge from the RIT net. Colonial forward Maeve Garvey assisted on two of the early goals and was a large part of the early start.

“We thought we started a little bit slow yesterday,” Garvey said. “So we decided today that we needed to come out flying out of the gate and obviously to get a few quick goals was huge and it really helped us with momentum. We just wanted to play to our strengths, you don’t settle for how they’re playing. We really liked how we started in the first period, and we just wanted to make sure we were playing our style of game and not changing how we were playing.”

HOLDING ON TO A RESULT

The Tigers proved to be a resilient bunch on Saturday afternoon and managed to turn the energy around for good stretches of the final two periods sparked by the insertion of goaltender Terra Lanteigne who stopped 21 of the 23 shots she faced, and two goals from leading scorer Kendall Cornine who brought the Tigers back to within two goals with her breakaway goal 5:23 of the third.

But for all the desire the Tigers brought to climb back into the contest, it wasn’t enough to get the job done during a critical stretch of the final frame that saw the Colonials head to the box three times. The Colonial penalty kill and a sharp performance from Dodds kept Robert Morris in the drivers seat until a Jaycee Gebhard empty net goal closed out the scoring, and the Tigers’ chances of coming away with any points.

“The defense came up huge,” Dodds said.” We had three penalties in the third alone and we had to make sure that our PK was on point and they were. ”

The Colonials close out their home schedule next weekend against Penn State at 84 Lumber Arena.