Natalie Marcuzzi had a goal in the victory over Syracuse Friday. -- BRIAN MITCHELL 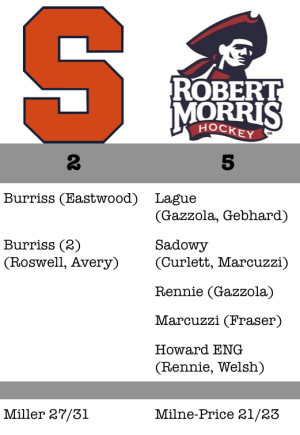 NEVILLE TWP, Pa. — One of the biggest expected strengths for Robert Morris coming into the 2017-18 season was their depth. They returned many impactful players both up front and on the blue line, returned two goaltenders with NCAA experience and brought in some exciting new talent in their recruits.

This has allowed them to roll four lines and three defensive pairs, while maintaining their fast-paced style of play so far this season. The defense often jumps into the play and contributes offensively. The forwards are committed to playing in both zones to cover for this aggressive play by the defense.

Friday, that depth aggressive offensive play by the defenders helped Robert Morris prevail, 5-2, in a matchup with the Syracuse Orange.

The Colonials received goals from Maggie LaGue, Caitlyn Sadowy and Natalie Marcuzzi, their first, second and second goals of the season respectively. Their top players came to play as well, as Amber Rennie scored her 11th, while leading scorer Brittany Howard scored an empty-netter, her 18th goal to finish things off.

The Orange were playing a bit short-handed, with only five defenders in the lineup. The Colonials wound up using it to their advantage as they continued to push the pace as the game went on after a relatively even first period. Both teams were playing in their first action in 2018 and there was a lot of back and forth play while the teams totaled 14 shots.

In the second, the Colonials came out firing, scoring two goals in the first three minutes. LaGue cashed in on a rebound after some good play down low by Jessica Gazzola and Jaycee Gebhard just 1:36 in. The Colonials followed that up with a rush into the zone by Marcuzzi, who dropped the puck off to rookie defender Emily Curlett, who had jumped into the play. Curlett fired a hard low shot that hit the pads of Syracuse goalie Abbey Miller and bounced right to Sadowy, who put it in.

Syracuse answered with a breakaway goal by Alysha Burriss that came on a two-on-none rush. The Colonials answered back with just over a minute to go in the period, when Gazzola led a rush into the zone and got the puck over to Rennie who fired it into the net.

In the third, the teams traded two quick goals. The Colonials’ came as a result of some hard work by  Marcuzzi and Aneta Ledlova and RMU up 4-1 at the time. The Orange answered under a minute later with another goal by Burris.

The period progressed with some chances for either team, but strong play from each netminder. Howard finished things off with an empty net goal with two minutes remaining. It was her 18th of the season, which ranks fourth nationally.

Miller finished with 27 saves for the Orange, while Milne-Price had 21 in what would become her 11th win of the season for RMU.