Colin DeAugustine made 78 saves in the last weekend of the first half. -- BRIAN MITCHELL 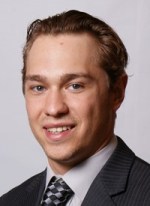 Burgettstown native Colin DeAugustine stopped 78 of 83 shots for Mercyhurst this past weekend, going 1-0-1 in a home-and-home with Robert Morris.

DeAugustine started his freshman season planted firmly behind junior Brandon Wildung in the net for the Lakers, but once DeAugustine was given a chance to show his stuff, he hasn’t looked back.

The former Penguins Elite netminder started the last five games of the first half and has played in nine games in total,  going 4-3-1 with a .921 save percentage. He was selected as the Atlantic Hockey Conference Goaltender of the Week for the final weekend of the first half.

Here’s whats going on in the rest of the hockey world.

Former Robert Morris forward Zac Lynch was recalled to the American Hockey League by the Springfield Thunderbirds, the franchise that he debuted professionally with last season. In 11 games with ECHL Manchester, he recorded 10 points, leading to his call up. He has played in one AHL so far this season.

The South Carolina Stingrays have been a popular team for players from the greater Pittsburgh area to continue their professional careers. This week Patrick Gaul (two goals and two assists), Dylan Margonari (two goals), and goaltender Patrick Milner (2-1) continued that tradition.

The Florida Everblades are the only team to rival the Stingrays in that regard, with Adam Brace (two goals) and a win by Matt Skoff adding to the team’s long list of accomplishments. … Elsewhere, Cody Wydo continued his recent production, adding two goals and two assists for Wheeling.

The Amarillo Bulls have been one of the junior teams of choice for talent coming from western Pennsylvania. Eric Cooley and Luke Edgerton each scored a goal and added two assists, an Brendan Walkom scored a goal.