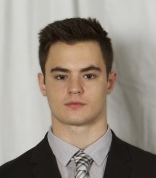 Amarillo Bulls forward Luke Edgerton turned in a five-point performance on Jan. 6 against Odessa, scoring two goals and adding three assist to lead the Bulls to a 5-2 victory. Edgerton also added an assist the following day to give him six points on the weekend.

The offensive outburst was something of an unexpected one, as Edgerton, a Wheeling, W.Va. native and former Wheeling Catholic and Penguins Elite forward, had just four goals and four assists on the season coming into the weekend.

He was named an honorable mention for the South Division star of the week for his performance.

Here’s what is going on elsewhere in the hockey world.

Florida winger Vince Trocheck had one assist in three games and was named to the NHL All-Star team for the first time in his career.

Anaheim goaltender John Gibson went 2-1 for the week, including a 23-save shutout of Detroit on Jan. 4. In total, the 23-year-old netminder stopped 78 of 82 shots for a .951 save percentage.

J.T. Miller had four assists and was a plus-4 in three games for the New York Rangers, who went 2-1 with wins over divisional foes Philadelphia and Columbus. … Dallas defenseman Stephen Johns returned to action Jan. 4 after missing two weeks with a lower-body injury.

Defenseman Mike Weber had an assist in three games for the Iowa Wild last week. The 10th-year pro has just four points on the season, but is third on the Wild in games played. Weber leads the team with 60 penalty minutes and has two fighting majors.

According to the Providence Journal, P-Bruins defenseman Matt Bartkowski is out with an undisclosed injury. He last played on Dec. 30. … San Diego defenseman Nate Guenin scored his second goal of the season in the Gulls’ 5-4 loss to San Antonio Jan. 6.

South Carolina goaltender Parker Milner, last week’s Headwaters Player of the Week, continued his hot streak, winning three more starts. Milner has now won six straight starts and 10 of his last 11. He earned his first shutout of the season with a 20-save performance against Greenville Jan. 6.

Former Robert Morris forward David Friedmann was traded from the Fort Wayne Komets to the Wichita Thunder. Friedmann had seven goals and six assists in 27 games with the Komets this season. He recorded an assist in his first game with his new team Jan. 6.

You could say Jeff Jones is getting settled in with Peoria. Jones, a 2015 Robert Morris grad, scored two goals including the game-winner in the Rivermen’s 5-2 win over Mississippi Jan. 6. In seven games since coming over from the Huntsville Havoc in December, Jones has three goals and three assists and is a plus-7.

John Rey continued the hot start to his pro career, scoring his second goal in four games and the game-winner in Knoxville’s 7-2 win over Evansville Jan. 7. … Fayetteville’s Joe Harcharik scored his sixth goal of the season Jan. 6 against Roanoke.

Former Robert Morris defenseman Andrew Blazek tallied a goal and an assist for Aalborg in a 5-2 win over Herlev Jan. 6 in the Danish Metal Ligaen.

Former Colonials forward Matt Cope scored a power-play goal for HK Nitra in the Slovak Extralegal. … Another Robert Morris alum, Cody Cartier, had an assist for Manchester of the EIHL.

Ohio State forward Luke Stork (Upper St. Clair) scored a goal and an assist as the Buckeyes knocked off No. 2 Penn State on Jan. 6.

Yale forward Andrew Gaus (Wexford) scored his first foal of the season against Northeastern on Jan. 3.

Former Penguins Elite forward William Casey had two goals and an assist in three games for the Soo Eagles of the NOJHL. Casey now has 33 points in 39 games, good for a tie for fourth on the team in his first junior season.

Shawn Baird (North Allegheny) contributed just a fighting major to the scoresheet in the Cornwall Colts’ two wins last weekend, but the team has been on a roll, winning seven straight games. The Colts are now in second place in the CCHL’s Robinson Division.

South Fayette’s Jordan Timmons had a a goal and two assists for the Cedar Rapids RoughRiders over two games. His goal came in a 5-4 shootout win over Waterloo Jan. 7. Timmons also scored the shootout-winning goal in that game.

In Amarilllo, Brendan Walkom (Moon) took a feed from Edgerton for the game-winning goal for the Bulls against Odessa on Jan. 6.