Former Robert Morris forward Matt Cope joined HK Nitra of the Slovak Extraliga in the first week of December and in just 29 games has registered 12 goals and 11 assists for the squad in just 29 games. In the past week, the forward from Lakewood, Colorado put up three goals and two assists.

During his career at Robert Morris, the rugged winger put up 28 goals and 50 assists in 147 games.

HK Nitra begins their Extraliga postseason push against Poprad this week in a seven-game series. 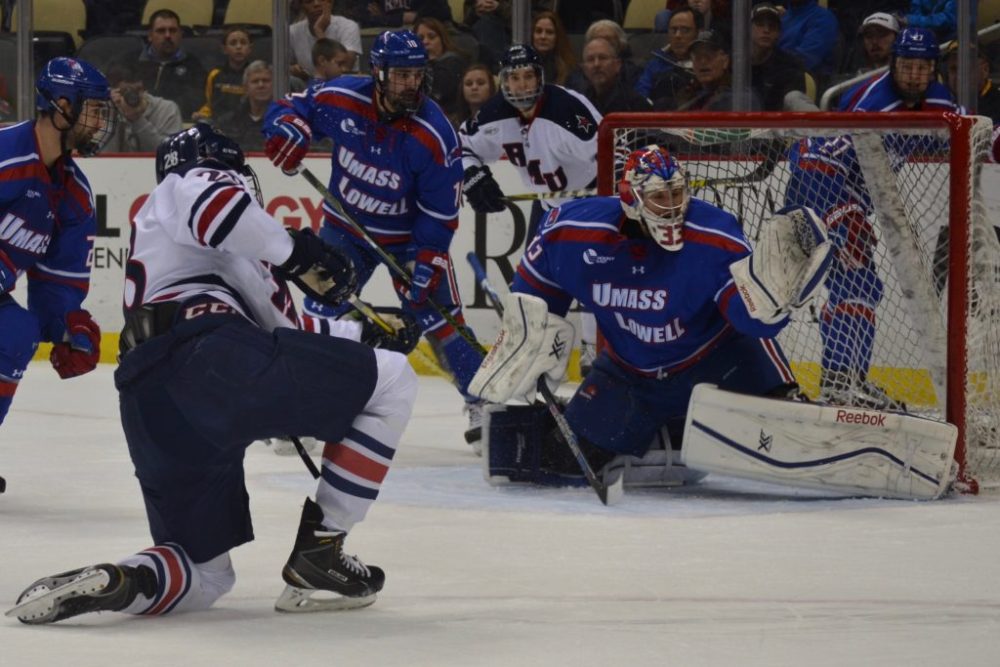 Here’s whats going on elsewhere in the hockey world.

Vincent Trocheck scored a goal for the Florida Panthers against Carolina on Feb. 28. The forward also added four assists. … Brandon Saad (Pine-Richland) had two goals, as well as the game winner against Minnesota. He assisted on one. … Matt Bartkowski (Mt. Lebanon) added his first assist on the season for Calgary on Sunday. … J.T. Miller (Pittsburgh Hornets) registered two assists for the Rangers.

Riley Barber scored a goal and added two assists for Hershey. The forward has spent the past couple of weeks between the NHL and AHL levels, getting three games in with the Washington Capitals. … Former Robert Morris standout and career points leader Zac Lynch had a goal and an assist for the Springfield Falcons.

There has been quite a bit of movement amongst local players the ECHL these past couple weeks, as a handful of Robert Morris alumni have found new homes. Chase Golightly and Adam Brace landed in Reading after previously playing for Florida, while Scott Jacklin was signed by the Norfolk Admirals after spending his entire professional career in Brampton.

Forward Tyler Murovich (Mt. Lebanon) had three goals for the Atlanta Gladiators. Adam Brace (RMU) tallied a goal in the same game for the Everblades before the move to the Royals … Derik Johnson had two assists for Reading on Feb 28 against Elmira. … Donnie Harris (Pittsburgh Hornets) had a goal and an assist for Quad City. … Eric Levine (RMU) and Jake Hildebrand (Butler, Pa.) have had a tough season for Indy, but the past couple weeks have been a little fairer to each, as Levine had a .912 save percentage over four games, and Hildebrand went 1-1. … Cody Wydo (RMU) just continues his torrid pace, scoring three goals and adding four assists. … Wydo’s successor as Robert Morris captain, Tyson Wilson, had two assists for Tulsa.

Former Robert Morris alternate captain Jeff Jones put up six goals over a weekend for the Peoria Rivermen. The forward leads the Rivermen in scoring after joining the team in the middle of the year. … Aaron Clarke (RMU) had three goals and three assists for Pensacola over the same span. … Zach Tatrn (Lower Burrell) chipped in four goals and an assist for Roanoke.

Former Robert Morris captain Ashley Vesci scored her first professional point for the Buffalo Beauts on March 4 in Connecticut. The 2016 graduate has skated in ten contests this year for the squad.

The postseason is underway in some parts of the world. Jesse Root (Mt. Lebanon) chipped in an assist for HC Bolzano (EBEL) in their 4-1 series win over Liwest Linz. … Greg Gibson (RMU) contributed one goal and three assists for SønderjyskE (Metal Ligaen) to lead them to a 3-2 series lead over Esbjerg. … Andrew Blazek (RMU) and Aalborg (Metal Ligean) lead Gentofe 3-2.

Trevor Rektenwald (Peters Twp.) had a goal for Ferris State in their WCHA series against Bowling Green. The Bulldogs ended their season by getting swept by the Big Green. … Colin DeAugustine (Pens Elite) had his freshmen season end in Mercyhurst at the hands of Army in dramatic fashion. The netminder came on in relief in the first game of the series, win an overtime contest in the second game, and drop the third, carrying a .914 save percentage through the postseason. Teammate Brian Sienerth (Pens Elite) gathered an assist in the series. … Andrew Gaus registered two goals in the postseason for Yale; the series-clinching overtime goal against Dartmouth, and a goal against Harvard.

OJHL: Trenton Golden Hawks forwards Austin Tonkovich (Cannon-McMillian) and Connor Quinn (Quaker Valley) are awaiting their opponents in the second round, as they defeated Newmarket 4-2 after being down 2-1. Tonkovich added a goal and Quinn an assist.

NOJHL: Nick Long (Armstrong) and William Casey (Pens Elite) are bringing #burghhockey to the juniors, as Long’s Elliot Lake Wildcats and Casey’s Soo Eagles face off in a best of three first round, which is tied 1-1 with the rubber match to be played on Tuesday night. Long has one goal and an assist, Casey a goal and two assists.

Local forwards for the Amarillo Bulls have had a couple of good weeks, as Brendan Walkom (Moon) scored two goals. … Eric Cooley scored five goals and added three assists. … The Johnstown Tomahawks forwards also had an alright stretch as Dalton Hunter (Latrobe), Adam Pilewicz (Quaker Valley), and Luke Singley (Latrobe) all added a goal for the week. Singley would also contribute an assist. … Paul Maust (Mars) had three assists for the Wilkes-Barre/Scranton Knights.