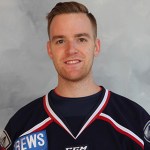 Former Pittsburgh Hornets goaltender Parker Milner had a stellar week in net for the South Carolina Stingrays of the ECHL, compiling a 3-0 record in four games with a .913 save percentage. The 26-year-old netminder has spent time in the ECHL and the AHL over the past couple seasons after completing four years at Boston College, where he won two NCAA championships and was the MVP of the 2012 tournament. The Mt. Lebanon native has a mark of 13-5-1 on the season with a .904 save percentage.

Here’s what is going on elsewhere in the hockey world.

Another former Pittsburgh Hornets goaltender, John Gibson of the Anaheim Ducks, compiled a 2-0 record this week. … Vincent Trocheck scored three goals and added two assists for the Florida Panthers. … J.T. Miller scored the game winner for the New York Rangers on December 31, and added two more goals and an assist for the week. … Brandon Saad scored a goal and three assists for the red-hot Blue Jackets, who have won 16 straight games.

Former Robert Morris standout and Shaler alum Zac Lynch made his AHL debut this season with the Springfield Thunderbirds and scored his first goal in the the following game. It’s Lynch’s second stint in the AHL, having spent time with the Portland Pirates at the end of the last season.

Valencia native Ty Loney was named to the ECHL All-Star game this past week. … Goaltender Matt Skoff (McKees Rocks) was traded from the Florida Everblades to the Colorado Eagles. … Former Robert Morris captain Tyson Wilson scored a goal and an assist for the Tulsa Oilers. … Donnie Harris scored a goal for Quad City. …. Adam Brace added a goal for Florida.

Former Robert Morris defenseman John Rey signed his first pro contract with the Knoxville Ice Bears and scored a goal in his second game with the squad. … There was plenty of former-Colonials action in the league, as Aaron Clarke scored a goal for Pensacola and Jeff Jones (Peoria) and Joe Harcharik (Fayetteville) each added two assists for their clubs.

Robert Morris alum Greg Gibson is now with his third team in his first professional season. After two stops in the second-tier German league, he signed with SønderjyskE in Denmark, but has yet to play a game. … After making a similar mid-season move, Gibson’s former RMU teammate Matt Cope has done well, scoring three goals and adding an assist with HK Nitra in the Slovak Extraliga. … Mt. Lebanon’s Jesse Root (HC Bolzano, EBEL) scored a goal and four assists.

Burgettstown native Colin DeAugustine stopped 39 of 41 shots he faced for Mercyhurst against Alabama-Huntsville in the consolation game of the Mariucci Classic in Minneapolis.