Lauren Bernard grew up playing hockey in many of Pittsburgh’s local rinks, including the RMU Island Sports Center. A native of Madison, OH, located along Lake Erie and roughly 2 hours from Pittsburgh, Bernard played for the Pens Elite as she advanced through her hockey career. Now, a rink she has played on for years is even more meaningful.

Her career came full circle in 2019, returning to the RMU Island Sports Center as a freshman with the Clarkson Golden Knights. Bernard and the fourth ranked Golden Knights played then-No. 10 Robert Morris in an early-season matchup between ranked opponents.

For Bernard, it was going to be a memorable weekend regardless of the result, as she was playing in a rink she was familiar with in front of friends and family. At weekends end her team skated away with a 3-3 tie and thrilling 6-5 overtime victory in the two-game set.

The victory, however, was even more memorable than a normal victory. Bernard scored her first NCAA goal, in what was then her fifth career game, an impressive accomplishment.

“It was amazing, an experience I’ll never forget,” Bernard said. “Especially doing it at Robert Morris, which I grew up playing at a bunch of times with the Pens Elite program. So it was awesome to get my first goal here.”

Her head coach at Clarkson, Matt Derosiers echoed that excitement for his first year defender scoring her first goal in her “homecoming” game.

“That’s pretty exciting for her,” Derosiers said. “She had a lot of fans here that came and supported her so I’m sure it’s pretty special to her to be able to score her first goal in front of so many friends and family.”

Clarkson plays in the Eastern Collegiate Athletic Conference, with most schools in New York and other cities in the North East. The series against Robert Morris was a non-conference matchup, so to have her score her first collegiate goal in her hockey “hometown” was definitely special, and perhaps surprising given the sample size of games. What wasn’t surprising, however, was the fact that Bernard had success playing hockey in Pittsburgh.

While playing with the Pens Elite, her teams excelled. Her 12U team were Tier 1 Champions, and her 14U and 16U teams were both runners up at Nationals. Bernard rose individually on the national radar, playing with Team USA on the 2018 U-18 Women’s Select team. Bernard played in 3 games of a series against Canada.

She clearly stood out to many people during her youth and midget major hockey days, including her coach at the time with the Pens Elite, Cobina Walkland.

“Lauren was an absolute pleasure to coach during her time with the Pittsburgh Penguins Elite program,” Walkland said. “She is a dynamic defenseman who plays an honest 200 foot game. Her strong hockey IQ allows her to shut down and sort out plays quickly while also having the capability to contribute offensively.” 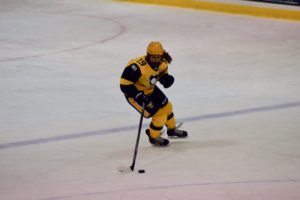 Her play with the Pens Elite also got her onto the radar of many college hockey teams. Her Clarkson Bio mentions Providence, Vermont, Quinnipiac, Yale, Penn State, Ohio State, Minnesota State, Boston University and Cornell as schools that recruited her.

In the end, she chose Clarkson. The Golden Knights have won 2 of the last 3 National Championships and are one of the perennial powerhouse teams. Unsurprisingly, their coaches have high expectations for their recruits. However, Bernard has been able to adjust quickly thanks to her prior hockey experience.

“It’s really tough, they expect a lot out of you especially coming in,” Bernard explained. “They expect their freshmen to come in and play and contribute, so it took a lot of hard work, and I think through my time at Pens Elite they really prepared me for this and it’s just amazing to be able to have an impact as soon as I got here.”

Her hockey background obviously stood out in her recruitment. That being said, there’s much more about her that made her a desirable student athlete to bring in to play for Golden Knights.

Bernard made an impact in her first year of college hockey, tallying 11 points in her first 22 games, and is tied for sixth on the squad in scoring. She’s demonstrated her playmaking abilities from the blue line with 10 assists, to go along with that one, very memorable, goal.

That early success in college doesn’t surprise her former coach with Pens Elite. Much like her current coach noted, her character has a lot to do with her success as a player.

“Lauren is an outstanding teammate and her dedication both on and off the ice is unparalleled,” Walkland said. “It does not surprise me that she’s carried her success to Clarkson University.”