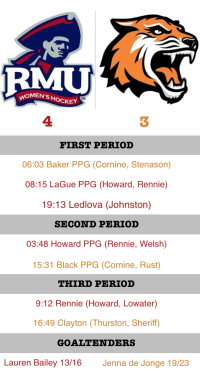 Howard had been sitting on 98 career points, so her three-point breakthrough gave her over 100 in her collegiate career — the fourth player in the history of the program to do so.

The Colonials have had nothing short of a spectacular run to start the 2016-17 campaign, from the unexpected growth of a youthful core to the rock-steady play of a solid upper class. An 8-1-4 start to the season and a ranking just inside of the top ten should be all you need to qualify this as a special season thus far for Paul Colontino’s squad. The one major component that has kept them from being even more dangerous has been their ability to not be, well, explosive enough.

The Colonials opened their two-game set with the 1-12 Tigers hoping to reverse a trend that had been plaguing them all season. Of their seven wins, six had been by one goal. Instead, you can make that statistic seven out of eight.

The Colonials opened up a three-goal lead early in the second period with Howard’s century-mark clinching power-play goal. But the Tigers scored twice more, including a Cassie Clayton goal on a twice-reviewed scramble on top of goaltender Lauren Bailey.

The line of Sarah Quaranta, Mackenzie Johnston and Aneta Ledlova continued their recent offensive surge when Johnston swiped the puck off of an RIT defender directly to Ledlova in front, who deposited it behind de Jonge with 47 seconds to go in the first period.

Amber Rennie also registered a goal and two assists. … Howard moved into sixth in the NCAA in scoring with 19 points. … Bailey improved to 5-1-1 on the season. … The Colonials and Tigers finish the two-game series with a 2:05 p.m. face-off on Saturday at the Gene Polisseni Center. Look for senior goaltender Jessica Dodds to get the start. Dodds received the College Hockey America Goaltender of the Week honor three times in the past eight weeks dating back to the 2015-16 season.