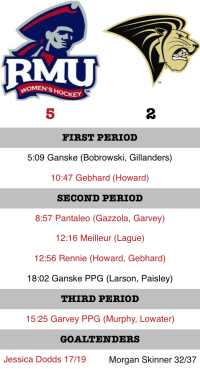 NEVILLE TWP, Pa. — In a six-team league, it’s awfully tough to be a one-line team.

It’s tough to be a one-line team at any level of hockey, but in College Hockey America, where each team played each of their five conference foes four times in the regular season before doing battle again in the conference tournament, it’s nearly impossible.

While the Robert Morris Colonials women rattled off a 14-1-5 start to their season and a No. 7 national ranking in the process, they did it mostly on the offensive contributions of the top line of Jaycee Gebhard, Brittany Howard and Amber Rennie.

But in order to advance to the team’s ultimate goal — the NCAA Tournament — they were going to need to develop a second line that could be an offensive threat. That lesson was proved as recently as one game ago, when the top unit had 16 shots on goal but just once found the back of the net in the team’s second loss of the season.

In the RMU’s 5-2 win over Lindenwood Saturday, they got some encouraging developments on that front. Five different Colonials lit the lamp, and two of those five are the kind of offensive players that if they get going, could be serious scoring threats for the rest of the season.

After Gebhard started the scoring to tie the game at 1-1, Jessica Gazzola found right-winger Amanda Pantaleo all alone in the slot and “Pants,” as she’s referred to by her teammates, buried a one-timer to give the Colonials a lead they would never relinquish.

The play was one that was emblematic of what’s been clicking for the unit, according to head coach Paul Colontino. Gazzola and left-winger Maeve Garvey’s hard work down low helped spring the puck free for Pantaleo, who was wide open and cashed in.

“It’s the little things,” Colontino said after the game. “In the first half [of the season], small plays disrupted what they were capable of achieving on the ice. … They’ve become so much more thorough with the puck and their puck possession that they’ve been able to wear defensive down a little bit and take advantage.”

The combination of Garvey, Gazzola and Pantaleo seems to have been clicking lately for the Colonials and has really developed into the second scoring line they’ve needed. Pantaleo now has nine goals on the season, but eight of them have come in the last nine games. Suffice to say, the talented junior seems to have found her stride.

“We’ve been building chemistry as a line for the last few weeks and it just seems like we were waiting to get that first one and once we finally got it, the rest are following,” Garvey said. “We’ve been rolling the past couple weekends.”

Garvey’s been chipping in recently, too, giving the line a two-shooter balance that is tough to defend. Of her six goals on the year, four have come in the last nine games, including a third-period power-play snipe to close the scoring against Lindenwood. The hope is that the strong play of the second line continues, which would takes some of the pressure off that top unit and prevent opposing teams from game-planning heavily against it.

“It’s not really a secret,” Garvey said of RMU’s top line’s success. “You play these teams four times a year, at the least. They figure it out pretty quickly. We have to make sure we throw so much at them that they can’t handle it.”

A MEASURE OF CONSISTENCY

The success of Garvey, Gazzola and Pantaleo together has allowed Colontino to keep his top two lines the same for a few games in a row after spending much of the first half mixing and matching with everything but the top unit.

That type of consistency has helped build their success, but Colontino cautioned that it’s something that must be earned continually.

“We call that accountability,” Colontino said. “If you want to play with the same people, you have to show up every day and that includes practice.”

“I think we’re getting used to playing with each other,” Pantaleo added. “I think we got that monkey off our back at the end of the first half and we’re just going to keep scoring.”

Pantaleo’s goal started a three-goal outburst in the second period by the Colonials, which was a big deal for the team after their second period had gone sideways the night before.

On Friday, they had outshot Lindenwood, 21-5, in the middle frame, but couldn’t crack a scoreless tie. On Saturday, the shot advantage was less pronounced, but the three goals broke open the game.

“It was a good turnaround,” Pantaleo said. “We got it together, shook our heads a bit in the intermission and came back strong. We knew what we needed to do.”

Even though the Colonials were happy with the Saturday result, the 1-1 weekend against Lindenwood could still be seen as something of an unsatisfactory result against the Lions, who had just four wins on the season coming in.

“That’s the thing about the CHA, that any team can beat any team on any given night,” Pantaleo said. “Something like this was a bit of a wake-up call for us that games aren’t always going to go our way. We can’t win every game, so the fact that we came out [Saturday] after a game like [Friday] and turned it around and threw it right back at them was really good.”

Garvey went as far as to say that suffering the loss may end up being a positive in the long run for the Colonials.

“It’s good to face a bit of adversity,” she said. “Obviously, our record in the first half was really, really good, but we’re going to face some adversity heading down into the playoffs. To face it now and hopefully learn a lot from it and not make the same mistakes twice is pretty good.”

Howard’s two assists gave her 72 for her career at Robert Morris. That’s a new program record and Howard, a redshirt junior, still has almost a year and a half remaining to add onto it.

Goaltender Jessica Dodds needed just 17 saves to get the win. She’s now 7-0-4 on the season and is fourth in the nation in winning percentage.

The Colonials remain in first place in the CHA with an 8-1-1 record and are three points ahead of Syracuse. They will visit Mercyhurst next week for a two-game set against the fourth-place Lakers.