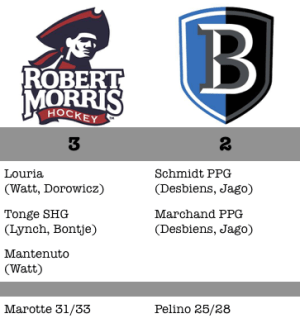 NEVILLE TWP., Pa. — Daniel Mantenuto scored late in the second period to break a deadlocked battle between Robert Morris and Bentley in the deciding Game 3 of the Atlantic Hockey first-round playoff series.

The Colonials will advance to face Holy Cross in the quarterfinals Mar. 9 – 11.

BETTER AT EVEN STRENGTH

To say the Colonials were better at even strength might have been an understatement. Though they had less time in that situation than they would have liked. The Colonials out chanced, out shot and out worked the Falcons when all things were level as they outscored their opponent 2-0 on the night, and 6-2 on the weekend at even strength.

“I thought five on five we were outstanding,” Colonial head coach Derek Schooley said. “We struggled with their power play, we had some big penalty kills after.it was 2-2 and even after it was 3-2. Then we stayed out of the penalty box in the third but we did a very good job of limiting their options. We had so many chances that we didn’t convert. If we keep getting this amount of chances, we’re going to break through and get more than three goals.”

PARADE TO THE PENALTY BOX CONTINUED

After taking seven penalties on Saturday night, the Colonials parade to the sin bin continued into Sunday as they were assessed another seven penalties in less than 40 minutes of hockey. The Falcons once again put the opportunities to work, chiming in on two chances as they climbed back into the game and pulled even.

Kyle Schmidt pulled the trigger and beat Colonial net minder Francis Marotte at 18:40 to give the Falcons some momentum heading into the dressing room. Then n the second period, it was Charlie Marchand who tied the game with his shot from the high slot as Michael Coyne watched from the penalty box.  Robert Morris was able to avoid shorthanded situations in the third frame altogether though as they played in the Bentley end for long stretches of the final twenty minutes.

However, even when the Colonials weren’t at full strength, they still found ways to get the job done offensively as Alex Tonge, who had three goals on the weekend, was able to put away a highlight reel shorthanded goal at 17:55 of the first period to double the Robert Morris lead.

“You would have thought we were the most penalized team in the nation this weekend ,” Schooley said. “We’re the second least penalized team in Atlantic Hockey coming into the weekend. I can’t understand it, I don’t know why we had targets on our backs for penalties. I don’t get it. I’m just going to chalk it up to an aberration. Through two periods they had 19 shots and 14 were on the power play.”

In taking two out of the three games this weekend, leading scorer Brady Ferguson did not register a point, and didn’t need to. Thanks to goals from Michael Louria, who got the Colonials off and running with a cleverly timed wrap around at 13:46 of the first period, and the aforementioned game winner from Mantenuto. The sophomore center who had just two goals in the regular season,  scored his second in as many days on Sunday night as he pounced on a loose puck near the goal to finish a workmanlike shift and give the Colonials the lead for good at 15:18 of the final frame.

“It was definitely a grind but we just had to use our speed, get pucks deep and try to beat their defensemen to pucks and when we did we just hemmed them in and created chances,” Mantenuto said. “It was a big win for us, a good confidence booster. It’s a little tough when pucks aren’t going your way but as long as you’re creating chances your doing something. You just have to stick with it. I told myself all year that I just needed to trust that the puck was going to go in eventually.”

All in all, it was a good weekend for the Colonials depth lines as Mantenuto’s heriocs were supplemented with goals from Brandon Watt, Matthew Graham and Luke Lynch.

The Colonials had been looking to make improvements all year on keeping leads firm, and putting teams away. On Sunday night, they did more than just hold on with a one goal lead, they looked to add to it. Robert Morris came up with nine shots in the final frame and nearly put a fourth goal in on several different occasions as Falcon goaltender Aiden Pelino came up with some key saves to keep the result in doubt for the meantime.

In the third period, the Robert Morris defense and goaltender Francis Marotte did their job in a precise and hard working fashion to preserve the victory.  The Falcons out-shot (33-28) and out-attempted (62-53) the Colonials for the game mostly due to the obvious disparity in power play time but Robert Morris blocked 18 shots and Marrotte stood tall with 31 saves.

“Our defense was good moving pucks up the ice, but your defense is only as good as your goaltender and I thought our goaltender was outstanding tonight.  This could be a game that springboards you to really good things going forward.”

Starting VI (brought to you by @Beckster20 and @Larry_N_Snyder) pic.twitter.com/i1YloGCvvs

The Colonials will play at Holy Cross in another best-of-three with a berth to the Atlantic Hockey final four on the line. The Colonials went 1-0-1 against the Crusaders in their only series this season, which was played at RMU Island Sports Center.