Robert Morris University will build a new on-campus arena for its men’s and women’s basketball teams, the university announced Thursday. The new building, named the UPMC Events Center, will be constructed near the current basketball arena, the Charles L. Sewall Center, will seat over 4,000 people and will also host the school’s women’s volleyball team.

Missing from the university’s announcement is an on-campus home for the schools men’s and women’s ice hockey programs, which play 5.5 miles away on Neville Island. The two programs have made fast ascents to national prominence in the 12 years since they were founded.

Just this season, the men’s team has beaten two top-20 teams in Ohio State and Quinnipiac and the women’s team is ranked No. 7 in the country and is in first place in College Hockey America.

The teams play at the 1,200-seat 84 Lumber Arena, part of RMU’s Island Sports Complex. Though only built in 1998, the men’s team frequently sells out the small rink and both squads are forced to compete with high school and youth teams for ice time.

“I think it’s a pretty big missed opportunity for the school,” Robert Morris captain Rob Mann said in a telephone interview Thursday. “Obviously, our program and the women’s program have had quite a bit of success over the last couple of years both on and off the ice. We have a chance to become a legitimate force in college hockey and to have a new arena built on campus and for us to not be included in it is pretty frustrating. Why aren’t we in the conversation?”

It’s a valid question, as the hockey programs have come a long way in their nascent existence. 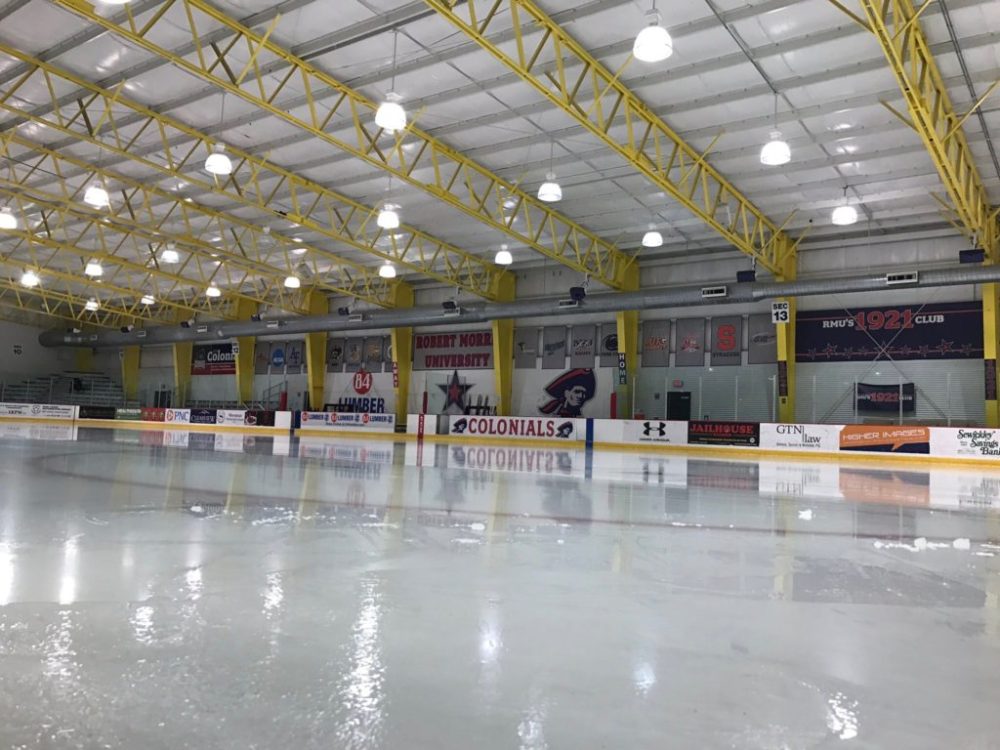 While there’s obviously a big difference in the level of national attention that Division I college basketball gets when compared with college hockey, RMU is also picking at a much smaller piece of that larger pie.

In women’s hockey, the difference is even more pronounced. The Colonials are one of 35 national programs and have an automatic conference tie-in to an eight-team national tournament.

Both teams have proven that they are more than cannon fodder at the next level, as well. The men’s team is 6-1-1 against nationally ranked teams over the last two seasons. The women’s only game this season against a ranked team was a tie against then-No. 5 Clarkson.

Considering the growth that has already happened with the teams in their short existences, it isn’t much of a stretch to imagine the Colonials competing for multiple championships in ice hockey in the next 30 years — the typical life span of an arena. The same probably cannot be said for the basketball programs. 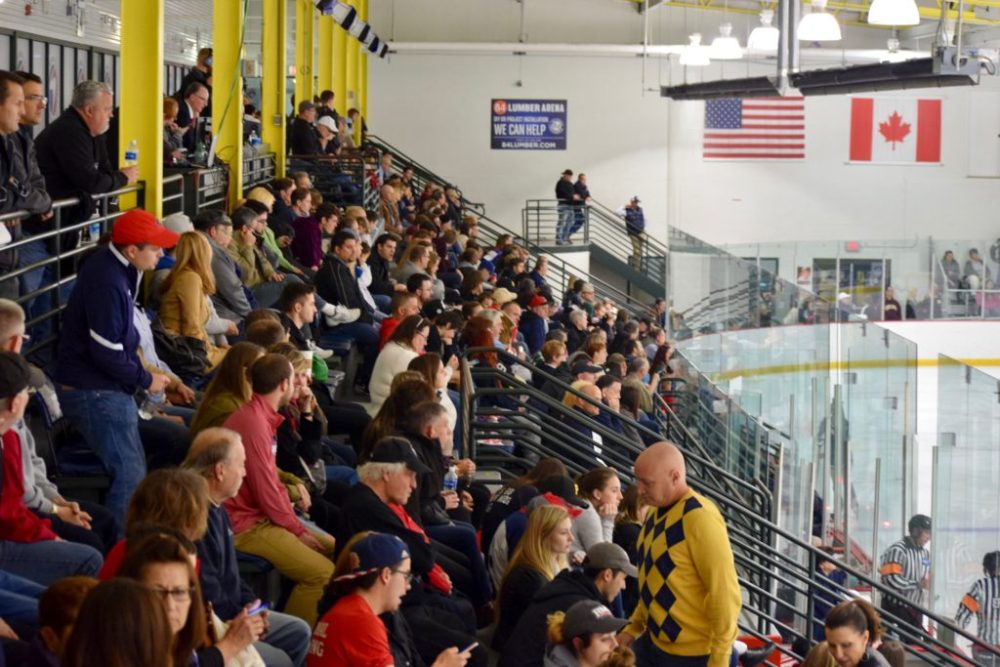 KEEPING UP WITH THE CONFERENCE

There’s no question the success the Colonials have had warrants a further investment in the program. But advances by other schools in college hockey may soon make them necessary.

In RMU’s Atlantic Hockey Conference, RIT and Canisius are playing in brand-new buildings and Bentley committed to build new on-campus rink. AIC and Sacred Heart have made arrangement to share facilities with local professional teams, leaving RMU lagging behind. That’s not lost on Mann, who isn’t that far removed from being a recruit himself.

“I know we have some recruitment classes settled in for the next couple of years, but junior players want a nice rink and a nice place on campus,” he said.

The recruiting angle is ever-present in modern collegiate athletics and there’s no question that facilities play a large part in wooing potential student athletes.

“You’ve got to make sure that you keep up because you don’t want to get far behind,” head coach Derek Schooley said in 2016. “Before you know it, you’re lagging tremendously. You almost have to stay ahead of the curve. Kids are from the new generation where they want all the amenities. … Kids want to be pampered. They want to be treated like professionals and the better you do that, the more it resonates with recruits.”

The team has made strides to improve the locker rooms and off-ice facilities at the Island Sports Center, but there’s only so much that can be done to a building that is already bursting at the seams. At some point, a move is going to be necessary, something Schooley has acknowledged.

“In 20 years, I would hope that we’d have a nice, 2,500 or 3,000-seat building on campus and that would keep us at the upper echelon of our league,” Schooley said in 2016, while also acknowledging his own program’s lack of fundraising ability. “We’re such a young program still. Our oldest alum is [33] years old. There’s not a lot of excess money floating around. We have to do the best with what we can.”

Schooley released the following statement on Thursday regarding the new on-campus basketball facility:

“I am very excited for our university and the continued growth of the Robert Morris campus. Our hope is that hockey continues to have success at Robert Morris which leads to something in the future.”

While that hope for future remains for Schooley and the program’s long-term success, it seems that this batch of RMU hockey players will be left in the cold.

UPDATE: A direct quote from Mann was edited for clarification.