Ekberg, 20, is currently playing with the Janesville Jets of the North American Hockey league, where he’s scored four goals and recorded 14 assists in 29 games this season.

“I’m extremely excited to commit to Air Force,” Ekberg said in a press release. “This year has been huge for me, becoming a leader on the team and having more chances to play and make big impacts on every game. It’s had a huge impact on my confidence.”

Ekberg graduate from Peters Township in 2015. Since then, he’s played for Janesville with two stints in the USHL, one with with the Des Moines Buccaneers and the other with the Youngstown Phantoms. He’ll join Air Force next season.

“This year Carter has taken a huge step and evolved into a complete, two-way guy on the back end,” Jets assistant coach Corey Leivermann said. “As the ‘D’ coach, he’s meant everything to me and to our group. When he’s healthy I lean on him heavily because I know he consistently gives us what we need in all situations. Whether it’s the power play, penalty kill, five-on-five, the first minute of a period, the last minute of a period, overtime, it doesn’t matter. Carter Ekberg is our guy.”

Air Force plays in the Atlantic Hockey Conference and plays Robert Morris every season, assuring Ekberg some return trips to his hometown. 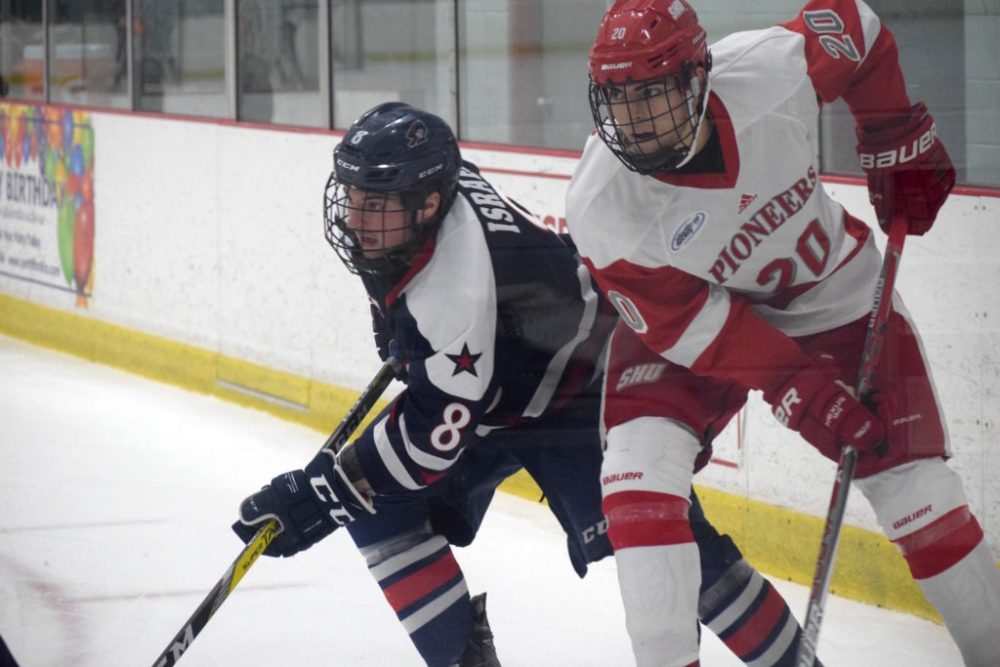 Eric Israel battles in the corner against Sacred Heart in 2017. — BRIAN MITCHELL

Israel, a junior, scored a pair of goals last weekend against Sacred Heart as the Colonials swept the Pioneers and moved to second place in Atlantic Hockey. Israel now has four goals and 11 assists for 15 points this season. He played his 100th career game on Saturday. 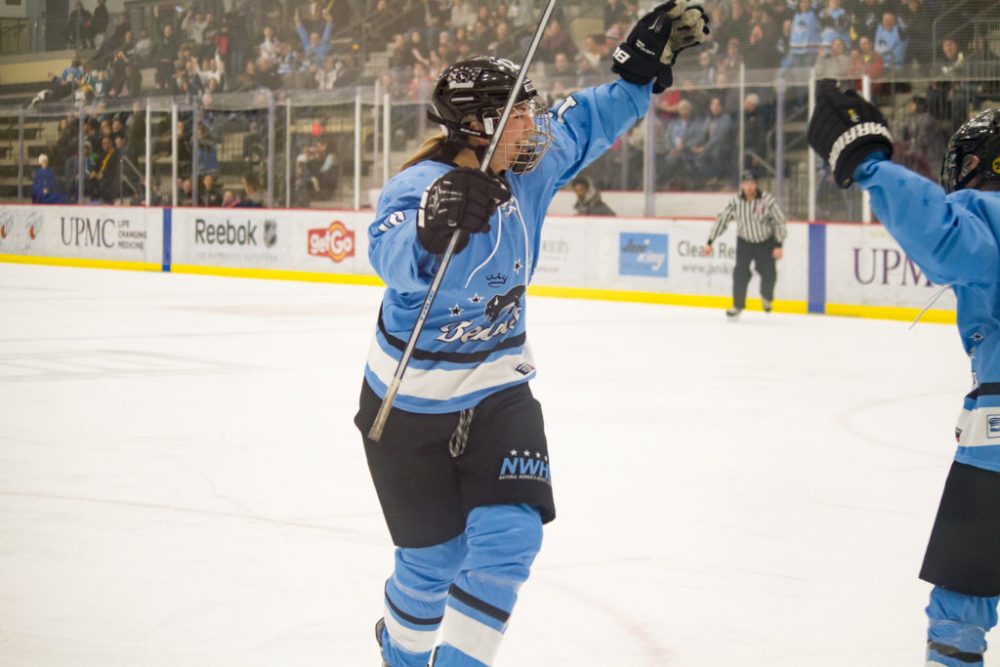 Former Robert Morris and current Buffalo Beauts forward Rebecca Vint has been added to the NWHL All-Star Roster. Vint has two goals and three assists in 11 games for the Beauts this season.

Meanwhile, the Beauts have clinched the No. 2 seed in the Isobel Cup playoff and will host their first-ever home playoff game at 5:30 p.m. at Harborcenter in Buffalo. 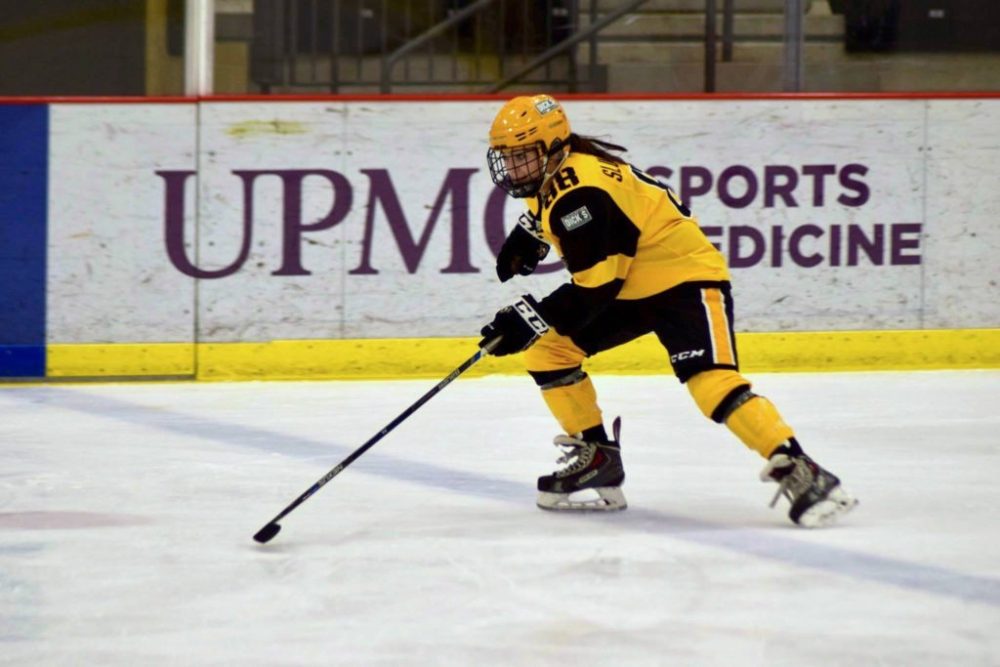 Ekberg wasn’t the only local commit this week. Pittsburgh Penguins Elite U16 forward Serena Slusarcyk committed to Robert Morris on Wednesday. Slusarcyk is a Derry, Pa. native and will join Robert Morris for the 2021-22 season.

The U16 team is current on hiatus until their final home game of the season, March 16 against Gilmour Academy. That game will be played at Baierl Ice Complex in Warrendale and face off at 2:30 p.m.

The Robert Morris women are ranked No. 10 in the USA Hockey/USA Today coaches poll after being ranked No. 9 in the USCHO.com earlier in the week. The Colonials host Lindenwood this weekend at 3 p.m. on Friday and for senior day at 1 p.m. on Saturday.

TWO IN A ROW 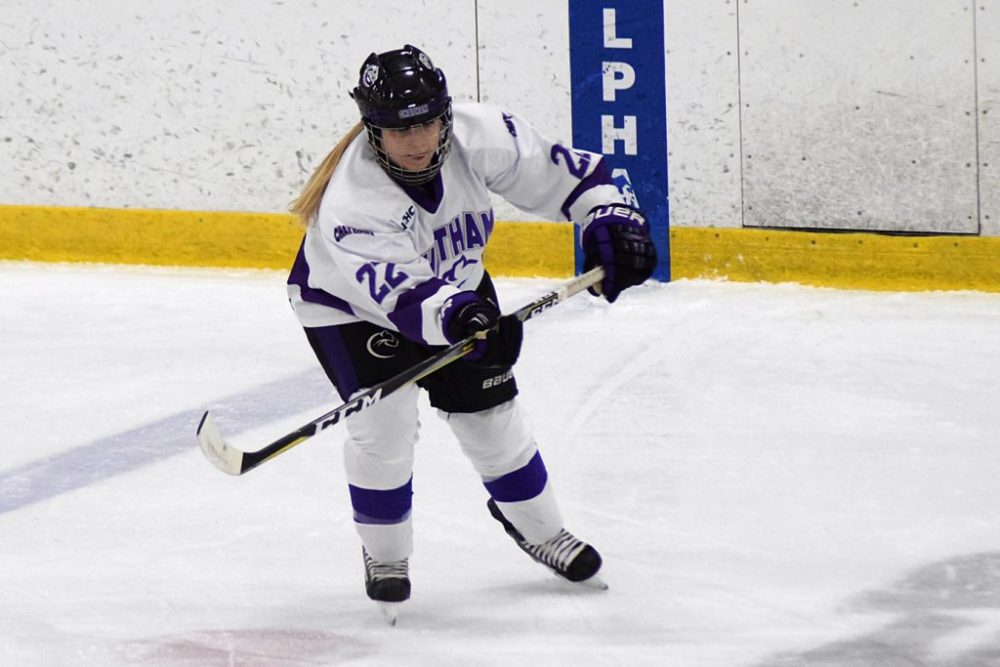 Kasanda Petersen moves the puck for Chatham against King’s on Feb. 3. — BRIAN MITCHELL

Chatham senior defender Kasandra Petersen was named to the D3Hockey.com Team of the Week for the second week in a row. Petersen had seven points and a plus-9 rating in the Cougars’ sweep of King’s College last weekend. The Cougars are off this weekend before finishing their season next weekend with a visit to Lebanon Valley.

The second annual East-West Challenge between the PAHL and DVHL will be held this weekend at UMPC Lemieux Sports Complex. The top three AA teams from each league are selected to participate. More information can be found at
http://www.upmclemieuxsportscomplex.com/ewc