Jessica Gazzola and Dakota Derrer during a game on Nov. 4, 2016. -- BRIAN MITCHELL 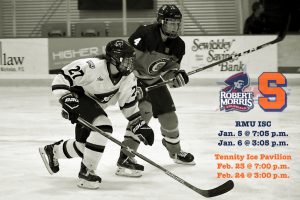 Syracuse, currently in the midst of a four game losing streak, dropped games to Lindenwood, No. 3 Clarkson, and were swept by Mercyhurst. During that stretch, the Orange have been out-scored 13-2.

Robert Morris is 2-2-1 in their last five, splitting home series with No. 5 Ohio State and Mercyhurst before tying No.4 Colgate in Hamilton, N.Y.

The Colonials and Orange last faced off Mar. 4 in the College Hockey America championship, where Robert Morris received goals from Jessica Gazzola and Brittany Howard en-route to the title. Goaltender Jessica Dodds stopped all 32 shots she faced and was named the tournaments most valuable player.

The regular season series also ended in favor of the Colonials, where they finished with a 2-1-1 mark.

One of the top goaltenders in the CHA, Miller is coming off of a breakout season in which she set club records in shutouts (nine, also a league record) and overall goals-against average (1.58). Miller is fast, agile, and highly competitive. She recorded her 1,000th career save on Dec. 9 against Mercyhurst.

Milne-Price spent the past three years watching Dodds and Lauren Bailey defend the net for the Colonials, but saw action-in-relief against the Orange in 2015-16. Now the bona-fide starter for the Colonials, Milne-Price has been equally up to task as her predecessors, keeping Robert Morris in close games while carrying the squad when necessary.

Junior defender Allie Munroe led all Orange blue-liners in points in 2016-17 with 21, taking home the CHA Defender of the Year award as well as first team all-conference honors. Currently leading the team in blocks, Munroe will miss the weekend series, as she will be suiting up for the Canadian National Women’s Development Team in the 2018 Nations Cup in Fussen, Germany. She was one of only seven defenders selected from the nation, as well as being the only player selected from the CHA conference.

Syracuse poses a formidable threat any time Miller plays lights-out hockey, but the loss of Munroe could cause some major matchup issues for the Orange. Robert Morris has four balanced forward lines, and a lethal backline that can activate at any given moment. Robert Morris also has their full compliment of players. The Colonials takes game one, but Miller backs Syracuse to a second-game tie.