BUFFALO, N.Y. — The officiating standard has clearly changed in college hockey. Across the country, penalties are up as officials have taken a hard-line stance on the rulebook in the early part of the 2016-17 season.

The Colonials surrendered eight power plays and gave up five power play goals in their 6-3 loss to Canisius Friday.

The officials called the game tightly, but fairly, according to Robert Morris head coach Derek Schooley.

“I thought the referees called what they’ve been calling,” he said. “We all know they’re calling penalties. Except for one or two, I could see what the referees were seeing. I really didn’t have any problems with the officiating. I think they were pretty good.”

There wasn’t a theme to the penalties Robert Morris took. They had a hold, two trips, two interference minors, a high stick, a hook and a charge. If they were playing minor penalty bingo, they may have had a winner. Instead, their penalties, especially the four in the second period, helped hand an easy win to the Golden Griffins.

“It seems like they kind of piled one after another,” said captain Rob Mann. “There was some bad timing there. Three in a row in the second period didn’t help.” 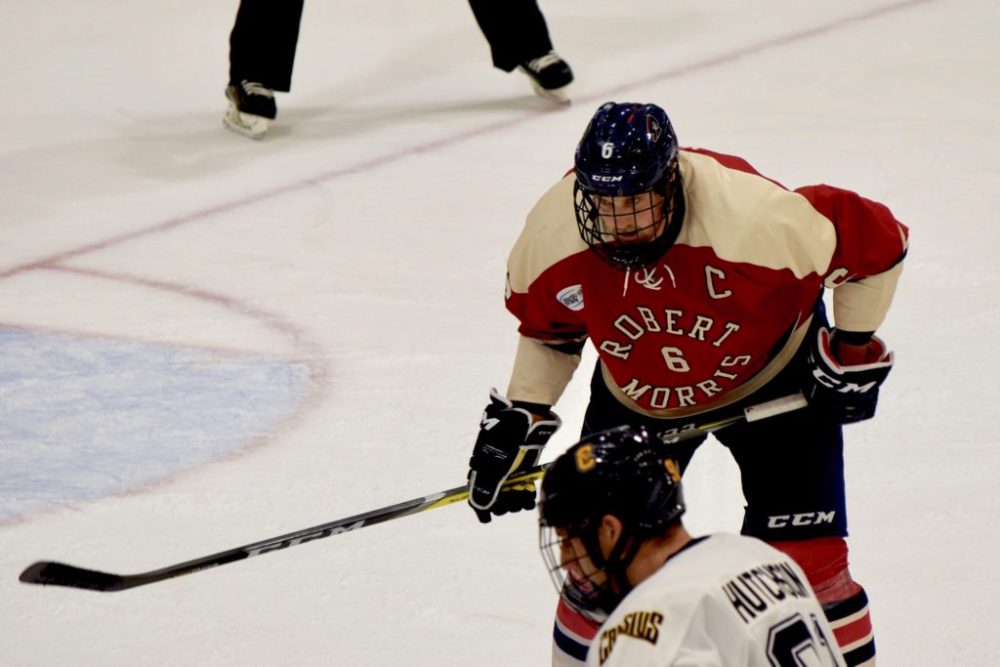 Robert Morris has 10 freshman and of the team’s returning players, only Mann, Timmy Moore and Spencer Dorowicz were regular penalty killers a year ago. It’s been a steep learning curve for the rest of the unit.

“They took advantage of our inexperience in penalty killing and their power play was very good,” Schooley said.

But he also said the two situations aren’t isolated. It’s no secret that Robert Morris’ penalty killers are inexperienced and they struggled two weeks ago at RIT, as well. That should put an even bigger emphasis on clean play in the minds of his players.

“When you know you’re struggling to learn how to kill penalties and play at the next level, with so few experienced penalty killers, we can’t take as many penalties as we did,” he said.

Despite spending so much time shorthanded, the Colonials still outshot the Griffins, 30-28. At even strength, Schooley thought the Colonials got the better of the play.

“I liked a lot of things about our game,” he said. “It’s tough to say we played poorly, except for one facet of special teams. Our penalty kill didn’t get the job done and the rest of our game was pretty good. There was a lot of things I liked from our freshmen. I thought Daniel Mantenuto was very good tonight. I thought Kevin Lavoie played hard. I liked a lot of our game. We really did some good things 5-on-5. We were not good 4-on-5.”

He said he can make some personnel changes before the rematch between the same two teams takes place Saturday night, but that it’s hard to single out a player that needs to go.

“We have to watch video and we have to teach them better,” he said. “We have to make sure that they understand. I don’t know if we can change schemes, but personnel, we can change. I was trying a lot of different combinations at the end just to get some penalties killed. … When your experienced guys are the ones on the ice for goals, that’s the one that’s alarming.”

Senior goaltender Dalton Izyk went down in the middle of the second period with a head injury.

When diving for a loose puck, Izyk’s teammate Moore’s knee connected with the side of his head, leaving Izyk down on the ice for an extended period of time.

Trainer Tim Goldinger attended to Izyk on the ice and he remained in the game, but was removed for further evaluation after the second period.

Playing on the top line with Brady Ferguson and Daniel Leavens, Graham has had plenty of chances, and he was relieved to finally get the first one.

“I had a lot of chances throughout the game, so I was pretty frustrated. To finally get it and get the monkey off the back, it felt good. I want to help the team win and obviously, we didn’t get the result we wanted, so it’s back to the drawing board.”

Included in those previous chances was a second-period penalty shot that could have tilted the game in the Colonials’ favor. But Canisius goaltender Charles Williams was up to the task.

“I [had a moved picked out ahead of time], but in hindsight I wish I did another move,” he said. “He made a nice save.”