With only one week left in the season, its time to look at who needs what to happen to earn a chance to play for the championship. Eight teams from each classification will make the playoffs. North Allegheny will attempt to defend their Class-3A Penguins Cup championship from 2019 after the 2020 finals were canceled due to the COVID-19 pandemic. Pine-Richland, reigning Class-2A champions, will look to unseat North Allegheny in their second season in Class-3A, after their first chance was cut short just before last year’s semifinals. Similarly, Montour will look to win the Class-2A Penguins Cup after becoming Class-1A champions in 2019. Ringgold tried to repeat their 2019 championship last season, but COVID-19 stopped them before Carrick had a chance to. Look for those two to clash in this year’s postseason.

Tiebreakers for all playoff races are as follows:

All playoff spots have been clinched in Class-3A.

Pine-Richland is locked into the No. 3 seed. 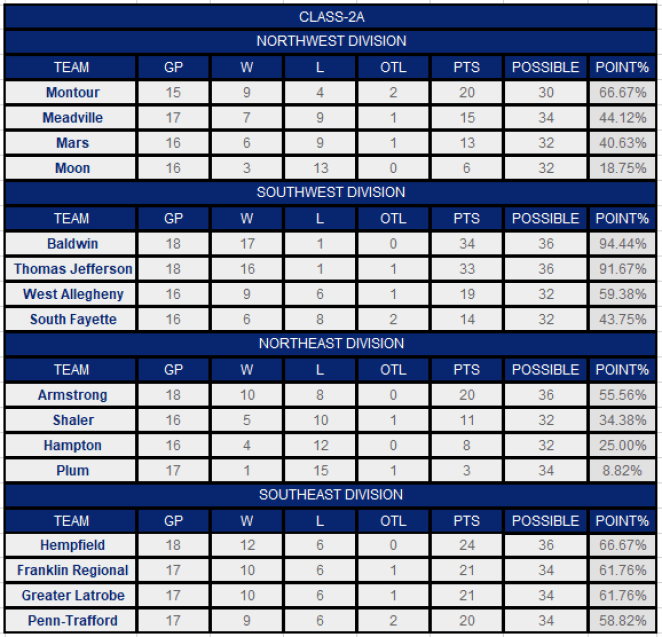 Baldwin will be the No. 1 seed by virtue of the highest points percentage of the four division champions at 94.44 percent. Montour and Hempfield are tied at 66.67 percent, however Montour has three games left to play. The Spartans need at least two wins and an overtime loss to earn the No. 2 seed. Hempfield owns the head-to-head tiebreaker by virtue of their 10-1 win over Montour on Feb. 22. Armstrong will be seeded No. 4.

The next four seeds will be the best four non-division champions by points percentage. Thomas Jefferson is locked into the No. 5 seed.

Currently, Franklin Regional and Greater Latrobe would earn the No. 6 and No. 7 seeds, each having a points percentage of 61.76 percent. Each club has one game left to play. West Allegheny would earn the No. 8 seed at 59.38 percent.

CURRENT PLAYOFF MATCHUPS:
No. 1 Baldwin vs. No. 8 West Allegheny
No. 4 Armstrong vs. No. 5 Thomas Jefferson
No. 2 Hempfield vs. No. 7 Greater Latrobe
No. 3 Montour vs. No. 6 Franklin Regional 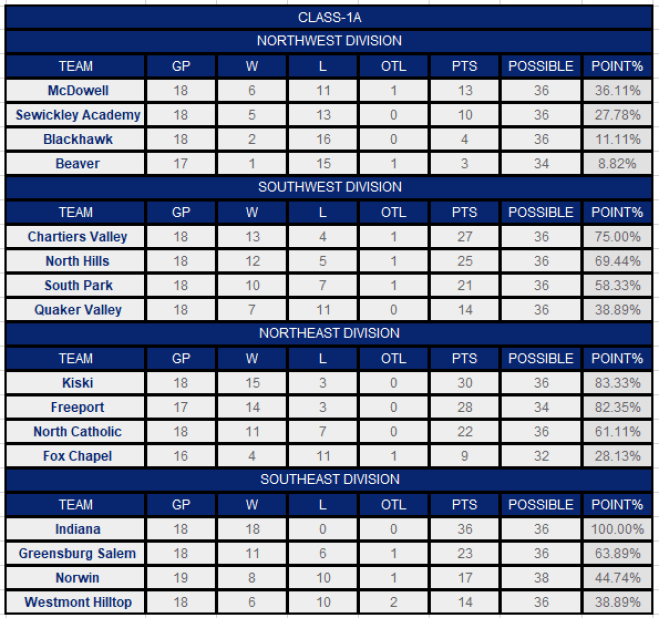 Kiski can clinch the Northeast division and the No. 2 seed with a Freeport loss in any fashion. Freeport can clinch the division and the No. 2 seed with a win – but only if they take no penalties during the game. The Yellowjackets hold a slim advantage in penalty minutes, 138 to 140. A Freeport win and two penalty minutes would result in a coin flip to determine the division winner. The loser of the division would earn the No. 5 seed as the best non-division champion by points percentage.

North Hills, Greensburg Salem, and North Catholic are locked into the No. 6, No. 7, and No. 8 seeds, respectively. 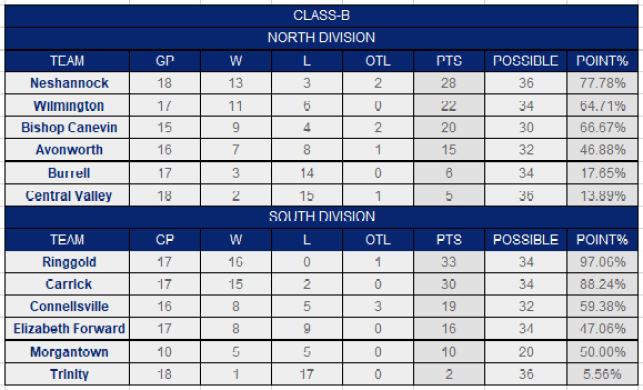 Ringgold and Carrick have clinched the No. 1 and No. 2 seeds, respectively. Connellsville can clinch the No. 3 seed with a win.

CURRENT PLAYOFF MATCHUPS:
No. 1N Neshannock vs. No. 4S Morgantown
No. 1S Ringgold vs. No. 4N Avonworth
No. 2N Wilmington vs. No. 3S Connellsville
No. 2S Carrick vs. No. 3N Bishop Canevin