Upon rejoining the PHD team after participating in the site’s launch over three years ago, I decided to take the opportunity to talk with people I know, and some I don’t, who have been a part of the #BurghHockey community and see where it leads me.

After all, was it not one of our generation’s greatest entrepreneurs and aspiring hockey stars, Michael Scott, who said that we miss 100 percent of the shots we don’t take? (Okay, Gretzky said it first–like, 99 percent sure–but I digress.)

As media relations assistant to the Robert Morris University women’s hockey team, and in the time that followed, junior defender Emily Curlett has become one of my favorite student-athletes to work with, and one of my favorite friends. This is evidenced, in part, by her Christmas card, signed by the whole team, which I have kept on my person since receipt.

On Feb. 8, in a 2-2 tie at College Hockey America rival Penn State, “Curly” scored a power play goal that gave her 35 career tallies, surpassing Class of ’19 teammate Kirsten Welsh for the most by a defender in program history. Entering the holiday weekend, she had the third-best points-per-game mark (1.07) among all Division I blue-liners in 2019-20, coming from 15 goals and 15 assists. She is also the reigning NCAA shot-blocking champ and earned a spot on the CHA All-Academic Team while pursuing her degree in Organizational Leadership.

On Jan. 16 Curly helped organize the second annual Never Give Up Radio Mental Health Awareness Panel Discussion at RMU’s Yorktown Hall, just down the road from the university’s Moon Township campus, in one of her off-ice roles, that of NGU brand ambassador. NGU is a non-profit organization and eponymous mental health awareness podcast co-created by Liam Cavanagh, Director of Hockey Operations for the women’s program at Robert Morris. Additionally, she has served as treasurer for the university’s chapter of Hope Happens Here, another mental heath awareness organization geared toward student-athletes, so after I reported on the event, I thought they might appreciate hearing her remarks in their full tapestry.

We talked about how embracing mental health awareness has been good for her developmentally. I’ve conversed with her a number of times, but this conversation was special to me because, while it was taking place, I took a risk I normally wouldn’t. In addition to getting her to open up, I opened up about my own struggles with mental health, and how they have impacted me professionally. She and I have learned that part of making progress is resigning yourself to the fact that we all have a unique story to tell, even if you’re afraid your story is “silly,” “weird” or otherwise embarrassing, and that you’re as human as the person sitting next to you–and vice versa. I’ve lived in that fear, and perhaps it was a fitting end to the evening that I was able to share it with a friend. 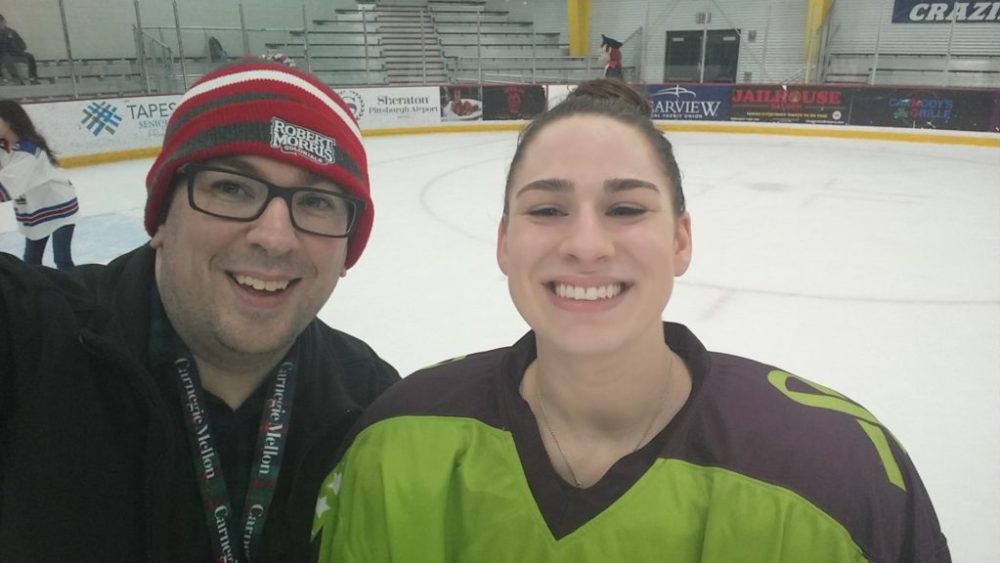 The next night, after the Colonials beat Syracuse in their Mental Health Awareness game at the RMU Island Sports Center, Curly was nice enough to join me for another one of my favorite team activities: “Skate with the Colonials” night. Finally, much to my excitement, I got to ice skate for the first time as a living, breathing organism on this planet.

After sharing that experience with the two-time All-CHA honoree (who attests I did a damn fine job on skates that likely hadn’t been sharpened since the Nate Handrahan era) and her equally kind mother, Sherry, who attends games regularly, I have a brand new appreciation for why young women like Curly probably couldn’t wait to do it again after the first time they skated.

Anyway, I hope you enjoy our conversation, and that you’ll be as impressed with Curly’s maturity as I continue to be every day.

Once again, this year’s featured panelist at the NGU roundtable was retired NHL-er, former Pittsburgh Penguins forward and 2009 Stanley Cup champion Tyler Kennedy. Funny enough, I got to reintroduce myself to “TK” well in advance of this year’s panel event, at a public appearance for a local grocery chain, so I knew he was plenty keyed up to put his head together with Liam’s and speak to the RMU student body again.

I’ve bled Black and Gold since the tender age of five, and any time I can speak with someone who played for and won championships with the team I grew up rooting for, and still do, ardently, to this day, it’s a thrill. And when that player shares a lesser known side of himself that makes him more relatable, so much the better.

I vividly recall the 2009 Stanley Cup Final between Kennedy’s Penguins and the Detroit Red Wings. To win championships, you need something called role players: guys who constantly bring energy, grit and a proper work ethic, but also, on occasion, make big plays in big moments. Tyler, who scored 215 points (89 goals, 126 assists) and 27 playoff points (12 G, 15 A) in nine seasons with four different organizations (Penguins, Sharks, Islanders, Devils), thrived as a role player in the NHL. Who among us Pens fans could forget him scoring the goal that forced Game 7 in the third period of Game 6 at the fabled Civic (Mellon) Arena?

I also vividly recall Tyler leading off the first mental health awareness discussion that Liam staged a year ago by recalling his success as a fighter, and how he believes he won most of his fights in the NHL because he was “scared s***less.” That night, Tyler had to leave early for other commitments, so I couldn’t possibly pass up the chance to pick his brain the second time around.

As a grown, and still growing, media professional, I’ve always tried to view athletes as people, not just the glorified entertainers as which they present themselves. Knowing they’ve faced inner demons, just like I have, to get to where they are today makes my efforts easier. His stories about overcoming his fear of insomnia, and overcoming the external pressure he felt to perform at the NHL level, with the help of Dr. Aimee Kimball, a player development consultant who worked in the Penguins organization at the time, are eye-openers.

Tyler and I discussed how he’s passed on his accumulated mental health wisdom to the next generation in his role as a youth instructor, first in the Penguins organization, and later, while working independently. I also got to ask him about calling his dad from center ice after the Penguins won the Cup in Detroit.

You’ll notice rather easily that, in the middle of our conversation, I was so into what Tyler had to say that I blanked on that question before arriving at it. Soon, I came to the conclusion that posting my gaffe would be therapeutic. Again, in keeping with the theme of mental health awareness, I thought it best for all to see that, no matter how seasoned I am, I am still as human as my interviewee, as well as my audience.

Nevertheless, it’s a tremendous honor to speak with a Penguin alumnus, under any circumstances, and I really think my excitement is reflected in this brief post-panel chat with TK.