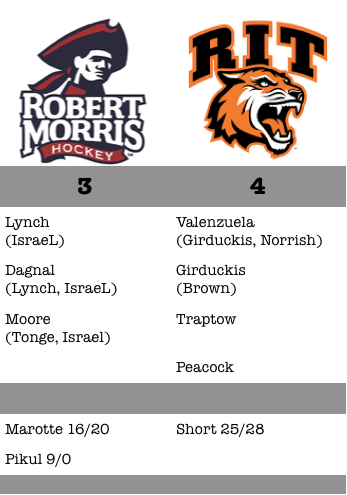 NEVILLE TWP., Pa. — The Robert Morris Colonials were in early control of the first game of their weekend series with RIT until the Tigers turned on the afterburner in a three-goal second period that helped push them to a 4-3 victory at RMU Island Sports Center on Friday night.

Paced by goals from Gabe Valenzuela, Abbott Girduckis and Bryson Traptow, the Tigers never looked back after assuming the lead, looking every bit the perpetual contender they have been over the years in Atlantic Hockey.

For the Colonials, it was a night where an inconsistent level of effort proved to be costly as the second period letdown would been too much to overcome.

“We played 20 minutes tonight,” Robert Morris head coach Derek Schooley said. “We were average to below average in the first period tonight and in the second period we just couldn’t defend. We were soft. Soft on pucks, soft on bodies, we couldn’t pick up our man.  It was men against boys in the second period. In the third period, we turned the tables and started winning battles and races and when you win those you’re going to have the puck more than they will. We had chances in the third period but it was too little, too late and we ran out of time. They were pitching and we were catching tonight.”

It took the Tigers just 18 shots to find the back of the net three times as they seemingly made every golden scoring opportunity count while finding a way to limit a Robert Morris attack that had been producing offense at a good level in recent weeks.

Part of the recipe included starting goaltender Christian Short, who stopped some early chances to keep his team in the game with key saves. At the same time, the Tiger defense turned in a solid performance with an array of blocked shots and tipped passes as they kept the Colonials from getting sustained pressure. The Tigers also threw in a good deal of hustle and desperation as they won loose puck battles and played with determination in the first 40 minutes of play.

Luke Lynch got the scoring underway when he took the puck from the right wing boards straight to the net and past Short at 17:47 of the first period. The next Robert Morris goal would not come for quite some time as RIT brought more intensity to their game, and got rewarded as they were often in the right place at the right time. Valenzuela got the Tigers off and running as he put the moves on and beat Francis Marotte at 4:41 of the second period to knot the score. Girduckis and Traptow then talled nearly four minutes apart in the second half of the frame to give the Tigers the momentum headed into the third period.

Robert Morris won the final twenty minutes of hockey and it was almost enough to force overtime as a short side goal shot from Alex Dagnal and a goal from Timmy Moore pulled the Colonials to within a goal.

“It’s a tough loss,” Dagnal said. “I think the first two periods we could have done a lot better just being harder on the puck and harder to play against and just doing the simple things better to put ourselves in better position to win the game. In the third period, we came out and did what we needed to do to give ourselves a chance but it was too little, too late. We need to come with hunger and build off this third period and keep that momentum going right into the first period tomorrow.”

Despite being outshot 11-9 for the period, RMU was the more desperate side and had it not been for more key saves from Short and some puck luck on some close scoring chances, the effort would have made the difference.  On Saturday night, the Colonials will need an effort closer to sixty minutes to even the two game series and stay near the top of the Atlantic Hockey standings. The two teams face off at 7:05 pm at the Island Sports Center.