Spencer Dorowicz wins a faceoff against RIT in 2016. -- BRIAN MITCHELL

If the success that Robert Morris has had this season could be traced to a single point, October 8, 2016 might make the most sense.

That night, the young Colonials, complete with 10 freshman and two upperclassmen that had essentially no playing experience, went into Rochester’s Polisseni Center and proved something. In perhaps the hardest place to play in the Atlantic Hockey Conference, playing against the defending AHC tournament champion RIT Tigers, the Colonials dug themselves out of a four-goal deficit midway through the second period en route to a 6-5 win.

It was a show of resiliency from a young team and perhaps it indicated at an early stage just what this version of the Colonials was capable of. As the season rolls into February, references to the youth of this Robert Morris team seem less and less appropriate. It’s been merged into a cohesive unit, much to the delight of its head coach.

“We’ve played 26 games so far so I don’t consider us a young team anymore,” Derek Schooley said this week as the Colonials prepare to face that same Tigers squad for the first time since early October.

“We expected to work our way through the season and to have 15 wins at this point is pretty impressive from this group of kids, this has been a special year already and we still have a lot of hockey to play,” Schooley added.

Now, the team it happened against is coming to 84 Lumber Arena in circumstances few would have predicted. RIT was the preseason pick to win the championship again this season but a number of reasons — the greatest of those being some devastating injuries — have conspired against the team. It’s put them in an unfamiliar spot, as they’re currently tied for sixth in the standings with several other teams.

The Colonials have an opportunity this Friday and Saturday to put the Tigers even further in the hole if they can come out with a three- or four-point weekend with precious few games left before the playoffs begin.

“Obviously we don’t know who’s going to be in and out of the lineup due to injuries, but they’ve won the last two playoff championships while we won the last two regular season championships,” Schooley said. “They were picked to be the preseason number one and that’s for a reason. They’re a good hockey team, they’re well coached and I’m sure they’re going to do whatever they need to do to be ready for this weekend. You can never underestimate RIT at any time of year. They’re a quality program.”

To keep the momentum from last weekend going, the Colonials will need to take their game to yet another level as the scoring comes down, the room on the ice shrinks, and the battles become just a little more fierce. 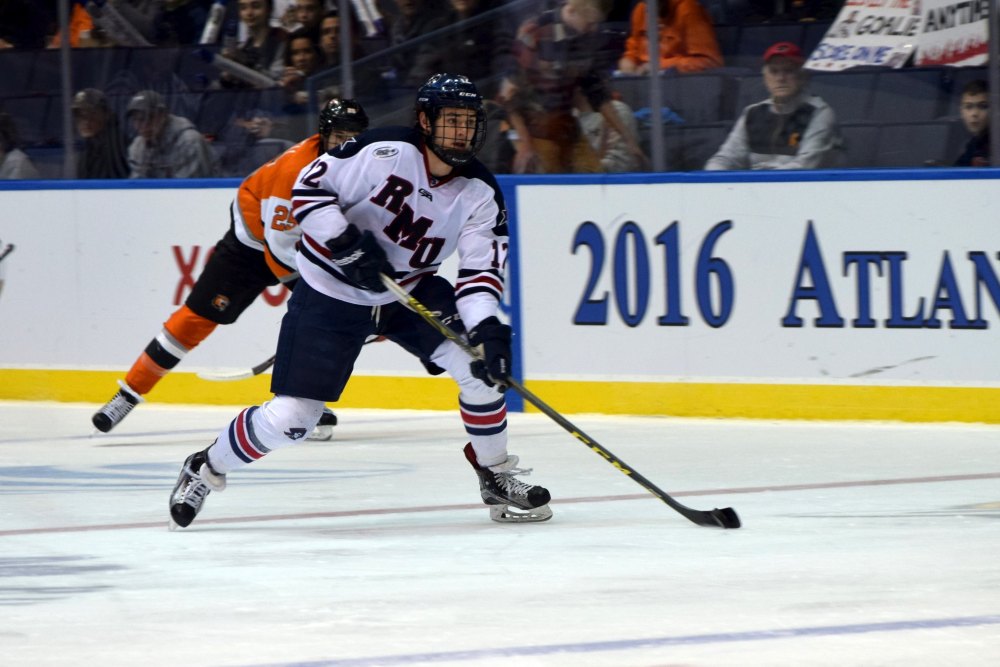 RMU: Leading scorer Brady Ferguson’s six-point weekend at Holy Cross put him over 100 points for his career and puts him on pace for more than a 50-point plus season while linemates Daniel Leavens and Alex Tonge both enjoyed multi-point weekends themselves.

Elsewhere, junior Timmy Moore continues a successful year that has now seen him put 12 pucks in the net following his three-goal weekend. Moore has played hard week in and week out but has learned to play smarter as the season has gone along.

RIT: Sophomore Erik Brown has taken a step forward from his promising freshman season to lead the team in scoring with 14 goals and 23 points so far while forwards Caleb Cameron, Myles Powell and Gabe Valenzuela help balance out the top end of the scoring. The Norrish twins — Brady and Chase — may or may not be in the lineup this weekend for the Tigers, leaving their back line potentially without two very good defensemen. Keep an eye on freshman defenseman Adam Brubaker, who leads the defense with five goals and 17 points on the season so far.

RMU: The Colonials earned the weekend split at Holy Cross falling by a 4-3 score after falling behind 4-0 early on Friday and winning 6-0 on Saturday. It was a weekend that saw the team play very well for long stretches in a hard venue to earn points over the years.

“When you chase the game you put yourself at risk,” Schooley said of his team’s Friday night setback. “We made a comeback and we played pretty well, we just couldn’t get the equalizer. Then on Saturday night, we didn’t want to put it to chance late in the game. We got a couple of early goals, we were moving well and playing hard and we were doing everything the right way and we put them back on their heels. Then, with 44 minutes left to play and a 6-0 lead, you have to make sure that you play the game the right way and finish it and for the most part we did.”

RIT: The Tigers were swept at home by Bentley, losing 3-2 on Friday and 6-3 on Saturday.

RMU: If the hot hand rolls for the Colonials, then senior Dalton Izyk (1-2-0, 3.15 goals-against average, .904 save percentage) should see some playing time this weekend. Since coming back from an injury in November, Izyk has shown no ill effects as demonstrated in 90 minutes of shutout hockey last weekend and has played in big games on big stages throughout his career at RMU. Third goaltender Andrew Pikul left Friday’s game at Holy Cross with a lower-body injury and will not be available this weekend.

RIT: For the Tigers, senior Mike Rotolo (10-15-1, 2.79 GAA, .891 save percentage) has played in all but one game so far this year, and while his performance has been up and down so far, he’s delivered some of the best netminding of his career when the Tigers have needed it most. With RIT in desperate need of points, look for him to be at his best and don’t let his numbers fool you.

What to Watch For

At Stake: The easy answer is playoff positioning, but this weekend, it’s a bit deeper. The Colonials are in the middle of a push for home ice and a bye in the first round as they’re part of a five-team logjam at the top of the standings with just three-point cushion on a group of three teams that includes RIT. There’s also some less analytical capital at stake.

“It’s been a little rivalry since I’ve been here,” Ferguson said. “I don’t think they like us. We don’t really like them. They’re a really good hockey team, so we just have to come ready to play.”

All Time: The Colonials lead the all-time series with a record of 11-8-4, including a split with RIT on the road in October.

Bold Prediction: RIT is a potentially dangerous team to play coming into the weekend. They’re getting desperate, the season is winding down and they need points very badly given their situation in the standings. There’s nothing that says they still can’t get it together and start some momentum rolling before the playoffs. In fact it’s rather likely, it’s just a question of when.

It’s probably not this weekend, even though I could see them winning a game here, but I say the Colonials get two hard fought wins in close games this weekend. The scoring is coming from more and more sources, the defense has emerged as a strength, the goaltending is deeper, they’re healthy and have been gaining more confidence by the week.