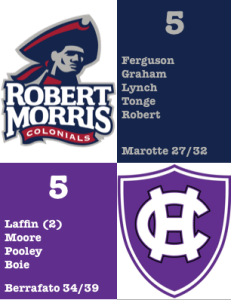 NEVILLE TWP., Pa. — It’s been a tough start to the 2017-18 campaign for Robert Morris. The Colonials have had a string of close losses, with goals against coming late in the game several times as they started the year with a 2-5 record.

The suffered a similar fate on Friday, as they allowed Holy Cross to score with 2:25 remaining in regulation as the Crusaders came back for a 5-5 tie.

But there was something different to this one. Yes, the Colonials earned a critical point in conference play. But not only that, they made strides forward in several areas that have been lacking thus far this season.

The Colonials got goals from junior Alex Tonge and sophomore Matthew Graham, a couple of high-skill wingers that they have been counting on for offensive production, but possessed just three goals between them in the first seven games.

Graham’s was one of two power play goals for the Colonials, buoying a unit that has struggled in the early going this season. They came into the game connecting at just a 15.2 percent clip with the man-advantage, but ended up scoring on 2 of 6 opportunities, and nearly connected again on their final power play, earned with under 30 seconds left in overtime.

“As a group, we just know where we’re going to be,” said senior forward Brady Ferguson, who had the first power play goal to open the scoring int he first. “We moved the puck well. We just did simple things and we just ended up scoring.”

On the blue line, the Colonials were unsatisfied with the five goals against, but also got productive games from Alex Robert, who scored his first collegiate goal and Eric Israel, who had a pair of assists.

The Robert Morris offense, one of the most potent in all of college hockey over the last few years, has been mostly bottled up this season, but they showed some positive signs with five goals on Friday.

“We’ve been getting our chances, we’re just not getting the bounces,” Tonge said. “It’s a step in the right direction. If we can get one point, that’s good, but we want two.”

Sophomore forward Jacob Coleman was moved up to the first line for the game, as head coach Derek Schooley shuffled the lines in an effort to get his Top Nine all rolling at the same time. Coleman didn’t score, but he made a beautiful play to set up Tonge and he fit right in alongside Tonge and Ferguson on the top unit.

“He’s a really easy player to play with,” Tonge said. “He made a great play and I just tried to put it on net.”

With Coleman on the top line, that put leading goal scorer Luke Lynch on the second line with Daniel Mantenuto and Timmy Moore and Graham with Spencer Dorowicz and Michael Louria on the third unit. All three units came away with a goal scored on Friday, giving Robert Morris some of the balance they’ve been looking for.

One thing that has been a consistent for the Colonials has been the effort and energy they’ve played with, whether they’ve been ahead or behind this season. That was the case on Friday, as they came back from a 4-2 deficit to tie the game and take the lead late in the third.

“I guess that’s the one good thing that you could take out of this game is that we came back when we were down two goals,” Ferguson said. “A point is nice. It was nice coming back. We just need to learn to hold a lead.”

But they may have taken the energy level a bit too far late in the third, as senior defenseman Elias Ghantous took a boarding penalty with 4:01 to go in the game and Holy Cross tied it on the ensuing power play.

The let-down on defense has been a consistent one for Robert Morris, which came into the season allowing 3.4 goals per game and saw that figure rise over the course of the evening.

“You have to keep the puck out of the back of the net to win,” Tonge said. “I think we’ve got to help our goaltender out and play a little bit better on D to win these games.”

But it wasn’t necessarily a bunch of odd-man rushes against. As was the case a week ago against Ohio State, Robert Morris seemed to have trouble marking men down low in the defensive zone.

“We’ve just got to pick up guys and play man-on-man,” Robert said. “It’s one-on-one battles all over the ice. We’ve just really got to clean that up. … It’s hard to come out of that with a tie.”

It’s been that kind of start to the season for Robert Morris, as they have dealt with inconsistent play from several units at different times of the young season.

“They were trying to get people away from our coverage, trying to throw pucks and get some rebounds,” Schooley said. “We just have to be better. We haven’t had everybody going and playing their best at one time yet. A step in the right direction, yes, but still some things we’ve got to tighten up.”

Photo-Jenn-ic: Colonials and Crusaders finish in a Tie