Coach Paul Colontino walks by as the Colonials celebrate the sweep of Mercyhurst Oct. 29 -- BRIAN MITCHELL

As the calendar is set to refresh to a brand-new year, the 2016-17 Robert Morris women’s hockey team can look back at what they’ve accomplished in 2016 and hold their heads high.

With a mark of 12-1-5, they are ranked No. 9x in the nation in both major polls while leading the College Hockey America conference by five points. There are only two teams — Robert Morris and St. Lawrence — with one loss on the season and the Colonials are the only team in the nation that is undefeated in regulation.

The hot start has the Colonials set up well to compete for a CHA title in 2017, but it was nearly a year ago that the seeds of that success were planted.

In early March, the Colonials took the ice for a bitterly cold afternoon at Buffalo’s HarborCenter, where they were defeated by rival Mercyhurst in a game in which they were competitive, but still looked like they were just far enough away to not warrant serious consideration as contenders.

As they said goodbye to three seniors over the summer, they were left with an identity of a young and hungry squad. By training camp, head coach Paul Colontino added four first-year forwards that would solidify that identity: Jaycee Gebhard, Aneta Ledlova, Emma Low-A-Chee and Natalie Marcuzzi.

The four first-year players came in with a ton of big-game experience. Gebhard was the Junior Women’s Hockey League player of the year for the Notre Dame Hounds in 2014. Low-A-Chee came off of a championship year where she scored the game-winner for the Toronto Aeros over Marcuzzi’s Mississauga Chiefs. Ledlova won the MVP in the U18 National tournament for the Czech Republic. 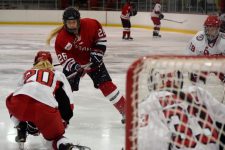 The big-game experience learned by the returning players in the previous postseason combined with that of the newcomers has helped the team play with a killer instinct that has allowed them to escape many close games with last-minute goals.

The fact that they haven’t lost in regulation is impressive considering the number of low-scoring, close games they’ve been involved in. Twelve of their first thirteen games were decided by one goal or fewer, including the only blemish on the record, a 4-3 overtime loss to Merrimack on Oct. 21. 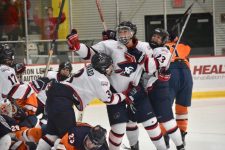 The inability to lose in regulation stems from a couple of marquee moments for the team, including Maeve Garvey’s tally with 50 seconds left in the opening contest with Providence on Oct. 1, and sophomore defender Kirsten Welsh’s goal with nine seconds remaining in regulation to forge a tie against Syracuse on Nov. 4. For players and fans alike, it has lead to some very meaningful and interesting hockey.

That was on full display in the team’s matchup with then-No. 5 Clarkson in the first game of the Windjammer tournament in Burlington, Vermont over the Thanksgiving holiday. The Colonials were down big early, but continued to show the ability to come back in games, with Welsh scoring two power-play goals and setting up Howard’s buzzer-beater in the second period, while scoring the game-tying goal with 31 seconds left in the third.

When the second half resumes, the Colonials will play their final non-conference opponent in Brown at the 84 Lumber Arena on Dec. 30 and 31. They will close the season with 14 games in the CHA, where they are 7-0-1 so far this season. 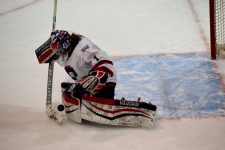 The line of Howard (29 points), Rennie (19 points), and Gebhard (23 points) has paced Robert Morris all season. Howard sits in fourth in the NCAA in total points scored, while Gebhard leads the NCAA in power-play goals with six and sits tenth in overall goals.

Goaltenders Lauren Bailey and Jessica Dodds have split time evenly thus far. Bailey, a sophomore, sports a 7-1-1 record with a .913 save percentage, while the senior Dodds checks in at 5-0-4 with a .931 save percentage.