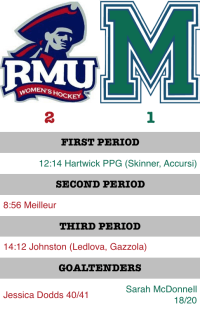 NEVILLE TWP. — The Robert Morris women’s hockey team came into their weekend series with Mercyhurst sporting the country’s leading scorers in Brittany Howard and Jaycee Gebhard, whose 18 points were tops in the country.

The Lakers shut down the Colonials’ top line, holding them off the board completely, but RMU got some key secondary scoring and was able to prevail with a second straight 2-1 victory Saturday afternoon.

Friday, it was Aneta Ledlova and defender Kirsten Welch lighting the lamp. Saturday, Rikki Meilleur and Mackenzie Johnston came through for a goal each.

“We have been hemmed up a little bit with our second, third and fourth lines. This weekend, that’s where we got all our goals. It’s crazy,” said head coach Paul Colontino. “A lot of times, that’s how big games are. You look at the Penguins’ Stanley Cup run, it wasn’t necessarily Sidney Crosby with the big goal. It was Bryan Rust or someone like that. If you had told me on Thursday, [the top line wouldn’t score], I’d have said we’d have our work cut out for us. But sure enough, they found a way. That’s exciting.”

Getting scoring from the other three lines is key for the Colonials as they move through conference play, where teams are more likely to game plan to take away a hot unit.

“Everybody knows each other pretty well and you can get on a well pretty easily. You can match up, if that’s your thing,” Colontino said. “The supplemental scoring is huge.”

“We love that our first line has had an amazing start to the year and they’re still doing amazing on the ice, but it’s nice to get some scoring from some other lines,” captain Rikki Meilleur said. “Sometimes, they won’t be able to score and we need to. … I feel like other teams are picking up that they’re scoring a lot of our goals, so it’s finally nice to get some other lines scoring some goals and put other teams on their heels.”

Johnston’s third-period game-winning goal came on a 2-on-1 with Ledlova. But before the puck even came to Johnston’s stick, a portion of the crowd started screaming. When Johnson’s shot streaked past Mercyhurst goaltender Jessica Convery, they went berserk, chanting Johnson’s name.

It was, of course, a big goal against a conference rival, but the crowd’s reaction was fueled by the fact that the girls of the Barrie Sharks were in attendance. The Sharks are coached by Johnson’s father Greg, who was an NHL defenseman. So with her father in the stands and a rowdy crowd cheering her on, was there any additional pressure on Johnston to bury the prime scoring chance? Not quite.

“It just happened so fast,” Johnston recalled. “Jess [Gazzola] made a great play. [Ledlova] hit me with a pass, I shot it hard and all of a sudden, we’re cheering in a group. It was very fast. … It was pretty nice.”

Lauren Bailey and Jessica Dodds — Robert Morris’ two talented goaltender — may as well be playing a game of “Anything you can do, I can do better.”

After Bailey’s 30-save performance Friday, her save percentage climbed to .922 on the season — just a hair ahead of Dodd’s .920 mark. Not to be outdone, Dodds stopped 40 of 41 on Saturday to bring the goaltenders to a dead heat. 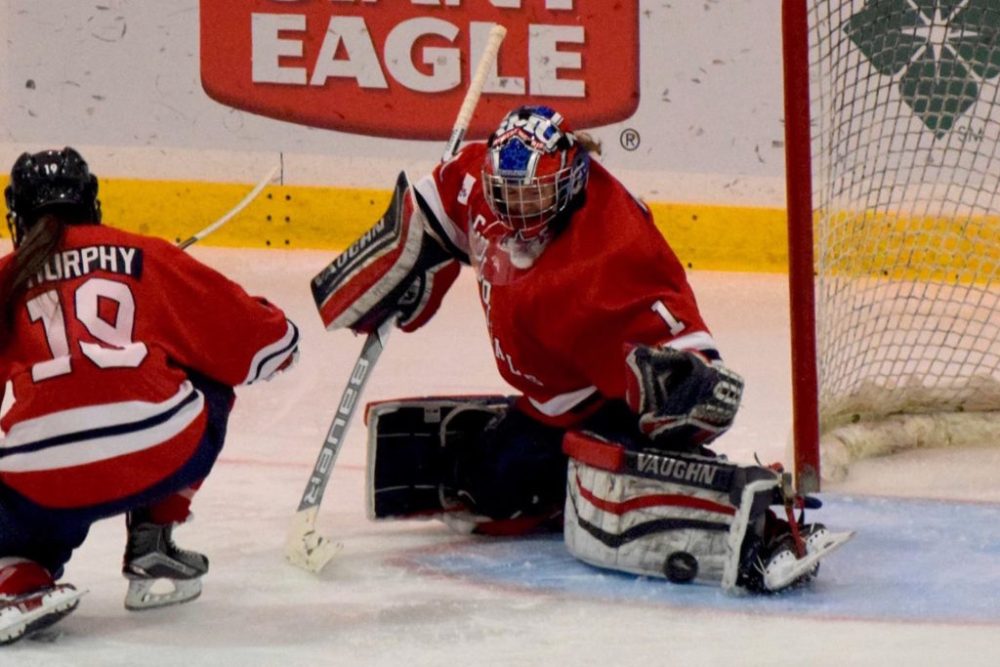 Jessica Dodds stretches to make a left pad save against Mercyhurst. — BRIAN MITCHELL

If anything, the senior Dodds has had the tougher job, backstopping the second game of the weekends. With tired legs, the sometimes sloppy games can lull a goaltender to sleep.

“It’s actually been really good,” Dodds said. “I love playing when it’s challenging. It seems like on the second day, they have a little bit more knowledge about us and how we play and they’ve kind of structured their game to ours. So, it’s a little interesting because I think you see a true matchup on a Saturday.”

On any team with two solid goaltenders and one net, there can be a bit of contention as to which should secure the lion’s share of the playing time. But the team is taking a page from the men’s team a year ago, which rotated Dalton Izyk and Terry Shafer in net until Izyk went down with an injury late in the season.

“It’s worked out really well,” Dodds said. “Me and Bails keep challenging each other in practice every week. This weekend was probably the biggest it’s shown. We’re both challenging each other for playing time. It’s actually working out well. The men’s team last year rolled with two goalies that were playing one game each and it worked out well for them so hopefully, we can have the same success.”

RMU’s first goal came on the simplest of plays. On a two-on-two, Meilleur just sent the puck towards the crease with Gazzola driving to the net. It hit something — neither player is sure what — and slid into the net for a goal. It took a second for the players to react to such an innocent-looking play going in.

“I was just more worried about getting the puck to the net,” Meilleur said. “I saw [Gazzola] driving to the net. I tried to get her the puck. On the bench, we thought it was her goal, but who cares, it’s a goal. That’s what we needed and that’s all we cared about.”

The simple play — a delay by Meilleur and a drive by Gazzola — is something that the Colonials can use to generate scoring, even when they aren’t dominating possession. The Lakers out-attempted RMU 78-43.

“On a 2-on-2, we couldn’t ask for a better play,” Colontino said. “Drive the net, get the puck there and see what happens. … It goes in, right off the hop. We’ll take that. Simple goals.”

RMU faces another home conference challenge next weekend as the Syracuse Orange will visit 84 Lumber Arena. Syracuse is 2-0 in the conference after sweeping Lindenwood and is 2-4-2 overall.