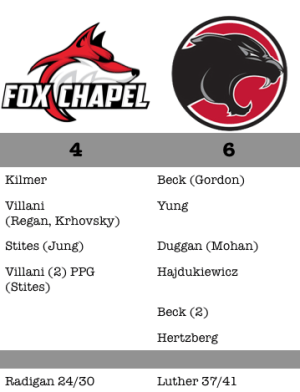 NEVILLE TWP., Pa. — Sewickley Academy got two goals from Andrew Beck and 37 saves from Cole Luther to ouefeat Fox Chapel 6-4 in the first round of the Single-A bracket.

The first period began with Fox Chapel controlling the play and getting a few good chances, but Cole Luther stood tall for Sewickley Academy. Michael Kilmer finally broke through for Fox Chapel as he pulled away on a breakaway. He was eventually pulled down but managed to score nonetheless. That score held until about midway through the second.

After a failed powerplay opportunity, Sewickley Academy started turning it on. They eventually got a 2-on-1 and Andrew Beck opted to shoot, a good decision as he beat goaltender Tyler Radigan. Sewickley Academy kept the pressure on and just about two minutes later Thomas Yung intercepted a failed clearing attempt and fired it home from the point. Fox Chapel wouldn’t go away quietly, as Chase Villani demonstrated a great indiviudal effort walking through the defense and scoring to tie the game at two heading into the third.

The third saw the fast-paced action continue, as the teams would score an additional six goals in the final 17 minutes. The team scored twice in 30 seconds including a nice breakaway goal by Matthew Hajdukiewics in the first 5 minutes of the period to take an early 4-2 lead. Fox Chapel answered on a beautiful shot by Sam Stites, who brought the puck around the net and into the slot before firing a backhand shot into the top corner.

With 3:29 left, Andrew Beck scored his second of the game, the game-winner with another snipe on a 2-on-1 which made it 5-3.  Fox Chapel’s Chase Villani scored his second of the night with his team’s goalie pulled to bring Fox Chapel within one with 1:08 remaining. However, Sewickley Academy’s Michael Hertzberg scored on a wraparound with 30 seconds to go, and the game would end with a final score of 6-4. 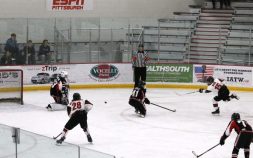 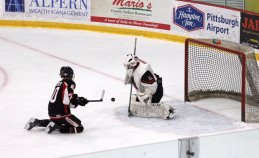 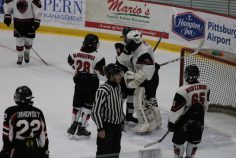 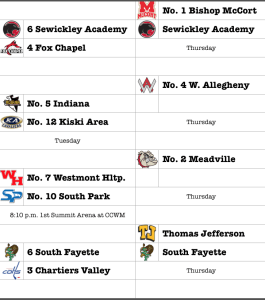 The Panthers will move on to face the top seed in PIHL’s class Single-A, the Bishop McCort Crushers. That quarterfinal game will be played on Thursday in Johnstown.

South Fayette also moved on earlier on Monday night in Single-A, with the game between Westmont Hilltop and South Park in Johnstown not yet final.

Indiana and Kiski Area will battle to face West Allegheny on Tuesday. All four quarterfinal games will be played on Thursday.