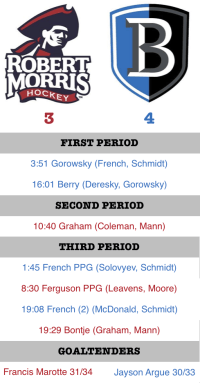 It’s about a 12-hour bus ride to Watertown, Massachusetts for the Robert Morris Colonials, and no matter how they try to break the trip up, it always seems to result in sluggish play by the time they take to the ice at the John A. Ryan Skating Arena, home of the Bentley Falcons.

When the Colonials last visited “The JAR” in 2013, Max French scored just seven minutes into the contest and it took RMU until the final minute of the game to finally find the back of the net.

Two of those trends continued on Friday, as the Falcons opened up an early lead and French was again a factor in Bentley’s 4-3 series-opening win.

The first period was all Bentley as the Falcons potted a pair of goals to take a commanding early lead while Jayson Argue kept the Colonials off the board.

The talented Robert Morris offense couldn’t be held down forever, though, and freshman Matthew Graham cut the lead in half in the second period.

But French was the difference-maker in the third as his pair of goals were the deciding factor in keeping RMU’s late comeback attempt from ultimately succeeding.

Brady Ferguson’s power play goal in the third period was assisted by Daniel Leavens, which extended both players’ scoring streaks to nine games.

Francis Marotte allowed three of the four Bentley goals, as the fourth was scored on an empty net.

The two teams will face off once again Saturday at 4:05 p.m.