Amber Rennie fights for a puck between two Syracuse defenders in the first period of the matchup with Syracuse. -- BRIAN MITCHELL 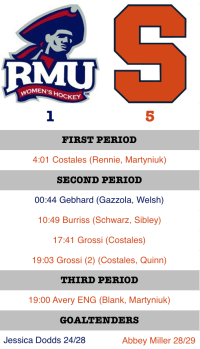 SYRACUSE, N.Y. —  The stakes were simple for the Robert Morris women when they faced the Syracuse Orange at Tennity Ice Pavilion on Saturday afternoon.

Thanks to Friday’s win, the Colonials had a four-point edge over the Orange in the College Hockey America standings. A win would put Robert Morris solidly in the driver’s seat for a regular-season conference title. A loss would bring Syracuse back to within two points and striking distance.

The Robert Morris women have enjoyed a very solid season thus far. Ranked No. 7 in the country, the team has proven to the rest of the NCAA that they are the real deal. But this loss did some damage when taken into the big picture of the season. Tournament season is coming up, and the Colonials didn’t just give ground back in Atlantic Hockey, the lost the precious Pairwise spot they had gained the day before, as well.

“It’s a wake up call,” head coach Paul Colontino said. “It’s going back to basics of realizing that we have to go back and play sixty minutes. We had some of those lapses that really cost us. You learn from it for sure, and you have to take the positives from it.”

“In the first period we came out a little soft.” Meilleur stated. “We were able to control the play in the third. Going forward we just have to know that no matter who the opponent is, we know that we can dominate- and we know what we bring to the table.

Jessica Dodds started her fifth consecutive game, and suffered her first defeat of the season, snapping a 14-game unbeaten streak. The senior now has a record of 9-1-5 on the season.

Robert Morris went 0 for 3 on the power play, including a 5-on-3 situation. Since the beginning of the 2017 calendar year, the Colonials have gone 5 for 47 on the power play, clicking at 10.6 percent. The team had a top-10 ranking at the midyear mark with the extra player, but now stands at 13th.

“We’re not getting some bounces, but to the same extent, I believe you work for your bounces,” Colontino said. “At the end of the day we’ve got to get a closer look at how our power play is going five-on-four, because at times, it’s looking like it’s turning into a four-on-four. If we work harder and a little more consistently, we’ll get a couple more breaks.”

Jaycee Gebhard leads the NCAA with seven power-play tallies, and the first-year forward is sneaking up on the Robert Morris record books in that category.

“We’ve been getting some chances, there have been some rebounds that we have to get to before the goalie smothers them or [the defenders] clear it out,” explained Gebhard. “We have good puck movement, but we have to do it with a little more speed. We can’t be complacent out there.”

The entire CHA conference will get next weekend off before the stretch run that will decide the tournament seedings. Robert Morris will host RIT and Penn State before closing their season on the road at Lindenwood.