The Colts started the contest matching the Indians stride-for-stride and hit-for-hit, but were unable to capitalize on any offensive possessions early while Indiana added shot after shot to their total. The two teams ended the first frame scoreless.

Wear and tear continued to build on Chartiers Valley, and the Indians Agnello capitalized, scoring three goals 5:35 apart in the second frame.

It was in the third period that the Colts mounted the comeback attempt, first a power-play goal from Greg Kraemer that ignited the Chartiers Valley attack, and then a breakaway goal by Jackson Fodor that brought the crowd to a roar at 11:43.

A late penalty by the Indians Zach Wood with Logan Marnik pulled set the stage for an electric finish that featured several blocks, shots and even an empty-net attempt that hit the inside of the post and bounced out, but in the end it was Indiana celebrating their first Penguins Cup.

Marnik had a stellar contest, and in the end stopped 48-of-51 in the loss for the Colts, while Seamus O’Connor stopped 12-of-14 for the Indians. 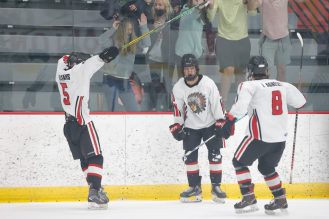 PERFECT IN THE WEST

The win was the 2oth on the COVID-19 staggered season in as many tries for Indiana, who move on to the State Finals to face the winner of West Chester-Henderson and West Chester-East- which will be played tomorrow evening.