Christian Short between the pipes for RIT. -- JENN HOFFMAN 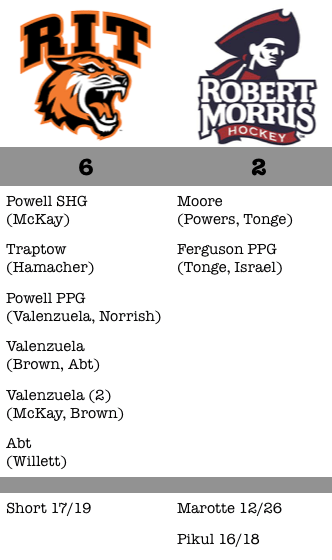 NEVILLE TWP., Pa — The RIT Tigers came hungry once again and for the second time this weekend took the play to the home standing Robert Morris Colonials as they completed their weekend and season sweep with a 6-2 victory on Saturday night at RMU Island Sports Center.

“We had a good start and then one wheel fell off the bus and we got it back on and then they kept falling off the bus,” Robert Morris head coach Derek Schooley said. “It’s unfortunate. We turned pucks over, we got beat, you could go down a list of things they did. They made it 5-2 and we took a too many men on the ice penalty and they score, we turn a puck over and they score and at the end of the second period, it’s four on four and they score and I think that really sucked the life out of us with that goal.”

The game bore a resemblance to Friday night’s contest, which saw the Colonials take an early lead and relinquish the advantage on both the scoreboard and also in terms of momentum.

Led by two goals apiece from Gabe Valenzuela and Myles Powell and strong special teams, the Tigers controlled all phases of the game. When they slipped on the rare occasion, Christian Short was able to come up with saves on shots that might have pulled the Colonials back into the game at key moments.

The win pulled the Tigers back into solid contention for home ice in the Atlantic Hockey playoffs, while hurting the Colonials’ chances at securing a first-round bye.

BRIGHT SPOTS FEW AND FAR BETWEEN

Robert Morris had some good jump early as Timmy Moore got the Colonials off and running just 3:32 into the first period to give his side a short-lived lead that Tiger forward Myles Powell erased over five minuets later with a short handed tally. Colonial hopes were raised when Brady Ferguson provided a quick response less than a minute later with a sharp angle shot that beat Short on the short side at the 9:34 mark of the first frame. With the goal, Ferguson tied Zac Lynch’s career scoring mark and for brief period of time, Robert Morris looked to be taking control of the balance of the period until Powell put his second puck past Francis Marotte with just 1:30 left to knot the score at two heading into the dressing room.

The Colonials spent large segments of the game serving time, supplying the Tigers with eight power play advantages, including four in the final twenty minutes which thwarted any hopes of a comeback attempt.

“We have to put this in our rear view mirror” Schooley said. “We don’t have enough time to sit and sulk about it and whine and complain. We’ve got to go and do things better next week. We’ve got a difficult Mercyhurst team followed by a red hot Air Force team so if we want to finish in the top four we’ve got to make sure that we take care of our business and put this behind us and focus and be determined.”

With the loss, the Colonials find themselves tied for third with the Mercyhurst Lakers in the Atlantic Hockey Standings, their opponent in a crucial home and home series commencing next Friday night.

“We have to come back Monday with a good week of practice and put it behind us,” Moore said. “We’ve already been through this stuff in October and November. We need to put 60 minutes together and play our way and if we do that I don’t think anyone can play with us.