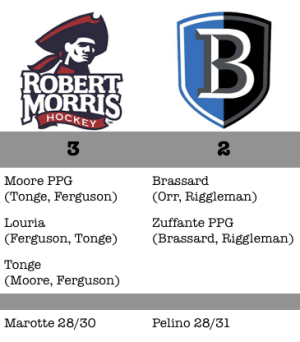 NEVILLE TWP, Pa. — With a sizable crowd on hand and a playoff atmosphere in the building, the Robert Morris Colonials managed to take a hard-fought 3-2 decision over the visiting Bentley Falcons thanks to a late third period goal from Michael Louria and a game winning tally from the red hot Alex Tonge.

“We’ve had a lot of games where we had the belief going into the third period and we hadn’t been rewarded,” Robert Morris head coach Derek Schooley said. “I don’t think we had our best game. That’s a game we play in November that we don’t win and the difference is the belief we have and we get that win in January. We didn’t want to come out with just one point when we got to overtime, we went after it.”

Following a physically intense first period that saw bodies tumbling to the ice on both sides, Bentley forward Connor Brassard opened the scoring after coming over the blue line with speed and unleashing a hard shot from the right circle that beat Colonials goaltender Francis Marotte at 8:26 of the second period.

Special teams would then play a pivotal role. Timmy Moore beat Falcons net minder Aiden Pelino at 10:53 of the second with a man advantage, but the Robert Morris lead was a short-lived situation as Michael Zuffante put Bentley ahead with power-play goal scored directly off a face off with less than 15 seconds to play in the period.

“Obviously to be down there in the last minute and score and get one in the first shift in overtime; it’s awesome and shows what this team is made of,” Moore said. “I think there were times where we let up and they kind of took the play to us. We need to keep focused on a full 60 minutes.”

Both Marotte and Pelino were at the top of their games throughout sixty minutes of hockey as both provided highlight reel moments. Marotte was particularly strong in the opening frame, stopping several premium chances, to keep the Falcons off the score sheet early on while Pelino robbed the Colonials with saves on two crucial power plays in the third period to preserve the lead for the Falcons.

Following a late Robert Morris power play in the third period that failed to produce a game-tying goal, the stage was set for a stunning final two minutes of the game as Louria took a feed from Brady Ferguson and pushed it past Pelino with 52 seconds left in regulation and Tonge added the game winner by sweeping the puck past Pelino from the slot with assists coming from line mates Moore and Ferguson just 27 seconds into the overtime period. It was another strong performance from Tonge who not only came through with the game winner, but also wreaked havoc with a clean, hard open ice hit in the first period while winning key 50/50 puck battles all night long.

“Something just clicked,” Tonge said in reference to his recent performance that has seen him return to his high scoring ways and tenacity away from the puck. “I don’t know if it was starting to play with these guys or if it was a mental thing but it’s definitely been going good for me lately and I’m going to try to keep it going through the rest of the season. We have to come out strong tomorrow. We went to Bentley earlier and they took four points from us so we have to do the exact same things to them.”

The win was a critical one for both the Colonials standing situation in Atlantic Hockey, and their confidence too which seems to be surging after a fifth win in their last six games.

“It’s definitely a huge win,” Louria said. “It definitely gives us a lot more confidence going in to tomorrow after a win than a loss where we could have bared down on some more chances. I think if  you look at us earlier in the year, maybe we just would have folded. I think it shows how far we’ve come in terms of closing games out and being hungry for that extra point. Everyone’s clicking right now and we just have to keep it going.”

The two teams square off Saturday night for another crucial Atlantic Hockey match up at 4:05 p.m. at RMU Island Sports Center.