Alex Tonge sets up for a shot in the second period. -- BRIAN MITCHELL / PITTSBURGH HOCKEY DIGEST 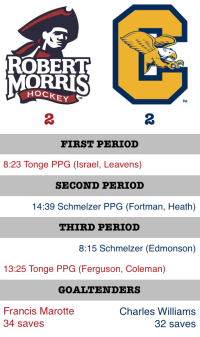 BUFFALO, N.Y. — Coming off a loss in which they allowed five power-play goals, Robert Morris set out to win the special teams battle in their rematch with the Canisius Golden Griffins Saturday night.

The Colonials got a big improvement out of their penalty kill unit, which stopped five of six Canisius power plays, and the Colonials added a pair of power-play goals of their own to secure a 2-2 draw.

“We won the special teams battle tonight which was one of our goals,” head coach Derek Schooley said. “We talked a lot to the penalty kill about being more aggressive and taking away time and space. I though the penalty kill was so much better tonight. The power play came through in a key situation when we were trailing by one.”

Alex Tonge did all of the scoring for the Colonials. He took a first-period shot that went off the post behind Canisius goaltender Charles Williams but still ricocheted into the net, and then fired a one-timer past Williams in the third period to bring the Colonials to even.

Tonge’s second goal came after Canisius forward Ryan Schmelzer was ejected for a hit to the head of Colonials forward Daniel Leavens. Robert Morris was awarded a two-man advantage and immediately took advantage.

“[Tonge] got us the first one. I would have liked to see us capitalize on the five-minute major, but you can’t be greedy,” Schooley said. “We need him to score goals. He was brought here to score goals. I thought he played harder tonight than he did last night. That’s one of the things he has to make sure he does. He did play harder and to get rewarded by that — that’s a good thing. He did a good job tonight.”

With Robert Morris losing five forwards from the 2015-16 team, Tonge, a sophomore, is being asked to step into a much larger role on the man-advantage unit. So far, he’s taken to it pretty nicely.

“I had a lot of pressure [to score] in junior. I like stepping into a big role and having a little bit of pressure. I’m enjoying myself right now,” Tonge said. “This year, I definitely have a bigger role on the power play. We lost a lot of scoring up there, so they need me to score and I think our power play is clicking right now. It’s going well.”

All four of Tonge’s goals have come on the power play, and the unit is now clicking at a 30.8 percent rate on the season.

Tonge thinks that the power play can be a strength of the young team and that they’ve shown their resiliency with two come-from-behind performances in the second night of back-to-backs already this season.

“I think so,” he said. “We’re a young, inexperienced team, but I think we’ve come a long way from our first game. It can only go up from here.”

In goal for the Colonials was freshman Francis Marotte, who made his first career start and acquitted himself nicely, turning aside 34 of 36 shots. Marotte had earned some playing time and got a win in relief in the team’s opening weekend against RIT, but after senior Dalton Izyk went down with a head injury Friday night, Marotte got the call from Schooley Saturday morning.

“[He told me at] breakfast,” Marotte recalled. “It wasn’t too bad. I got a little bit of playing time at RIT, so I was kind of ready. I knew what it felt like. I just did my usual routine and prepared for the game.”

Schooley gave his first-year netminder full marks for coming in and securing a much-needed road point.

“He looked calm and he made it look easy tonight,” Schooley said. “I thought he was great. He did what he needed to do and made the saves he needed to make. He didn’t have a chance on either of the goals. Those were breakdowns on our part. He did a good job.”

“I’ve always been like that — trying to make the saves look easy,” he said. “The guys kept the shots on the outside. They made it easy for me. … They guys believe in me, so that helps a lot. At the end of the day, they dictate the kind of chances you get against.”

Marotte is pleased with his performance so far this year that has his save percentage at .954 and his goals-against average at 1.69 early in the season.

“It’s my first year. I’m just trying to get to the level here,” he said. “It’s been good the last two games but I can’t just sit back and enjoy that. I have to keep working on the details of my game every day.”

Freshman Michael Coyne made his collegiate debut, replacing Spencer Dorowicz in the lineup.

Robert Morris is now 1-2-1 on the season. The Colonials next game is Friday, when they open their home slate with Army at 84 Lumber Arena.